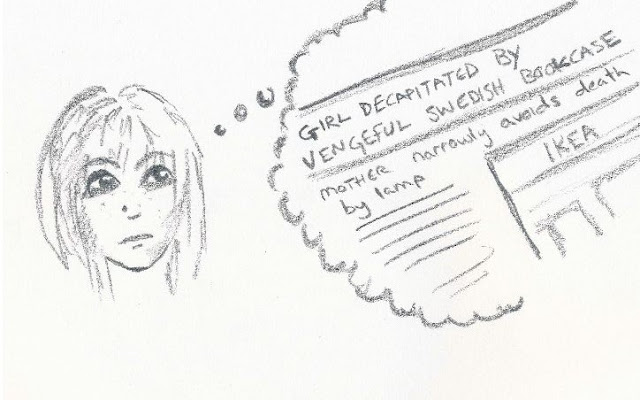 IKEA is just one big domestic. That’s what I discovered on a recent trip. In a moment worthy of any martyr, I decided to accompany my mother. She can’t survive Penny’s without a stretcher and some wine gums. So I knew she’d need me. Anyway we had a list, what could possibly go wrong?

This is how IKEA works. It’s a journey. They try and make you go through a showroom, then the market place and finally a warehouse. Each room looks like it could house the Titanic. You walk for miles. But we weren't going to be those people, oh no, we had a strategy. We would skip the showroom, high tail it through the market place and arrive early to avoid the masses seeking perfect lampshades.

It started in the curtain section where happy-ish couples stood huddled in pairs bickering.

-You don’t even care

- I do, I do, and I just think you should get the ones you want

- See you never give me any support

- Ok, well what about this one

- That’s hideous, are you blind, you could at least take this seriously

We skirted past, around, and between them. Grabbed what we needed. Lifted our eyes to the heavens, thank god we’re not married – poor sods, poor miserable sods. They’d made the rookie mistake, they’d entered through the showroom and they have already been trapped in here too long.

It escalated by the time we got to the warehouse, the women had their neatly tied back hair falling slightly forward (presumably from tearing it out); make-up wearing a little thinner, tone pitched a little higher.

-Oh, ehm, I saw it in the catalogue, it must be here somewhere.

-You didn't take down the catalogue number or anything useful

-I can’t bloody well do everything

We were as naive as to comment. Yes comment. It’s a pity they take themselves so seriously, it’s only a curtain sure couldn't they just pick another one, some people.

Five minutes later we can’t find what we are looking for. We can see the exits but we have not located the “rail with the basket thingy” as my mother so scientifically puts it. It transpires that she has caught IKEA fever. She can’t leave without it. We must find it. 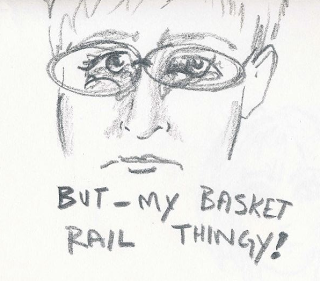 Fast forward an hour and I am sitting on a pile of boxes watching other customers whittle past, giving me the eye, the thank-god-you-are-the-one-trapped-in-IKEA eye. I feel like telling them their choice of embroidered cushion isn’t original. That EVERYBODY has had one going past. Everyone except the lady carrying a single plotted plant (you have to wonder what kind of personal problems she has to suffer IKEA for one measly plant).

All the “find it” computers have frozen from our frustrated efforts of keying in “rail thingy”. I’m trying to look innocent as other customers tap them in vain; can they arrest you for corrupting the IKEA computer system?

Eventually Mother finds her rail in the showroom that we had strategically avoided. We knew IKEA was laughing at us, she’d combed back through the entire place for her sin of avoiding their neatly arranged sofas.

But we were willing to give IKEA this one. It was only an hour’s delay and we are set for freedom, exit signs ahead. We were spirited, laughing, throwing our hands-up in a that-wasn't-so-bad fashion.

We crush into the elevator to freedom: couples that entered hand-in-hand are now standing about a meter apart. Both looking frayed at the edges and you can only overhear snippets of what they hiss at each other.

-You had your chance

We smirk. We survived without so much as an argument. These here are lesser mortals.

We get to the car; on the way helping some frail looking old ladies along the way. Feel like we've done our good deed of the month, helping others escape.

Then it happens. Our great escape falls to the floor. We've lost the keys in IKEA. We are carting around half their plywood range and we have no keys. There is no way out. I sit on the flat packs again. Watch the other customers file past.

- Maybe she likes sitting on boxes

I do well not to hurt them. She returns with keys a good half an hour later.

-I had to go through the whole place twice, someone eventually handed them in.

-I’m not saying you’re hopeless, but-

-Will we grab food when we pack it all in, I am starving. We can relax.

So we do. We grab lunch in the famous IKEA kitchen, which looks more like a canteen with a penchant for cheap sandwiches and mushy peas. At this point we know people must exaggerate. They eat here in sheer relief that the shopping part is over. IKEA cashes in on their fatigue, makes them feel like it’s a worthwhile experience.

We leave lunch, laughing. Can you imagine? We think we are free. We can’t find the exit sign though. End up going through the entire store again. We sprint through all the shortcuts. Muttering, no, no, no, you can’t make me buy anything else.

We get in the car, whiz out. Pay little attention, turn left or right or some wrong way. Think we are on the road to the motorway. We are blasting the radio, singing silly songs and then we round a corner only to see the monster that is IKEA grinning back at us.

We swear as always that we will never return. Never, ever again. Just like last time. Why in the name of croissants would we subject ourselves to that again?

But in a year or so it will have faded, the trauma will seem like something we made up. We’ll consider it, decide that the lighting fixtures are cheaper, Sarah got her very useful wardrobe there and the food is allegedly – amazing. So you go. Yes you do. You decided to spend the day cavorting about with Swedish furniture and furnishings. Your house will look modern, embroidered, and chic. After all who doesn't want their home to look like plywood grows from the floorboards? 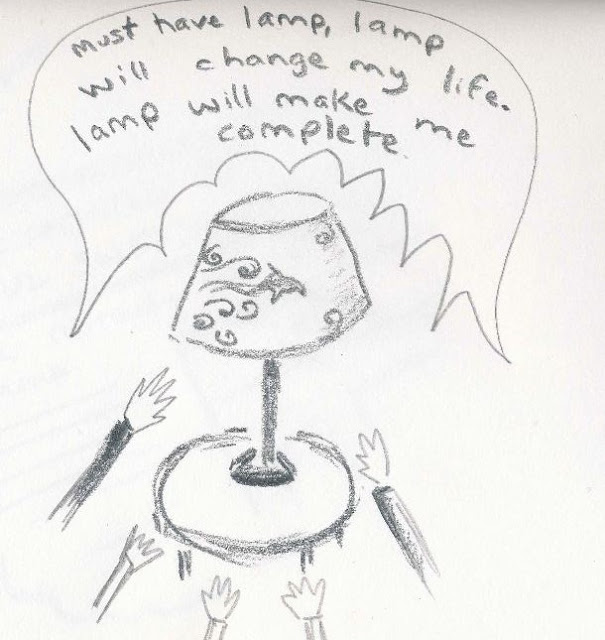 Posted by With all the Finesse of a Badger at 4:24 AM 1 comment:

The most hideous place to be on a Monday is in school (in a Geography class) at about the age of thirteen, where nothing matters except that spot on your chin and the fact that you think everybody saw you stumble beside your locker at 9.01am. Well more specifically that Mr. Mathews saw you stumble and that due to your blush he has more than likely figured out your secret crush.
Suddenly, as happened to me on one such occasion, there is a moment of light. Your teacher stops warbling and offers you a ray of hope.

Read more »
Posted by With all the Finesse of a Badger at 10:00 AM No comments: