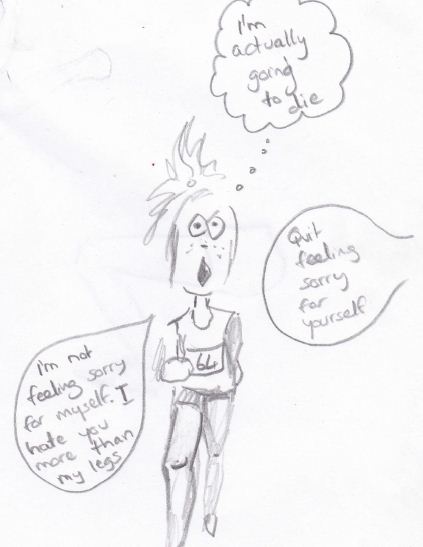 “That’s the way to roll,” I’m sorry but this just makes me envision a bunch of  people having a tumbling competition down a hill. 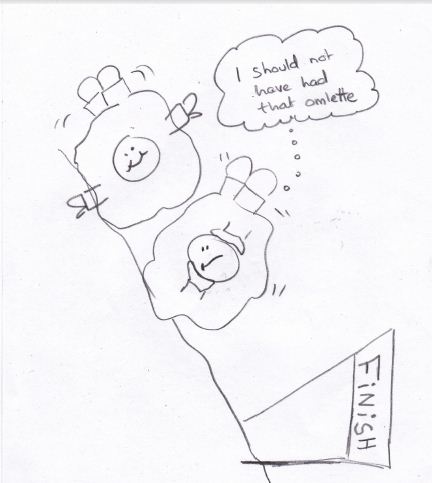 “Suck it up,” What does this even mean? If I was in the water pit of the steeple chase maybe- and even then it’s probably contaminated water and therefore sucking it up is just advice. 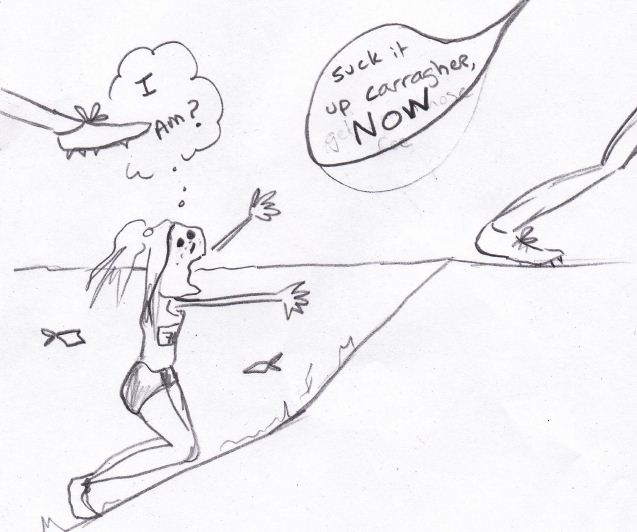 “She’s behind you,” If she’s not in front of me. She’s clearly behind me. But you know what, thank you. 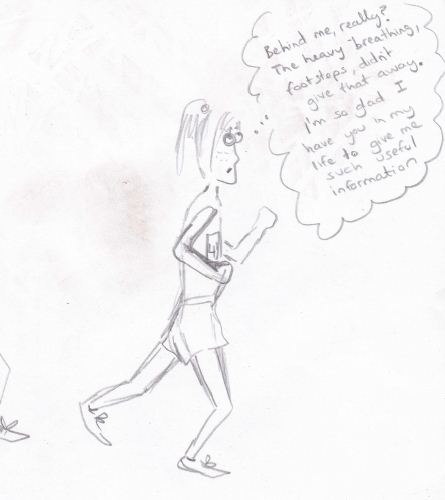 “Get On Your Horse/ Get Off Your Horse,” This was used interchangeably by one of our college coaches. The effect was that we weren't sure if he wanted us to speed up or slow down. 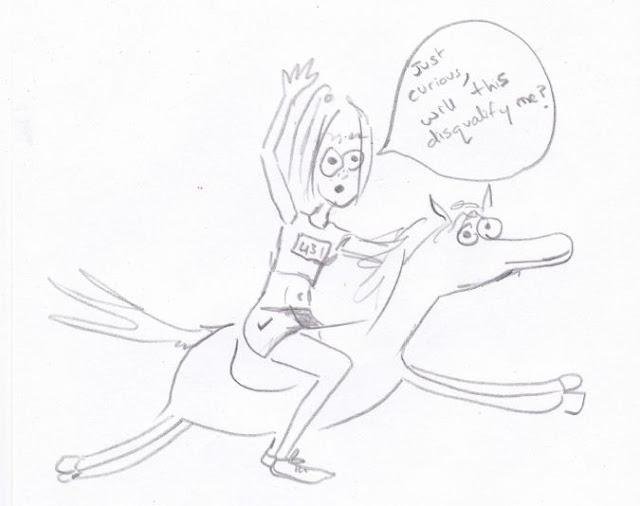 “Move your legs,” That my friend, is a great strategy. 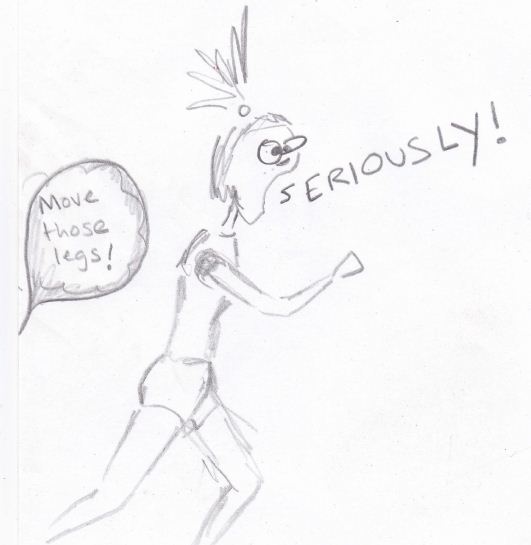 Posted by With all the Finesse of a Badger at 3:47 AM No comments:

The Twenty-Four-Year-Old I Was Supposed To Be...

When I was eight it seemed like I would have everything by the time I was sixteen. It was right there on American TV shows. Sixteen was the age you got a boyfriend, car, job and school became a side note that was simply hanging out with friends. Then by that same measurement twenty four appeared to be the age you got married, had some sort of puppy, baby, cars, and a successful career as a hip-hop dancer. I took sometime to take a look at my eight year old aspirations and cross-reference them with my current situation and well this is what happened.... 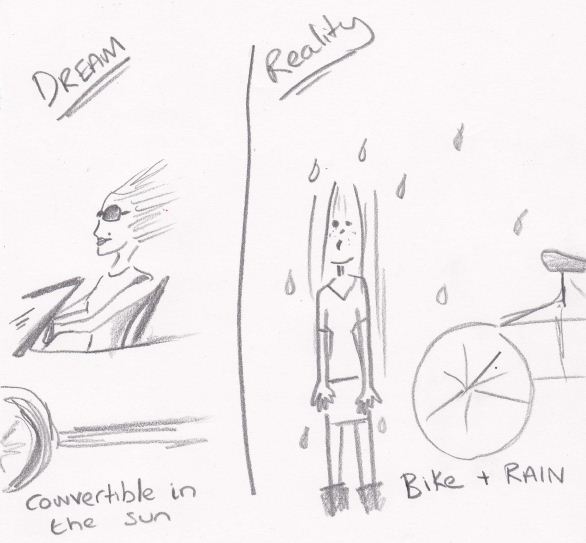 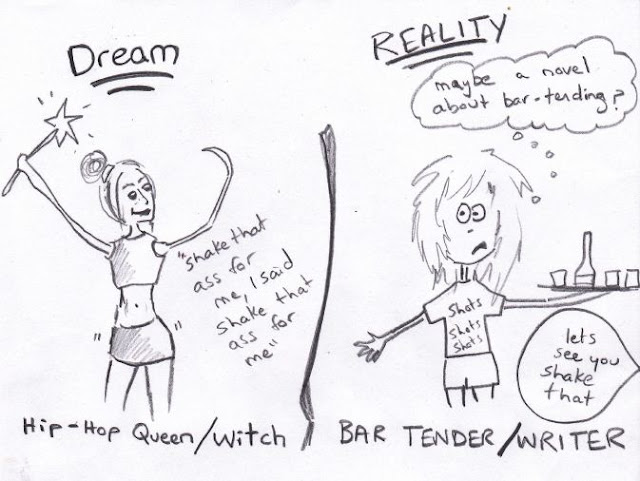 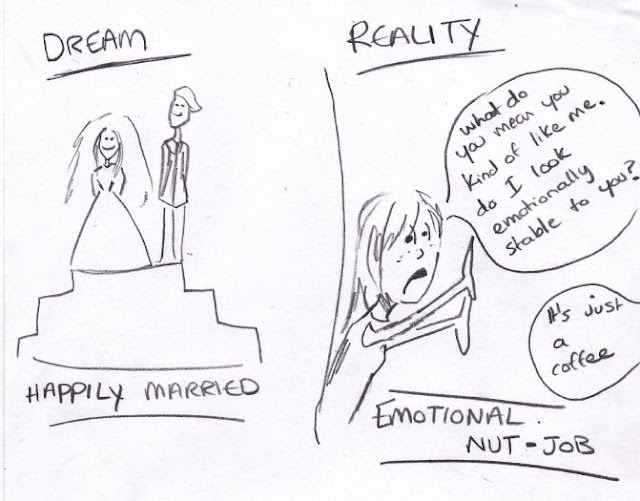 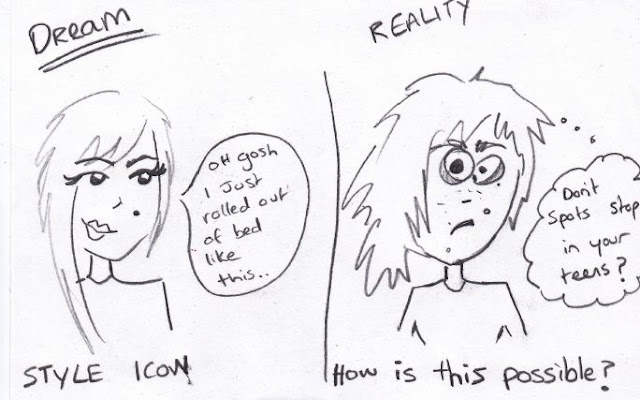 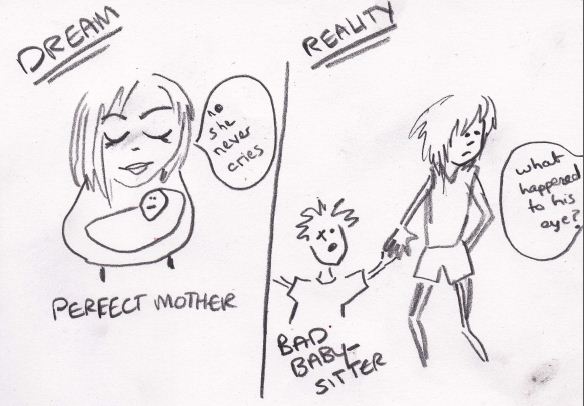 7. Ability to Look After Other Organisms: 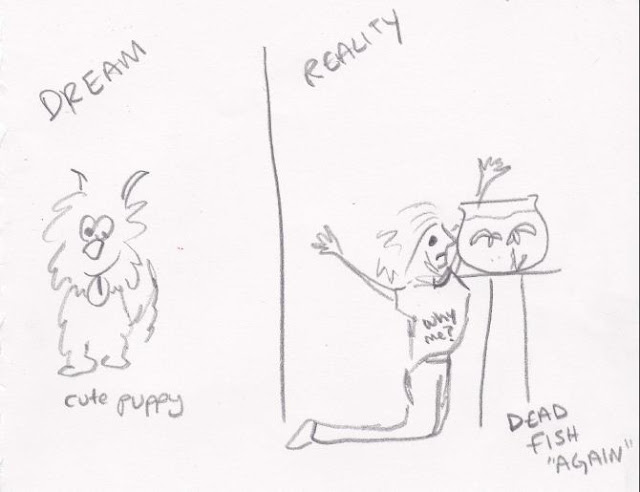 Posted by With all the Finesse of a Badger at 8:52 AM No comments:

I Will Be Champion of The Morning

Sometimes I decide that I will be a super-human and get up at five am and do one hundred things before the day starts. I snuggle up in bed and envision tomorrow. I think yes, yes, yes I will be champion of the morning. 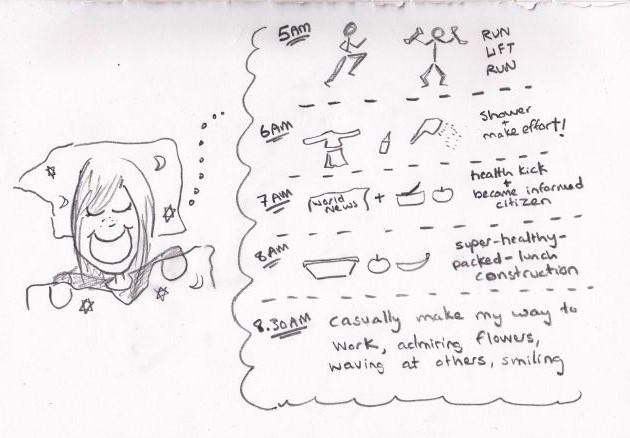 I reconsider and reset and then at 6 am when the alarm sounds again...

So I reconsider, recalculate how long it will take me to find my brain and reset the alarm, when it sounds again, this happens for a further forty minutes... 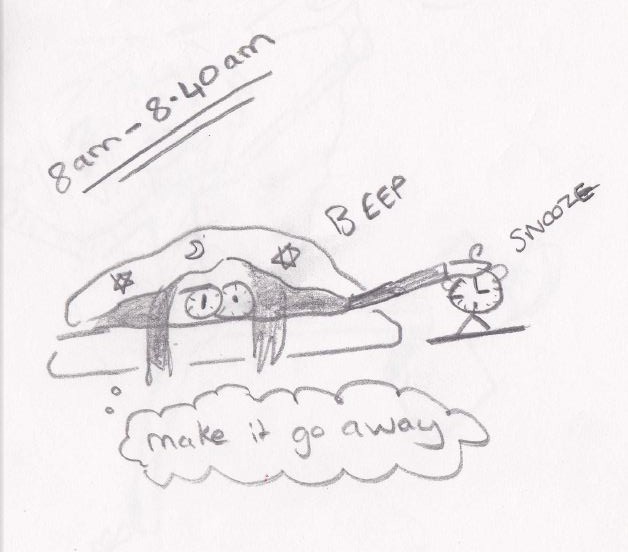 At precisely 8.40 am I realise things have gone too far... 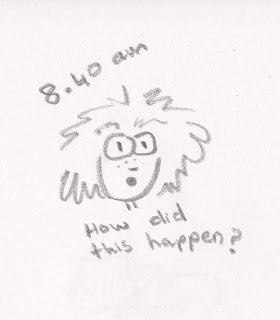 And I become Champion of Multi-tasking... 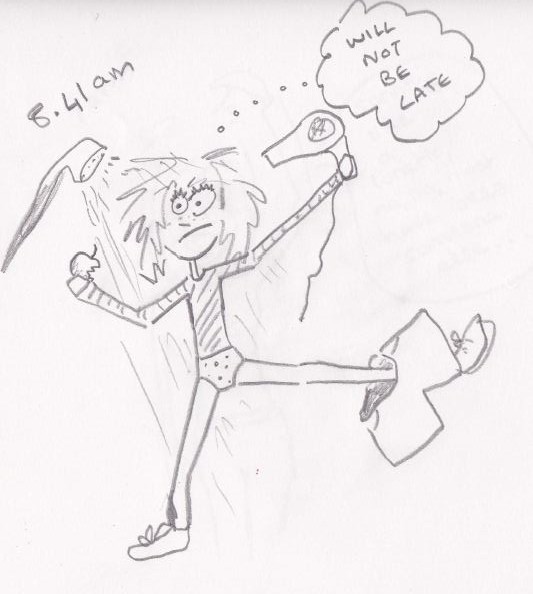 And by 9 am I have managed to arrive causally at work and convince everyone but myself that I am indeed Champion of the Morning... 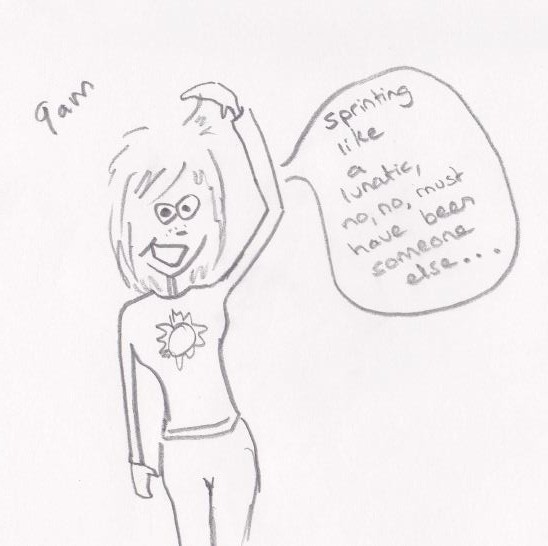 Posted by With all the Finesse of a Badger at 10:11 PM No comments:

The Day I Killed my Childhood Hero 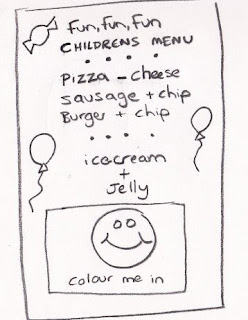 I’m a murderer of dreams. Not just any dreams, my own. I first came to this realisation at four years old when I found myself responsible for the assault and death of my, then, life long hero.

We were in the Killarney Ryan Hotel: one of those grey Irish establishments that promise you family-fun in the middle of nowhere. We were minding our own business eating dry-pizza or some other delicious cuisine deemed “fun” for under sixes, when the heckling began.

There were ten year olds near by and they were shouting abuse at an approaching figure.

I sat with my mouth hanging open as Barney the dinosaur shuffled forward, waving at everyone. It was like having a dream come true. My mother told me to go up to him but I was terrified that he wouldn't like me, shy of this giant dinosaur that cavorted across our TV screens on a daily basis.

He was making his way towards some steps. The restaurant was on two levels with a small set of steps dividing them. As he approached the step the ten year olds got louder and louder. Shouting insults at the poor dinosaur, 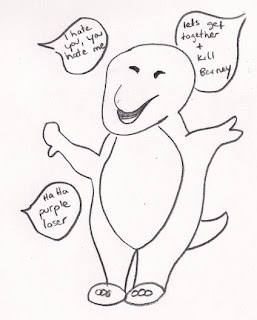 “You’re so big and purple.”

I was needless to say very upset with this behaviour so I decided to show Barney that someone still loved him. I raced forward and threw my arms around his legs to give him a reassuring hug. Only thing was that he reached the small step just as I hit his legs and went toppling over.

We both sat in the middle of the restaurant. I was blinking at a man in a purple dinosaur suit. The fall had caused Barney to lose his head.

“You’re not Barney,” I cried. Sitting in shock and wondering if Barney was all a lie. To make matters worse I was surrounded by ten year olds laughing hysterically and telling me how funny I was. I cried for a considerable amount of time. My parents would later explain that this was a pretend Barney, but nothing could take away the feeling that some part of my belief in that childhood hero had died. 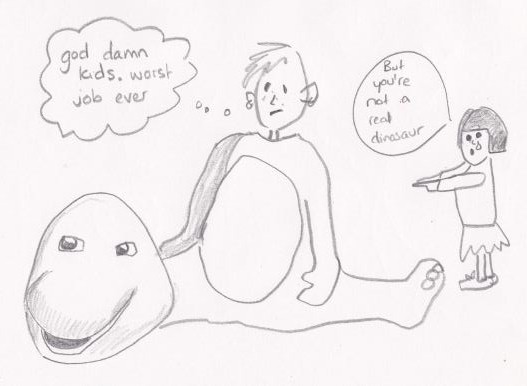 Posted by With all the Finesse of a Badger at 10:30 PM No comments:

My sister and I were cold. It was a long Irish night and the heating wasn't working. We were curled up on the couch beneath duvets and hot water bottles moaning about how hungry we were. 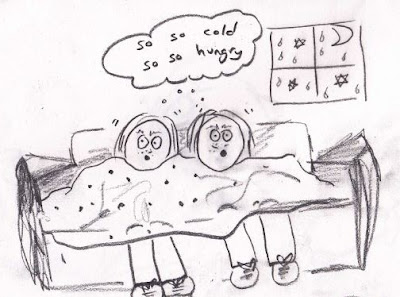 But the kitchen was so far away and there was nothing particularly motivating about a tuna sandwich. In fact all we had was tuna, onions and ingredients for things that required effort to make.


Then we had a brainwave.
"Can’t you make cake in a cup in the microwave or something? " 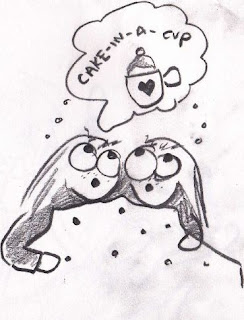 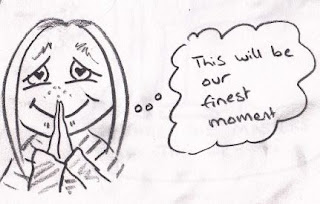 We forgot everything about being cold and miserable and lazy; we rushed to the computer, got a Google recipe and started. We didn't have everything so we made a few executive decisions

Sure olive oil and vegetable oil are the same thing.

Raising powder is over rated anyway? 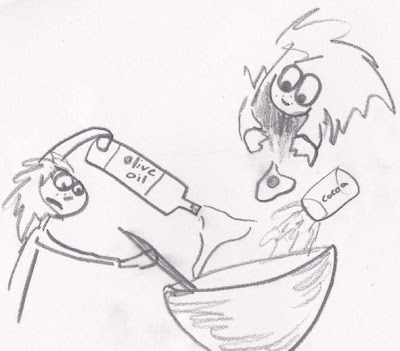 We got so excited we did a little spoon inspired dance. 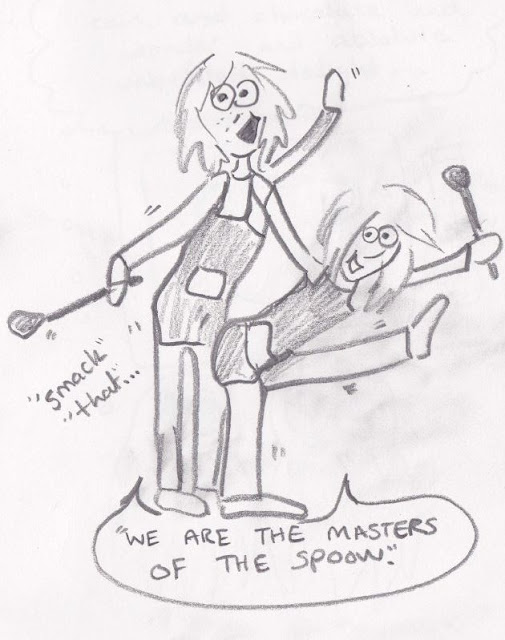 When we were finished the cake wouldn't fit in a cup. We had to put it in a saucepan.

It took ten minutes in the microwave, the ten longest minutes of our life. We discussed the cake. 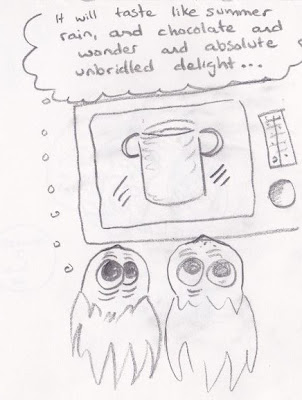 Then the moment came, we dug our spoons into the saucepan and breathed in before taking substantially large mouthfuls. 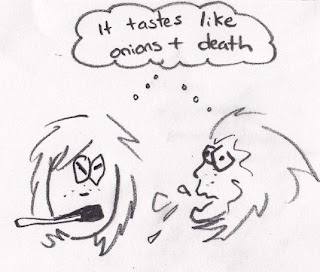 We sat a moment and considered the situation…. 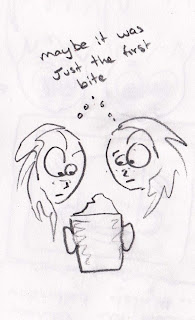 So we tried it again and simply resigned ourselves to disposing of the cake-in-a-cup. After all that we retired back to our blanket on the couch... 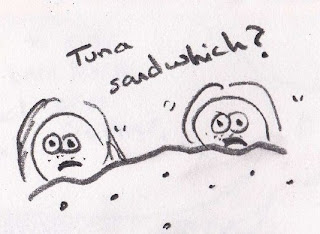 Posted by With all the Finesse of a Badger at 2:38 AM No comments: