Translation of the Things Parents Say

“Because I said so…” Translation: I have no idea why, but if you don’t I will staple you to a wall and make your life misery. 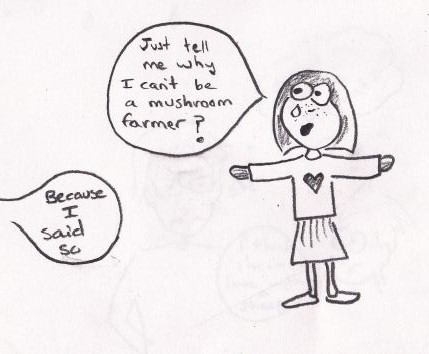 “In my day…” Translation: Followed by what we can assume is a gross exaggeration. 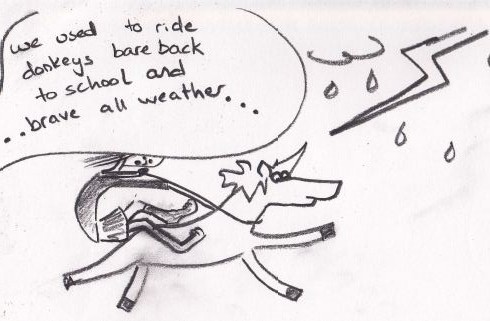 “Go to your room…” Translation: I have no idea what else to do with you, so go where I don’t have to look at you and consider my incompetence in this situation. 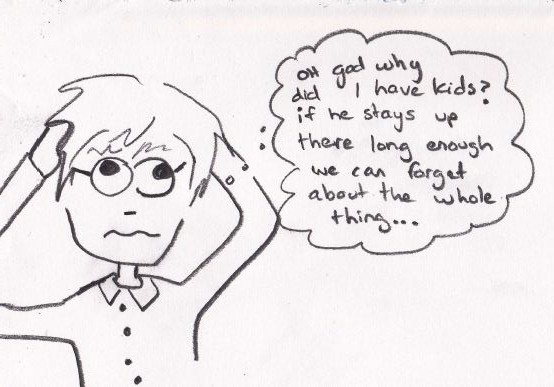 “You can tell me whatever it is…” Translation: You can tell them, however note they've not stated what reaction they will have. 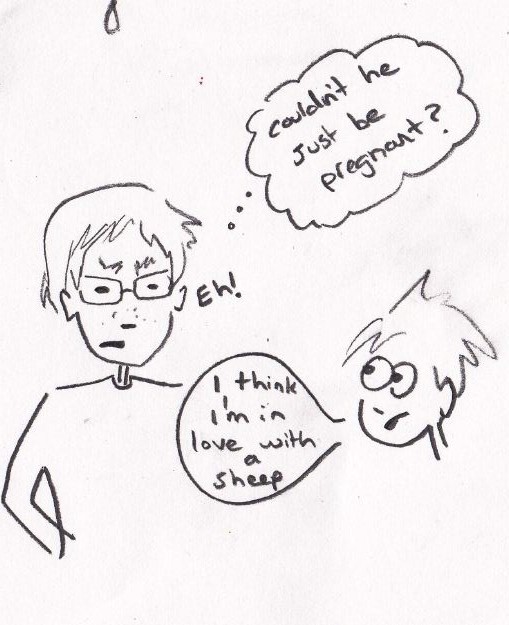 “What did I tell you about that?” Translation: I can’t remember where I stand on this issue please remind me. 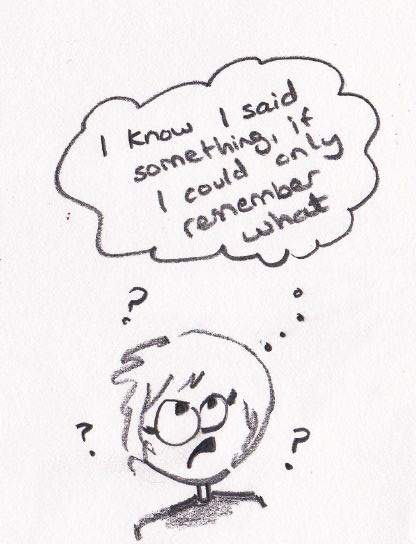 Posted by With all the Finesse of a Badger at 2:12 AM No comments:

Finding Out if Your Hamster is Actually Dead. 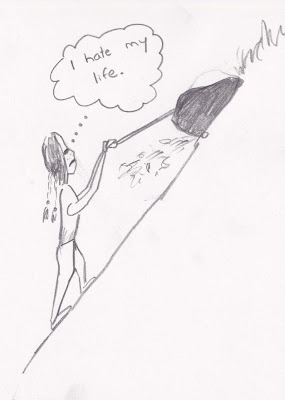 I was supposed to be babysitting my youngest sister and mowing the lawn at the same time. At thirteen I was seething with the injustice of having to ensure the safety of my accident-waiting-to-happen sibling and juggle pushing a lawnmower about the same size as me up and down the hill. The hill was too steep to push the lawnmower across without it tipping over and suffering some sort of mechanical combustion. So there I was heaving the damned contraption up the hill when my sister emerged bawling her eyes out.

“Baggins is dead,” Baggins was her beloved hamster who she had long meaningful conversations with. As you do at ten.

Me: “Jesus Nan it’s probably just hibernating, there’s no need to be so dramatic.”

So we went to her room, where she trembled as she pointed at the small furry lump. I examined it closely, tried to feel its heartbeat, gave it a poke in the stomach, lifted up its limp paws.

Then I came to this sound conclusion: “Hmm…we can’t be sure, you don’t want to bury it alive or make a fuss, what if it’s still breathing, when 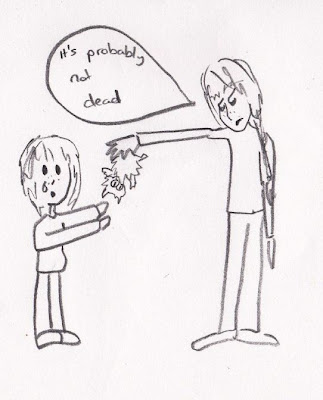 they hibernate their heart rate goes really low and loads of people bury their pets when they are really alive.”

I was at that age where I spent all my free-time wrapped in a book and I was sure I’d read this somewhere.

“Well don’t tell anyone and if he starts to smell in a few days, then we’ll know he’s dead.”

So that’s what we did and I forgot all about it. In my head the hamster was obviously just napping, no big deal. My sister cheered up by googling stuff about hamsters hibernating and was delighted that her Baggins would wake up any day now.

Then it happened. My mother was cleaning out her room a few weeks later and noticed the smell. She had a look in the cage and was horrified to find Baggins looking like he had been dead for sometime. She came downstairs to ask Nan how she had failed to notice her decomposing hamster.

“Alvy you said what?” my mum screamed.

“Well it smells, can you not smell that, it’s cold, it’s rigid, how much more dead do you want it to be?”

So the potentially hibernating hamster was buried and my sister was even more upset having had to go through the shock of losing Baggins twice.

In retrospect, given my track record with animals, she probably shouldn't have asked me in the first place. 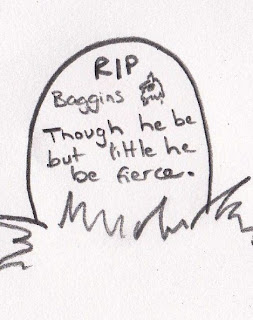 Posted by With all the Finesse of a Badger at 1:53 AM 1 comment:


1. Super-Sonic-Selective-Hearing: This is most notable in ones formative years. You could be standing beside your mother screaming about how much you need a new dress for the party and she won’t even blink. But then stand at the other end of the house and whisper that you are bored into a pile of pillows and you will be rewarded with enough tasks to dispel any boredom for the foreseeable future. 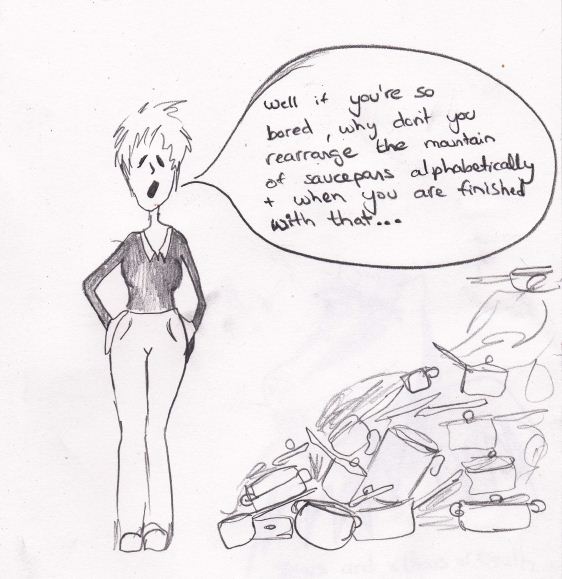 2. Something-Bad-Has-Happened-Sense: This might also be described as the capacity to worry far too much. But it results in mother’s ringing up every so often, even when you are in other continents, shrilly asking “Is everything OK  what happened?” You can then update them on the devastating discovery of a worm in your apple earlier that day or perhaps your latest break-up or job loss. 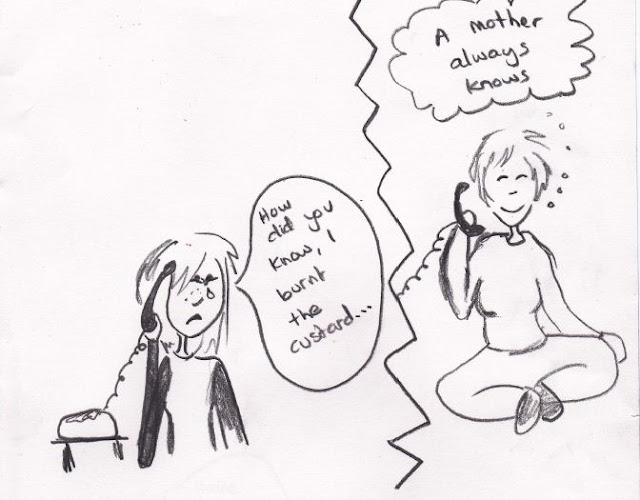 3. Voice-Moderation-That-Always-Heightens-Volume-At-Most-Embarrassing-Sentence: It doesn't matter what age you are this super power has the ability to send you shrinking back into your own skin. Whether it’s a helpful question about whether or not you've remembered to wear underwear when you were eight or shouting down the super Market aisles at sixteen: “Do you need any tampons or anything?” 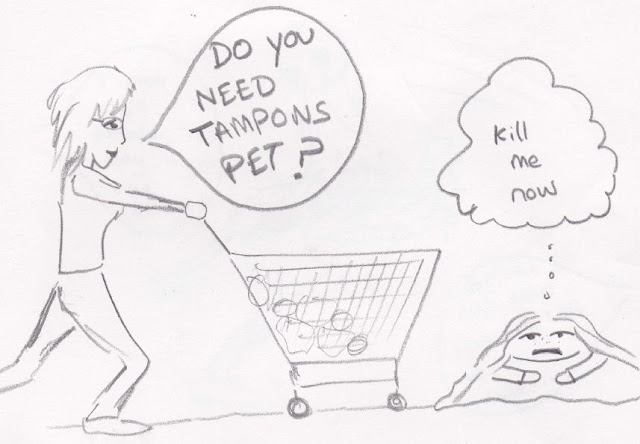 4. Deluded-Child-Belief: This can be a either a power or a hindrance. All mothers’ think their child is meant for greater things. This spurs their children past their initial inhibitions. However it can result in children pursuing things they are less than suited for in an effort to please their proud mothers. 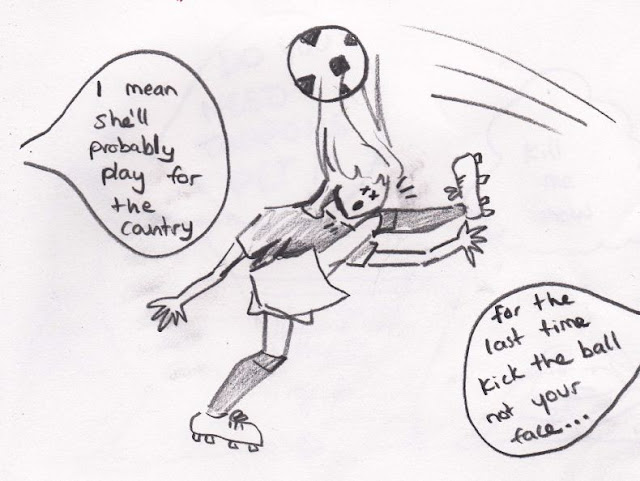 5. Automated-Tidy-Mode: This seems to be a default setting, where nothing can be done until things are tidy. This is why tidying your bedroom takes up so much of your childhood. It later results in mothers renovating entire rooms of the house for the home-comings of their grown-up children. 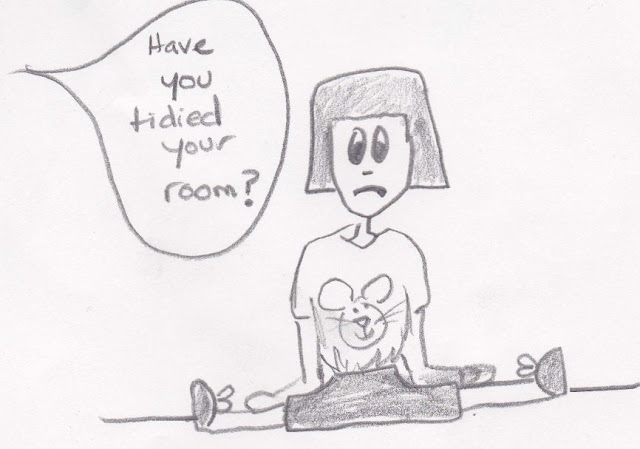 Posted by With all the Finesse of a Badger at 3:11 AM 2 comments:

How Not to Make Your Holy Communion

When I was seven I made my Holy Communion. It seemed like a big deal at the time, even when I look back it seems kind of like a big deal today. When else do you get to dress up in a big white poofy dress and have money and gifts thrown at you? There’s your wedding, if you want to get all pedantic, but even then you have to share it all with a significant other. But Communions are all about you. And Jesus, I forgot about Jesus. 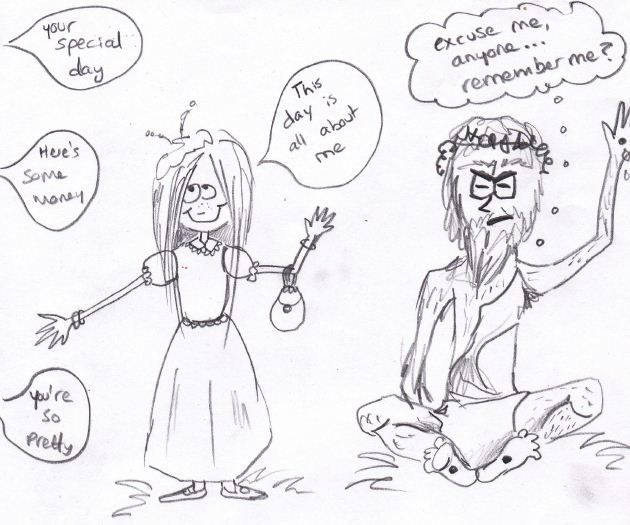 On my big day there was a series of unfortunate events. Firstly in the run-up, it took tears and sweat and all sorts to find a dress small enough. Back then I was rebelling against growth in general and the top of my head was at the shoulders of everyone else my age. When we found the dress my mother had to saw half the flowers that had been stuck all over it off as she thought they were “tacky”. I remember having to sit around in a dressing gown all morning and not touch things, for fear I would ruin the dress. 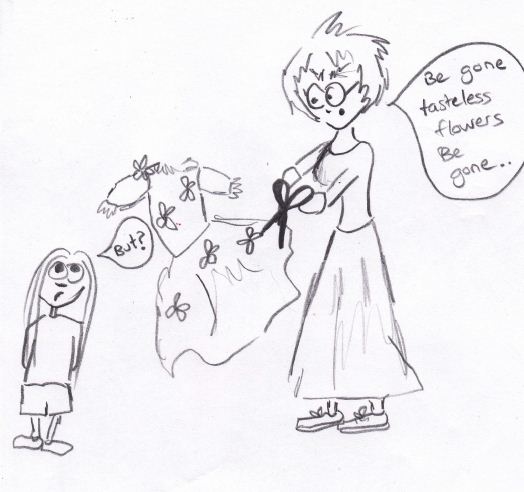 Before we got to the church we had to wait for my grandparents to arrive. Presumably they got stuck behind a herd of cows or some other countryside obstacle. This meant we were late. There was the dramatic swinging open of the church doors as I flung my and shuffled into my seat. 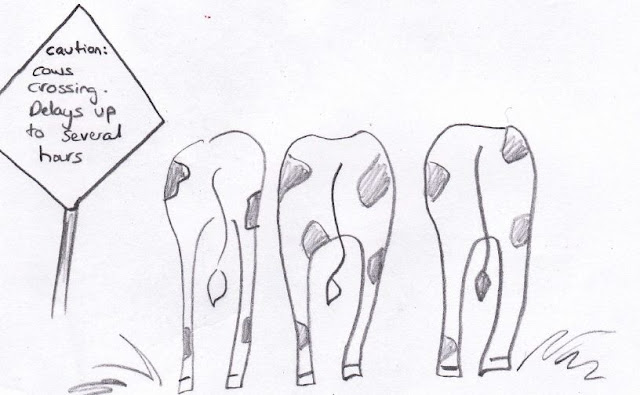 When the priest said “I’m glad you could make it Alvy”, I went crimson and remained that way for much of the ceremony. 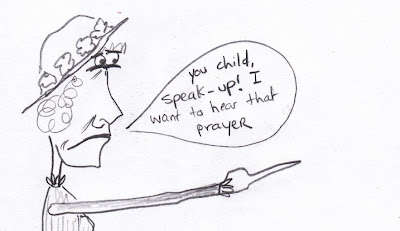 We had to say small prayers to the congregation and I was first to get it out of the way. Someone complained about my prayer (Who does that? Who makes a complaint mid-ceremony about the way in which a seven year old is delivering her prayer of the faithful?). So when everyone else was finished, they turned the microphone up and I had to repeat the entire thing, shaking and trembling and glowering in the direction of the congregation so that whoever complained would know my wrath. 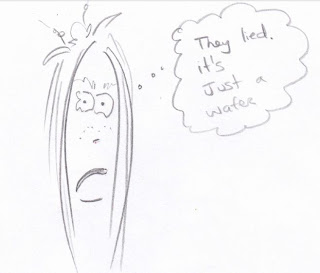 For whatever reason, I had also imagined that the communion itself would taste like white chocolate buttons. So you can imagine my disgust upon receiving it for the first time to realise it was actually just another piece of dry wafer similar to the ones we had been practicing with. I’m not entirely sure why we were practicing sucking pieces of wafer but the teacher was quite insistent at the time. To save face I still told my younger sisters and brother that it was the best white chocolate that they would ever taste.

My final breech of etiquette came when our neighbour tried to slip me a fiver. I was always listening to her chatting to our mother about her money problems. So it seemed only natural to tell her: “No you’re grand, you can’t really afford it.” Needless to say she didn't take it too well… 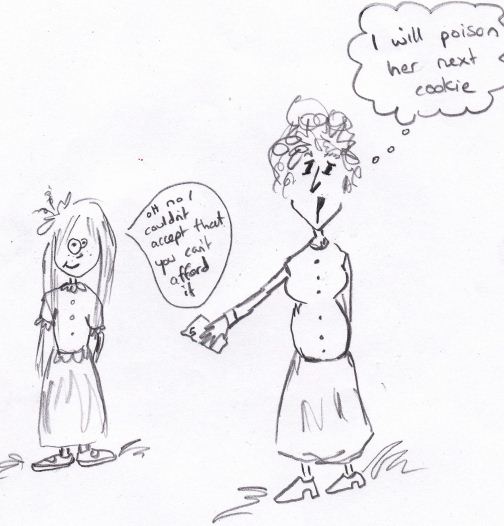 Posted by With all the Finesse of a Badger at 2:56 AM No comments: