When Becoming a Blanket is the Only Answer

It all started with the electricity bill. Which was everybody and nobodies fault all at once. 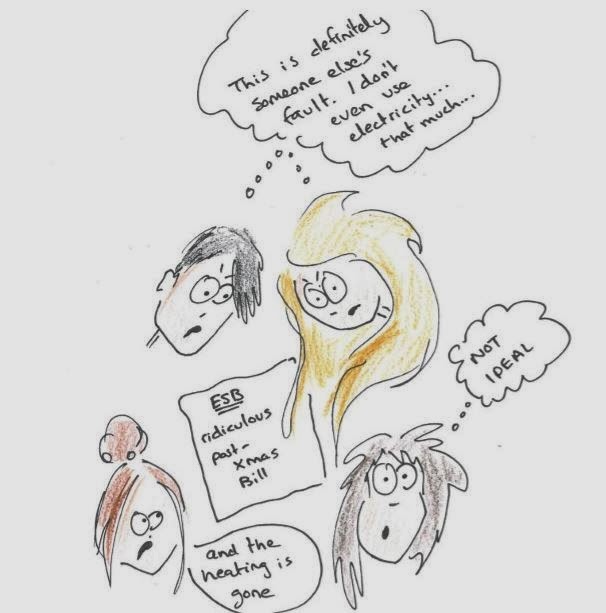 This was bad. We didn't turn on each other though. We all shuffled off to our various rooms and sulked. But then the really horrendous thing happened. The heating died. Ours is not the sort of house that retains heat. It sort of eats it and spits it out the windows. As each of us realised our rooms were becoming slowly more refrigerated we emerged in our various cold-proofing outfits. 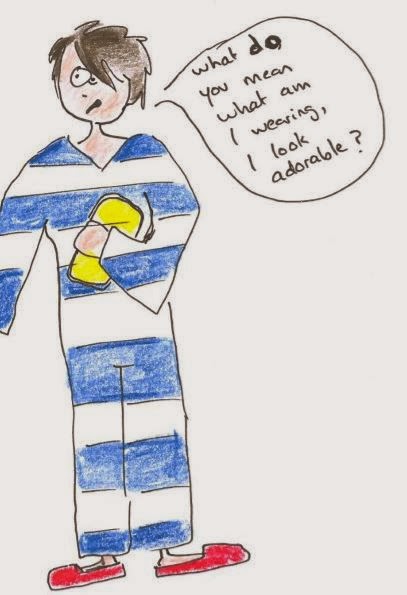 It got to the point where I looked like a walking thrift store. 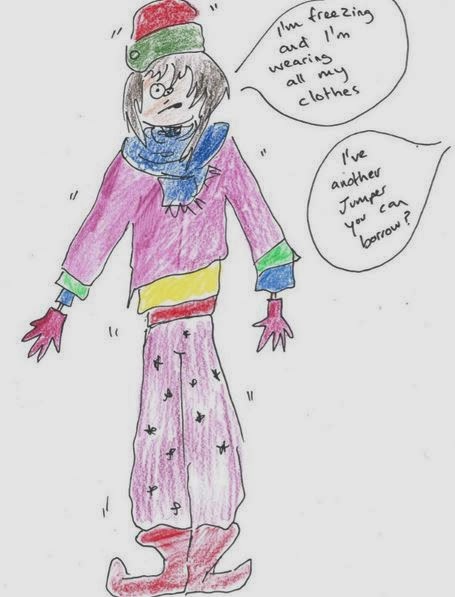 It then escalated to the point where I could not actually move my arms. 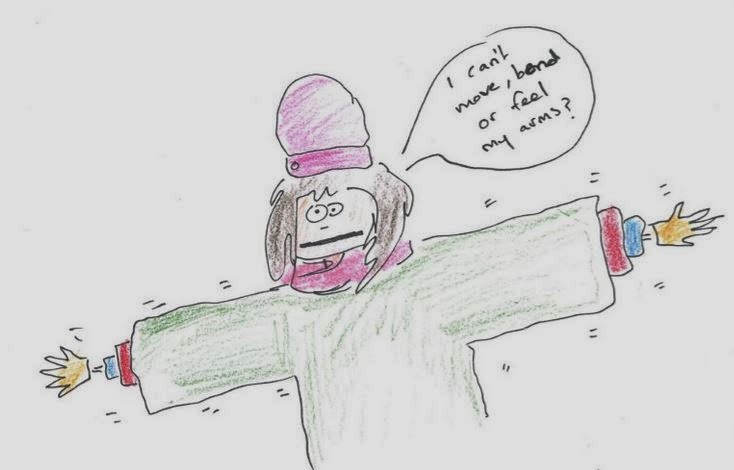 I was insistent that despite all this we should remain positive. That running and being proactive was the answer to this Frankenstein-type January that was trying to bring us down. 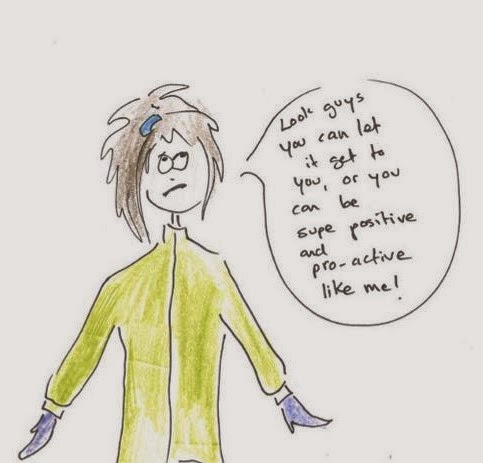 I was spending most of my time curled up in bed writing. This was quite cosy until my hot-water bottle started leaking. 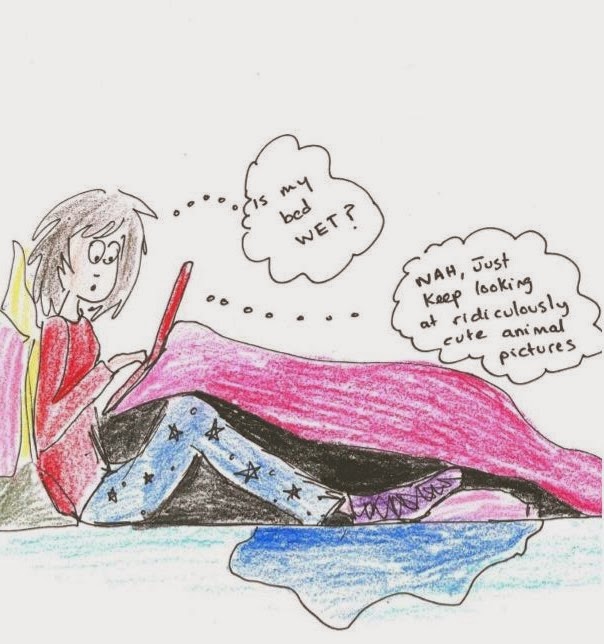 Any normal person would have checked to make sure they weren't just imagining the bed was wet. But I kept typing, sure I was just being dramatic as my bed got soggier and soggier. When I finally realised that I was indeed sitting in a rather warm and soggy puddle of water, I of course had words with the deflated excuse for a hot-water bottle. 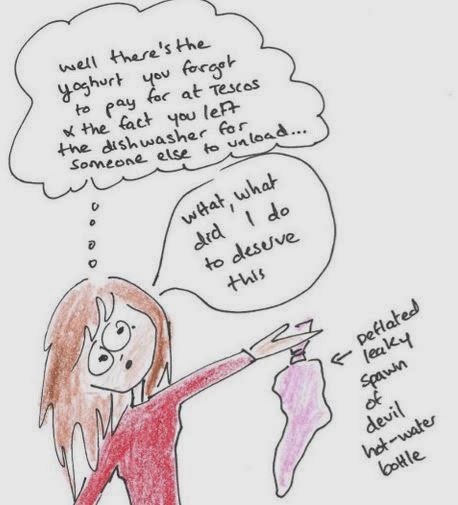 I then spent the night huddled in one corner of my bed feeling more than sorry for myself. With no hot-water bottle and no heating it felt like the cold was settling in my lungs. 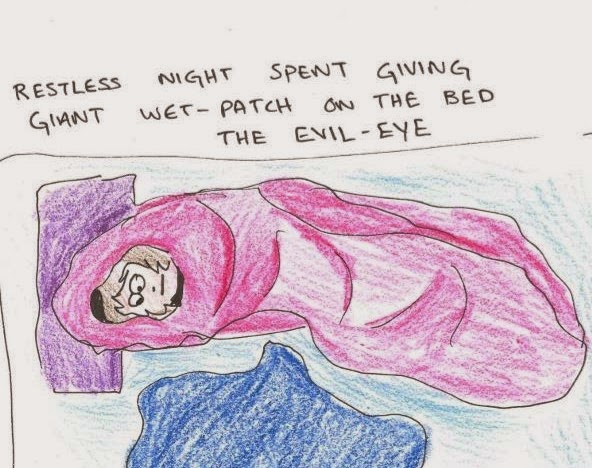 But I was still determined to make sure January wouldn't get me down. So I decided to go for a long, long, long run. This would a) dispel all bad feelings towards the month and b) ensure warmth for the duration of the run. But then this happened... 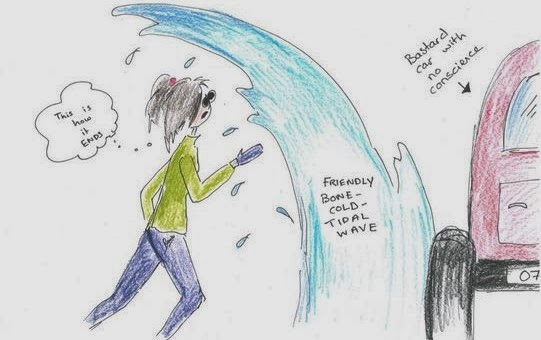 By the time I got home I was soaked to the skin and colder than when I'd started out. 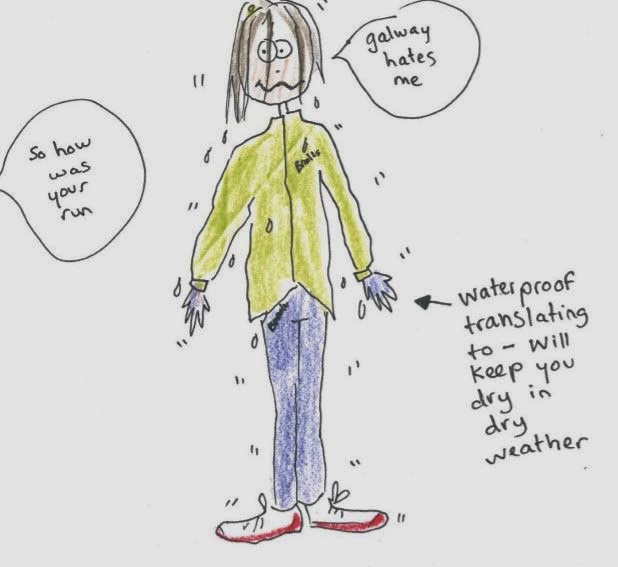 I then spent a couple of hours clutching the kettle in search of warmth. 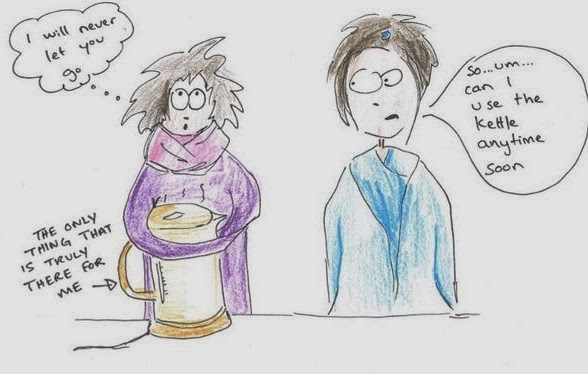 Shortly after this I decided to retire to my blanket and stay there until the cold has passed. 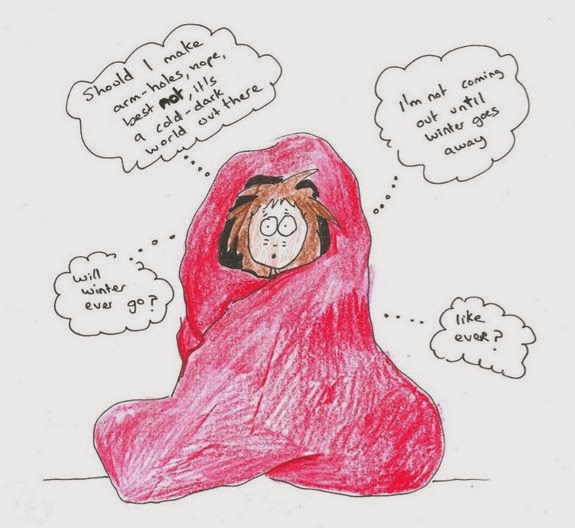 Posted by With all the Finesse of a Badger at 2:46 PM 8 comments:

January is a terrifying time of year. Someone has to say it. Otherwise we'll all go around thinking this is normal, that it's OK that we do this to ourselves on an annual basis. I'm just as bad as everyone else. It's like a weird zombie apocalypse movie out there- just less slashing and no heroes. 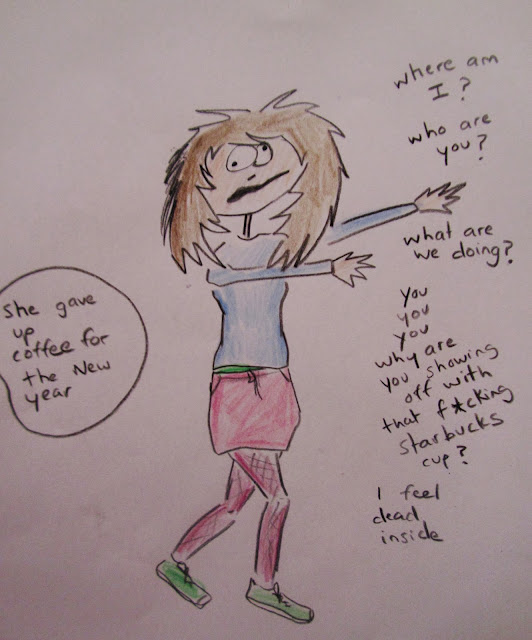 There are just so many of us roving about in the various stages of our withdrawal symptoms. Mothers chewing curtains because they've renounced sugar in all its forms, people twitching at their desks and falling asleep on their keyboards because they've quit coffee, arthritic looking twenty-somethings wander the streets after taking up jogging. 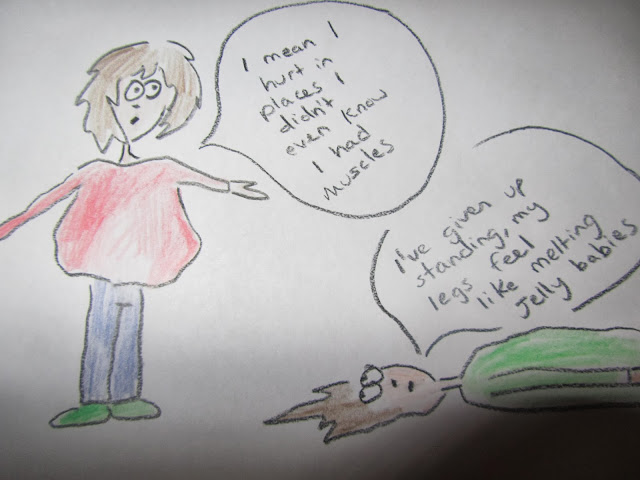 The smokers glowering at their cats because it's easier to blame a cat for a sense of loneliness than the absence of tobacco. 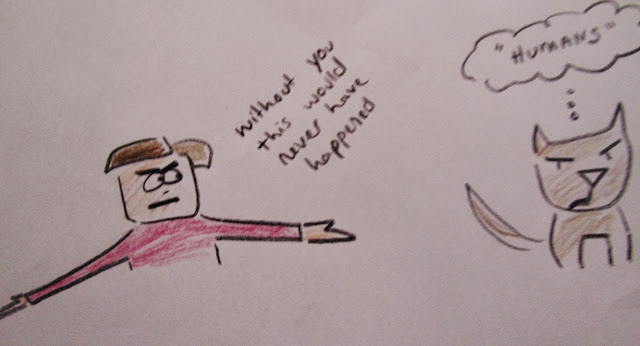 And then there's the breakdowns, the so-called failures. 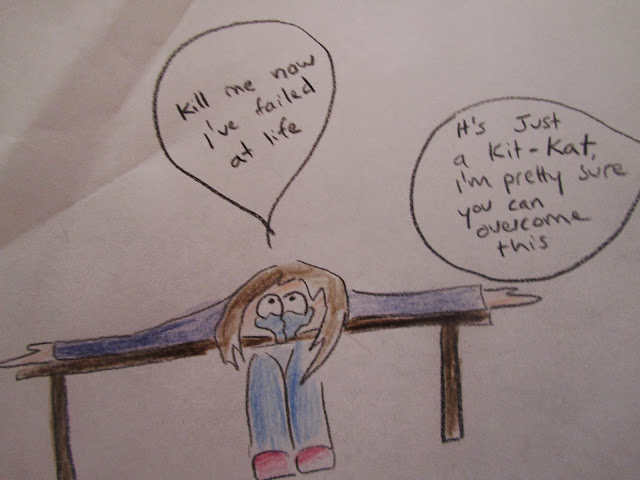 The people that thought ANYTHING was possible, but then tripped on a doughnut on the way home from boot-camp.Then there's the people who after giving up whatever crutch they were using, be it sugar or caffeine  related,  realise they have feelings and attempt to eat all of those feelings in one sitting. 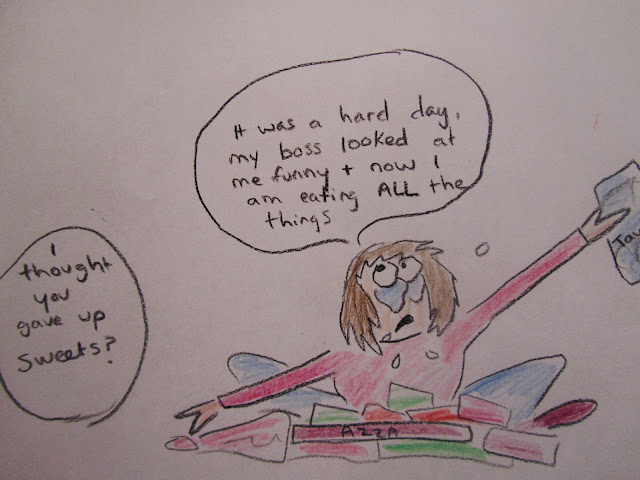 However none of this is as  annoying as the people who simply proclaim they are going to be better people without ever specifying how. 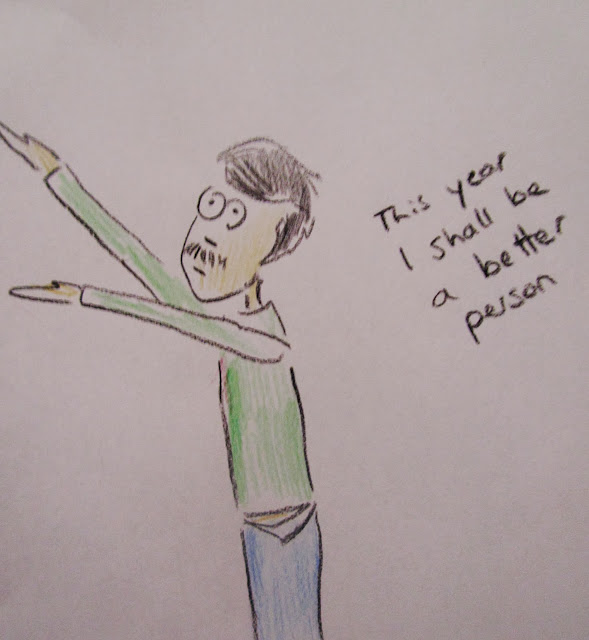 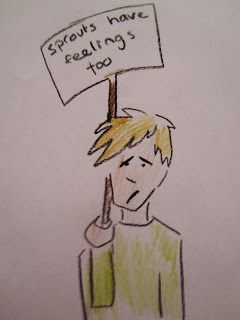 Or perhaps they simply seek to emulate someone they feel is better such as their favourite sports star. 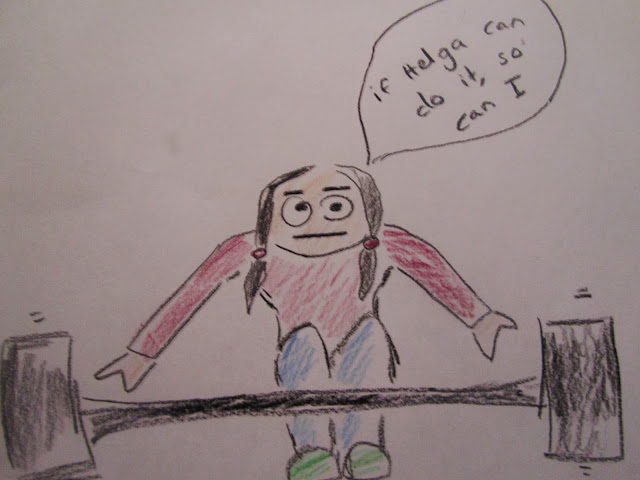 It's all a little ridiculous really. All this time dedicated to telling people HOW we are going to better ourselves and it makes January a scary time in all our lives. There are consequences besides a nation of zombies. Think about it: Mars Bar vendors might go out of business if we're not careful- and they have families too. Or what about the increased sense of smugness in the world. As all the people who decided to become lactose-intolerant for the year yammer on about Soy Milk and how their complexion has never been so vital.

And what do we achieve really in January. Lose a few pounds of fat and gain a few of self-righteousness. People feeling superior as their less successful friends weep over the potato slathered in butter that they danced with last night. 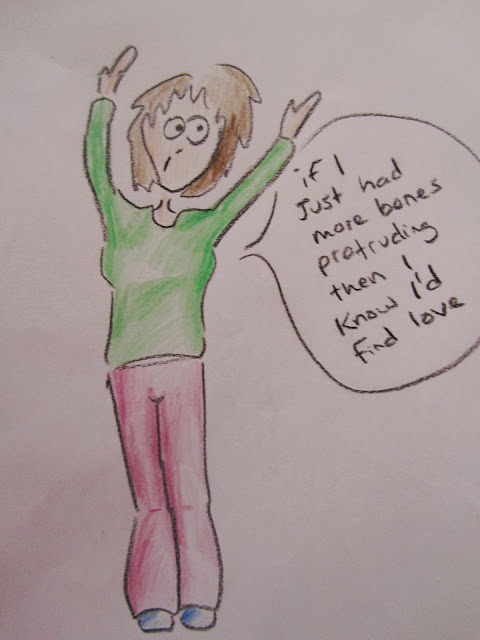 I mean the way I see it New Years can be this big scary thing with all these terms and conditions or we could decide to do it differently. Be a little kinder to ourselves and stop the zombie-esque apocalypse. It could be as simple as this: I shall no longer answer the front door with a hot-water-bottle stuffed up my jumper because it's unfair to shock people with what appears to be a very sudden and unexpected pregnancy. 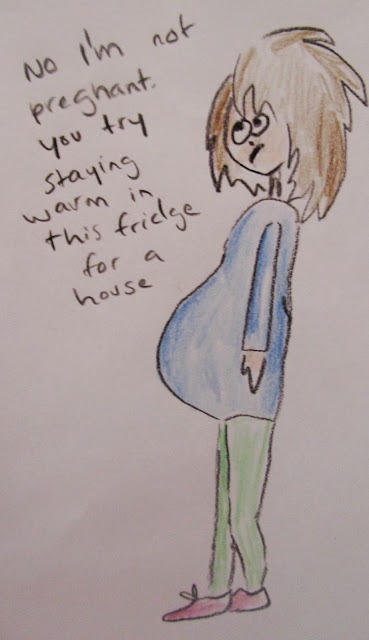