The Quest to Build a Bridge

After Christmas, there's a grace period where you are allowed to exist in a food coma. Not in my family. My mother and uncle decided we were going to build a bridge. They got very excited. They did not seem to notice how we all became more like caricatures of  sullen teenagers than actual people. 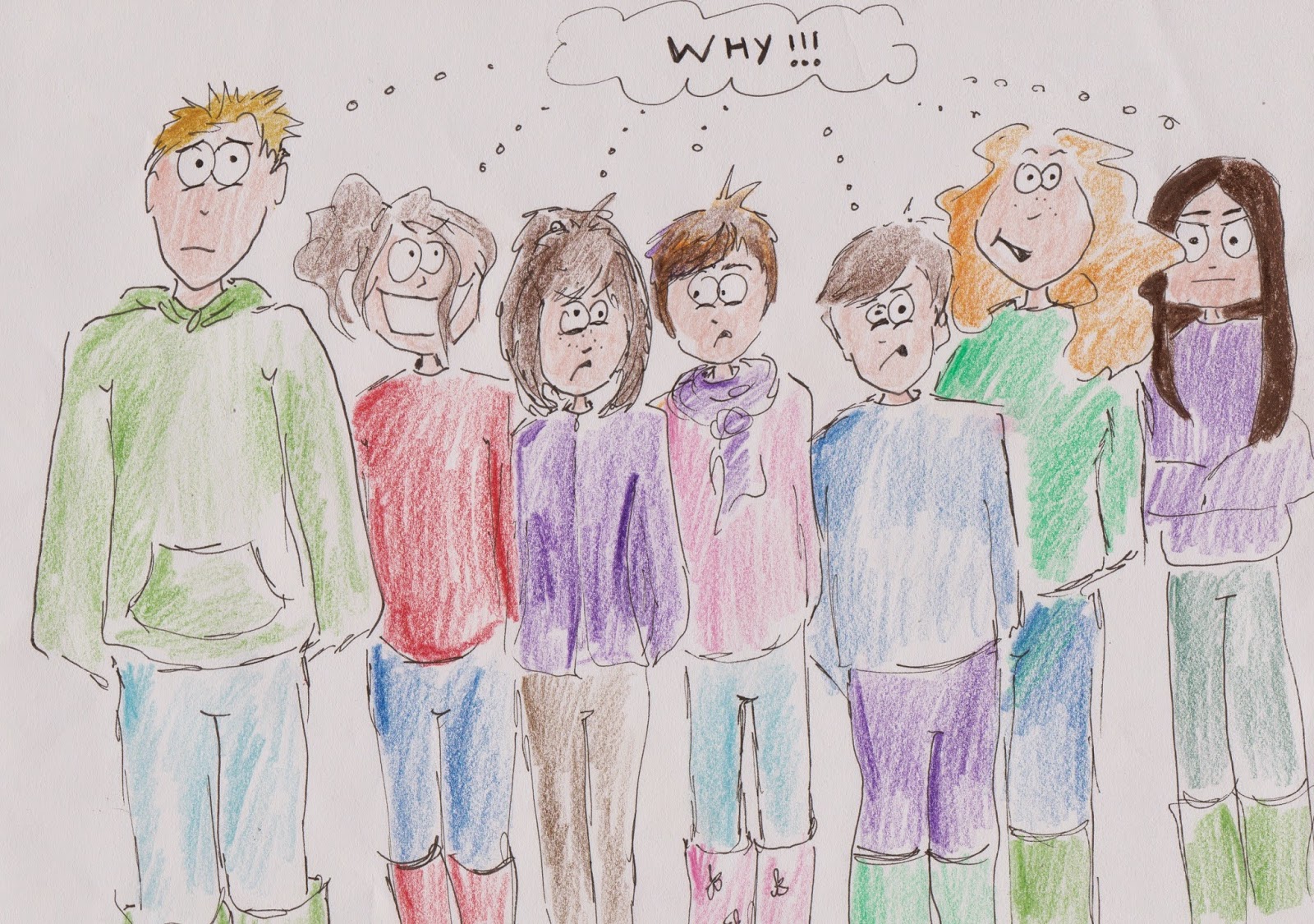 We could not crush the excitement of my mother and uncle. They were filled with such glee at the thought of trekking across the countryside to rebuild their childhood bridge. 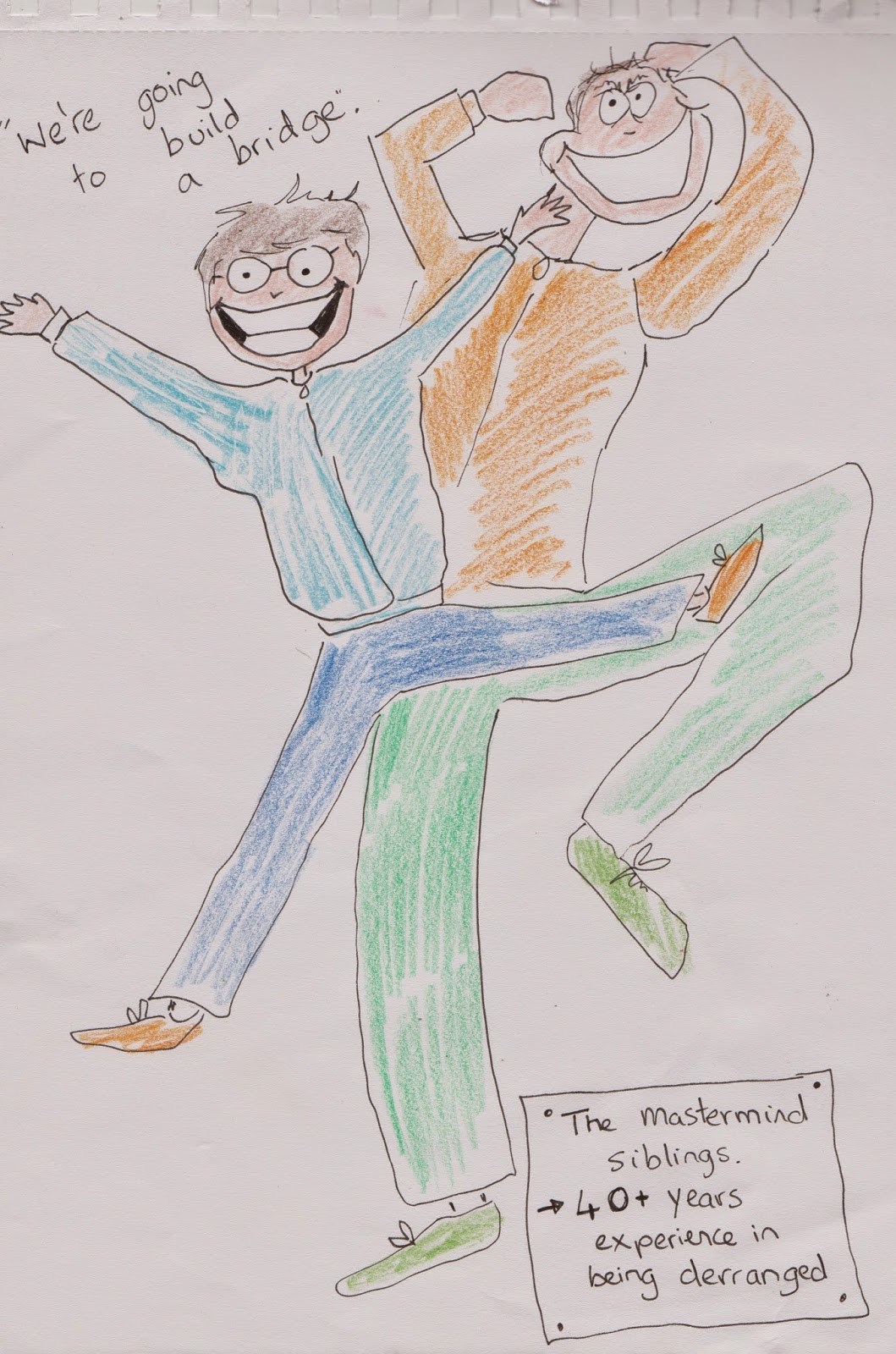 We went along with it. We assembled a motley crew. Our team resembled something closer to all the people that would die in any horror movie, ever, than an actual group of people that could build anything in real life. After my uncle (who actually does build things and therefore is the only person that should have technically been there), my teenage brother was the next most suitable person for the task at hand. 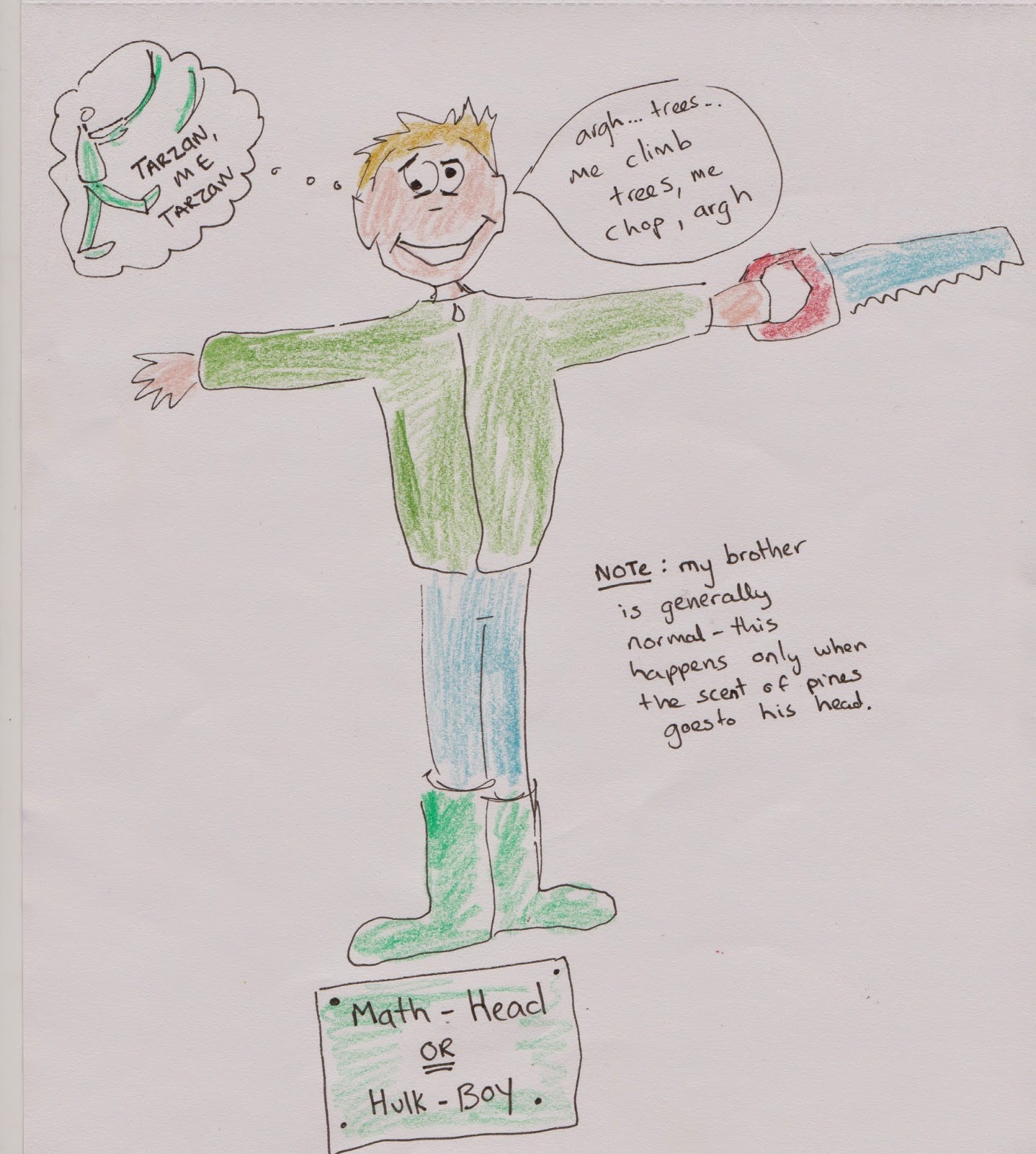 He is remarkably good at being strong since he hit puberty. Before that we were able to beat him up. After that, in terms of usefulness, is my Mother and then my youngest Sister. My youngest sister thinks that because she used to be able to beat my brother up - she is stronger than him. She spends all her time, trying to prove this. Even though he has all the muscle, she still manages to do impressively manly things out of sheer determination.

After that we are all pretty much terrible at bridge building and would be the people that would die first, if this was an actual horror story. This is not a horror story. We lived through the entire debacle and nobody was even a little bit harmed. The rest of our crew, in no particular order, looked like this: 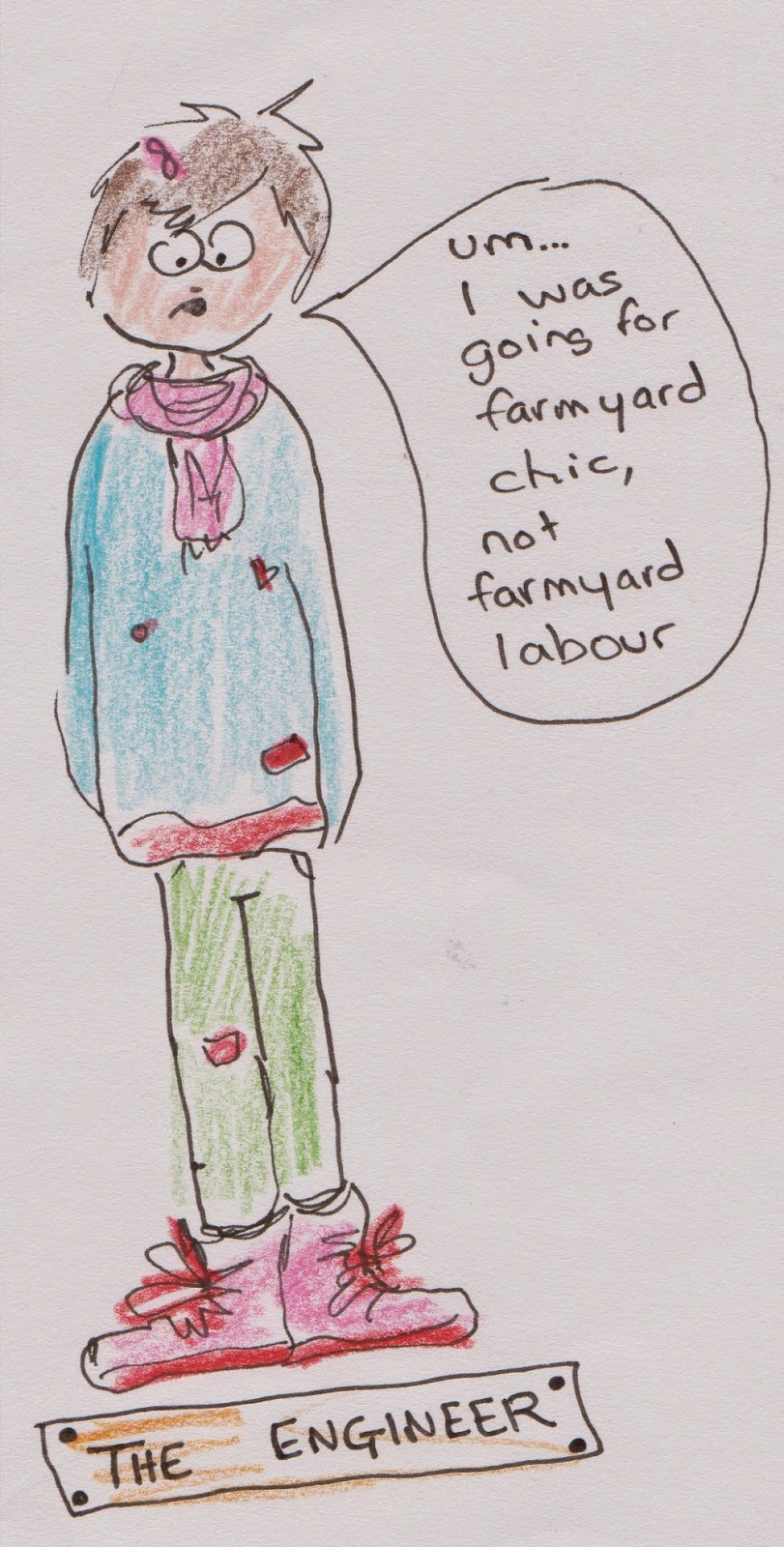 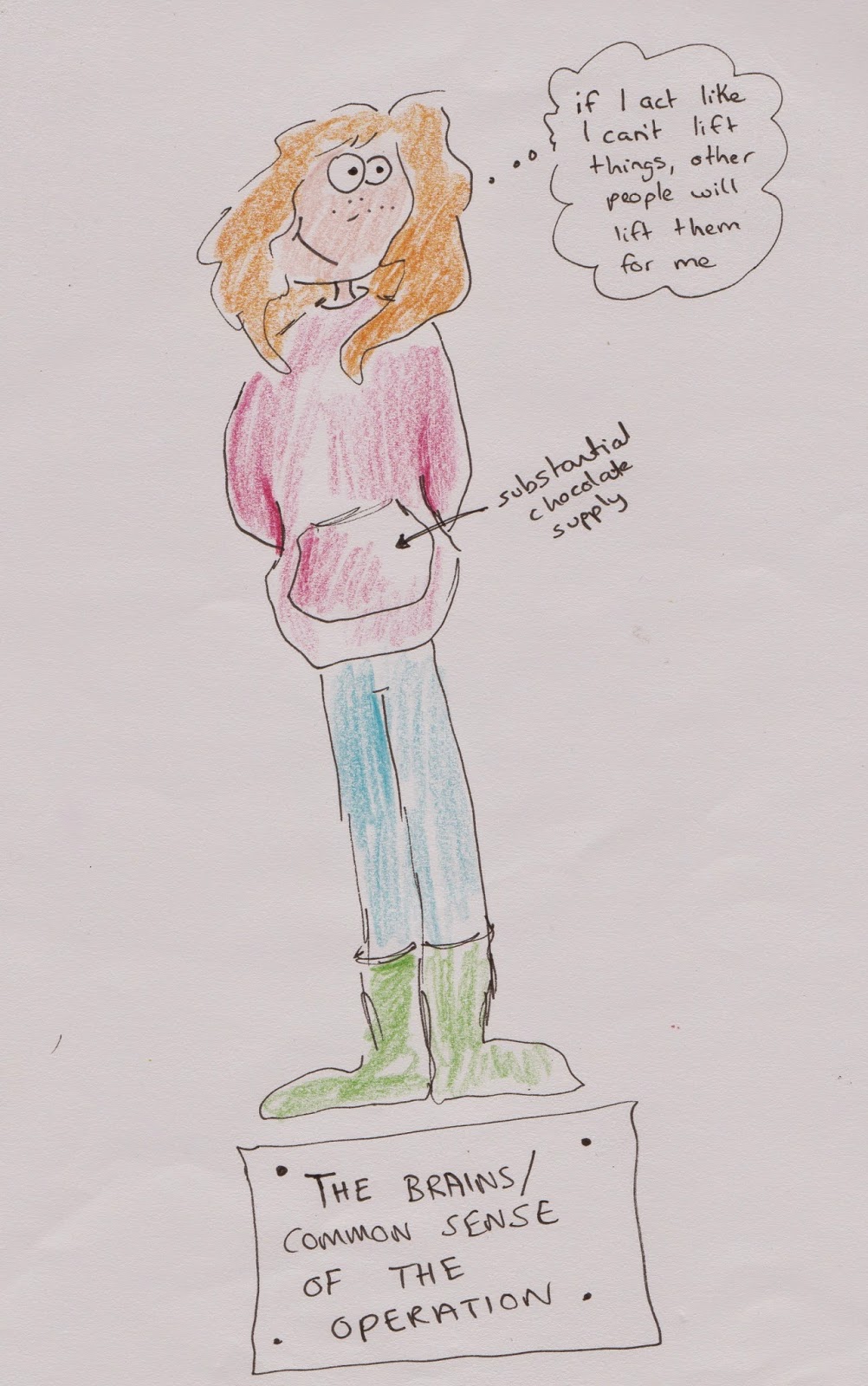 My family knows the importance of having a full cast for all adventure stories. So we also brought along a dog, because that's what happens in all the Famous Five novels. 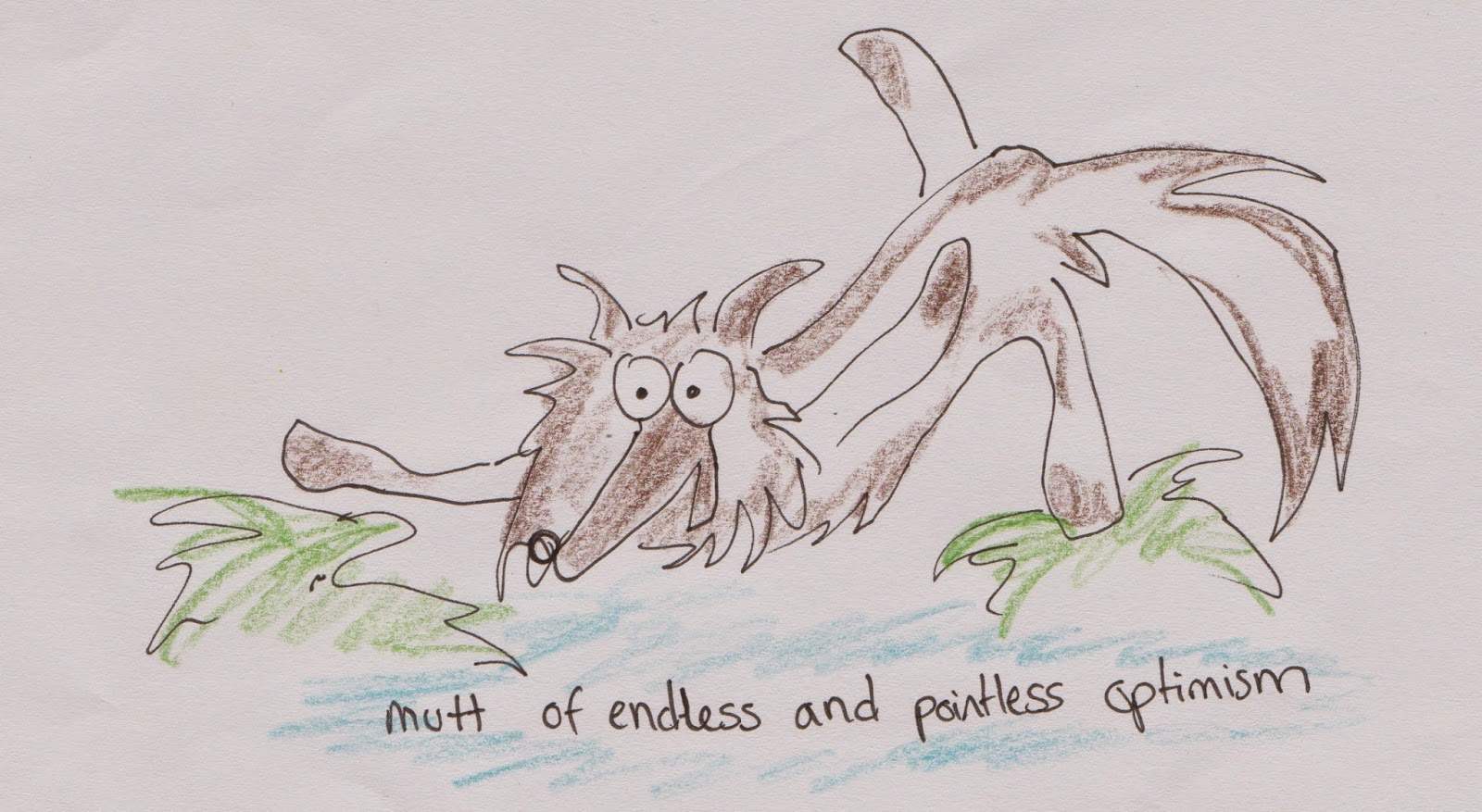 Before we could set out, it became clear that some of us were inappropriately dressed. We were promptly given old giant clothes from the pits of my Grandmother's house. We looked ravishing. 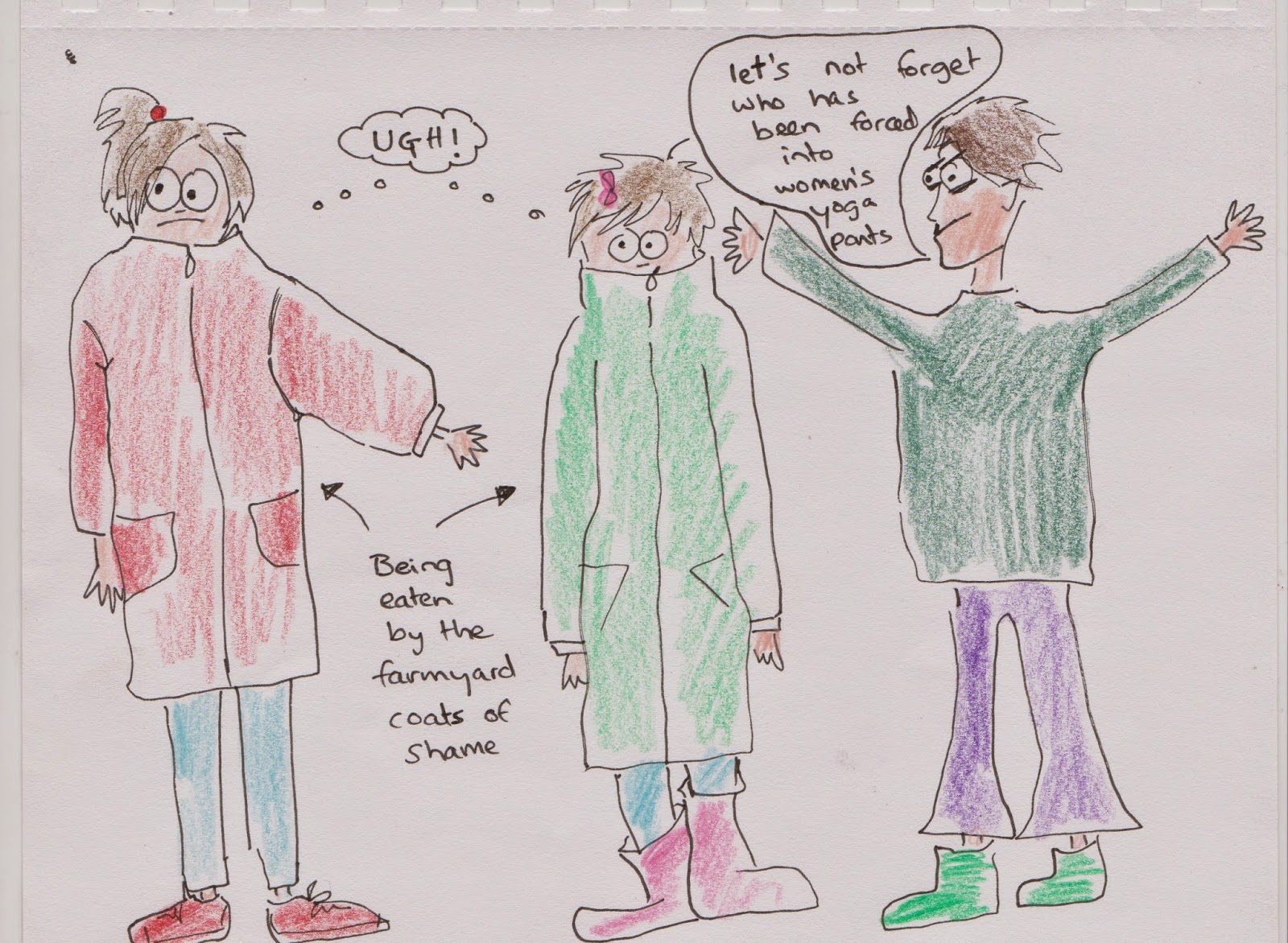 My uncle then took out the bridge-building tools. All of the tools looked excessively dangerous. 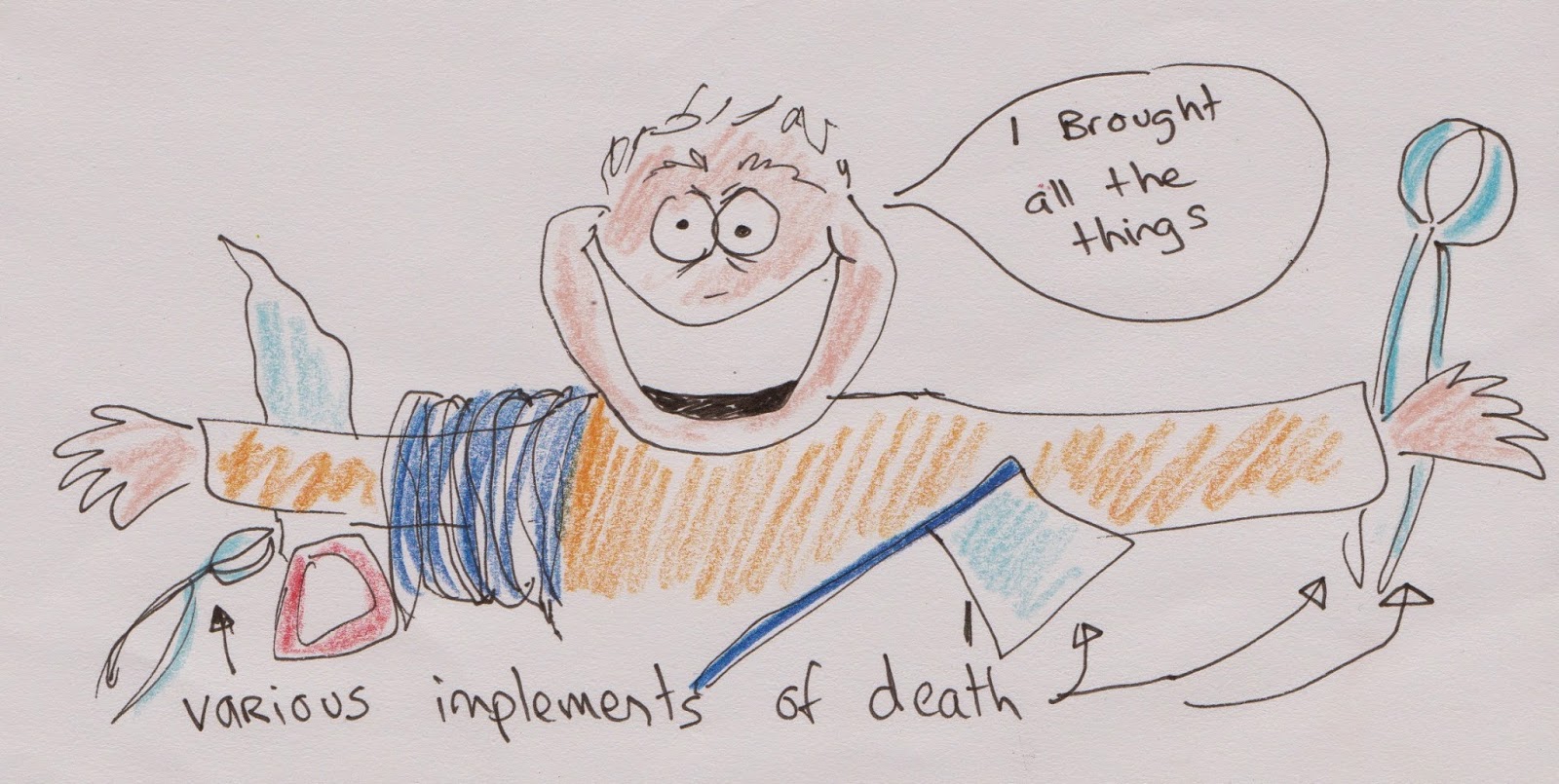 I was given a giant harmful scissor thing and informed it could chop my fingers off. 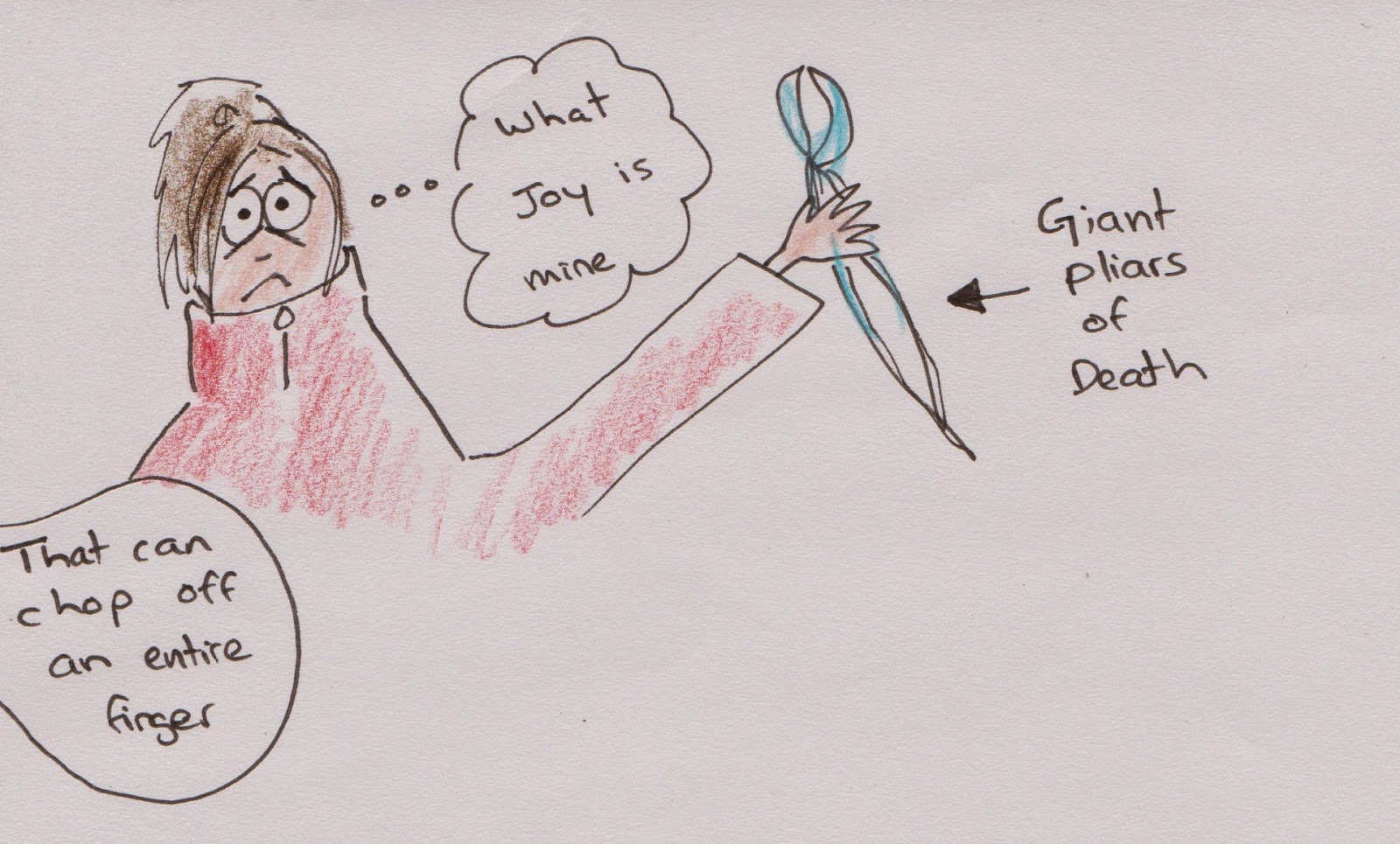 We set off on the path to the spot where we were going to build the bridge. A normal person would assume that you would build a bridge in a place where it is useful, a place where people generally go for a stroll and might want to cross it and check out the other side. For as long as I've lived, that has been my assumption. So you can imagine my surprise when the path to the bridge was about a mile of scrub, bog, brambles and death traps. 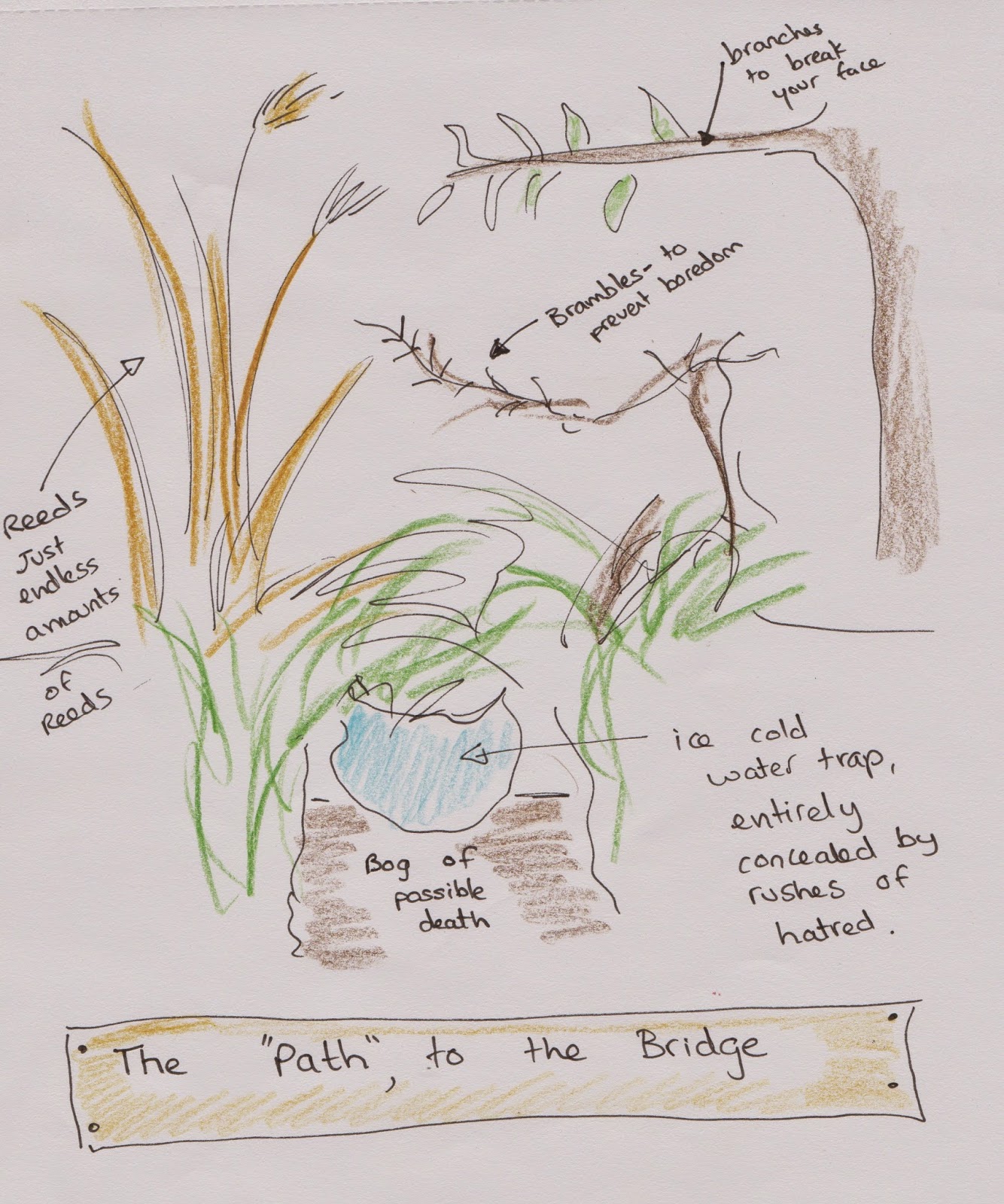 It wasn't a relentless trek, we took a few heart-warming pit stops to hear the history of our surroundings. This included things like a tree where rebels were hung by the English, back in the day. 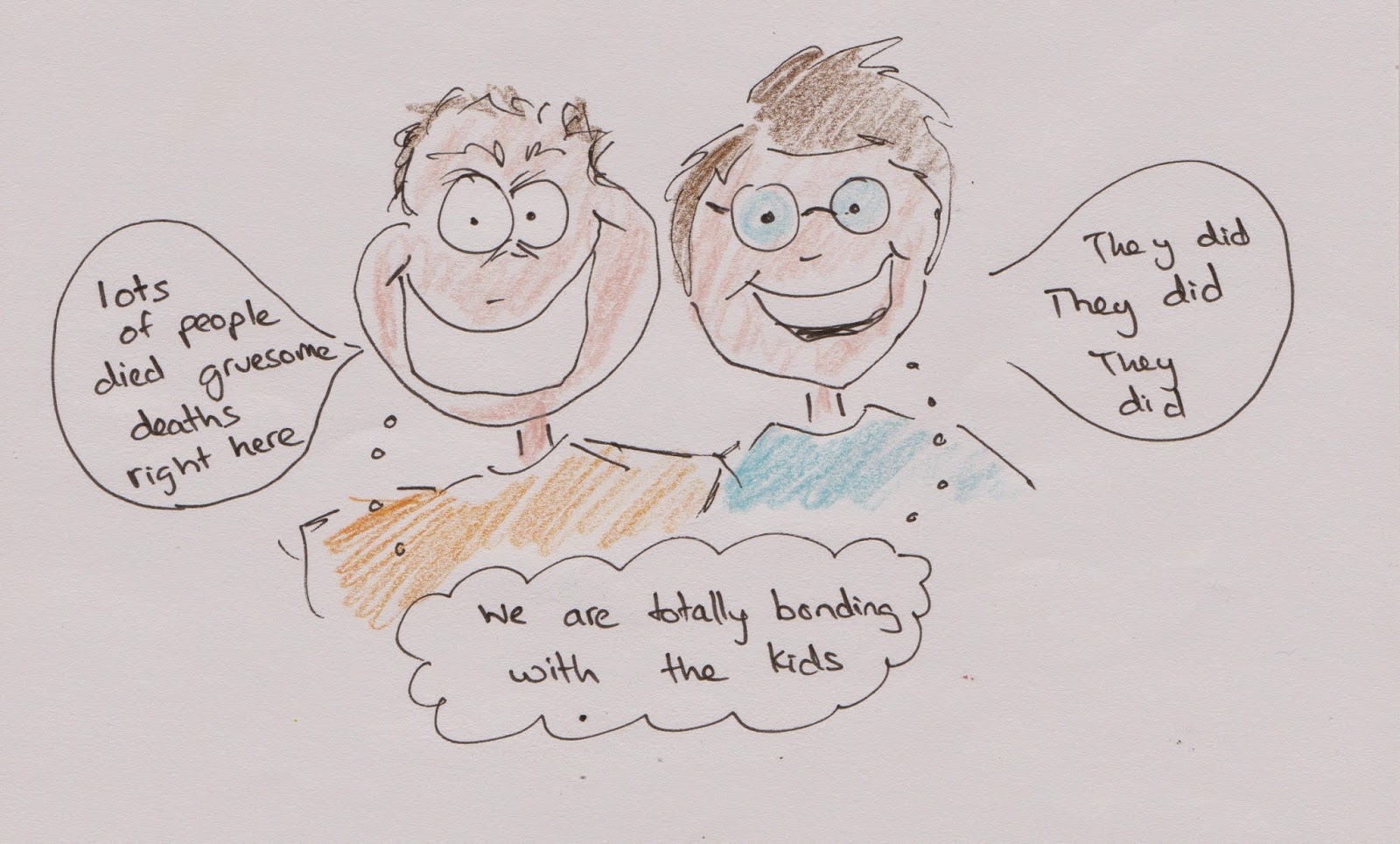 The journey continued with us traversing countless fences. This resulted in most of us crawling between the barbed wire like small defeated animals. 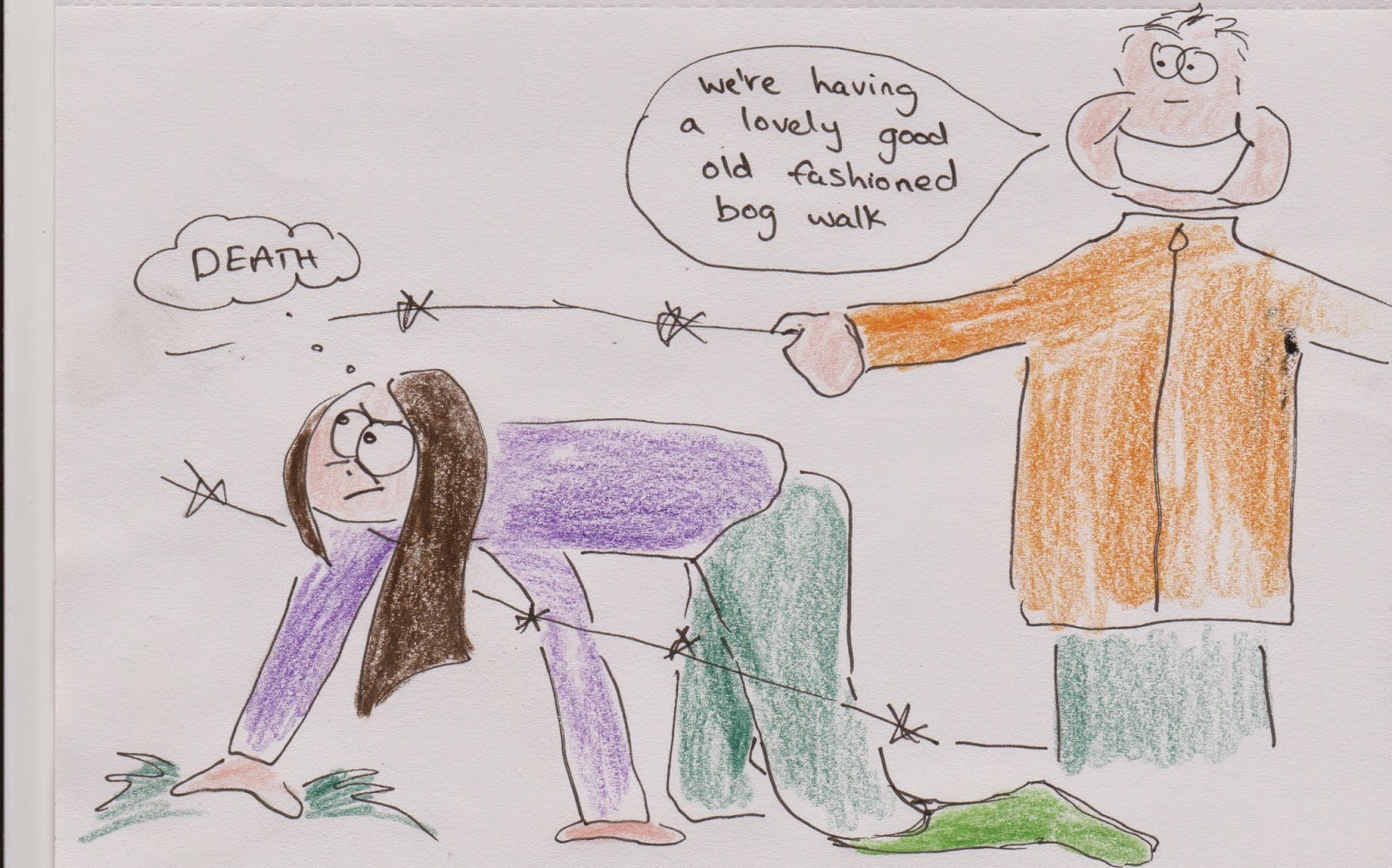 And an unspoken-fence-clearing competition between my two youngest siblings. 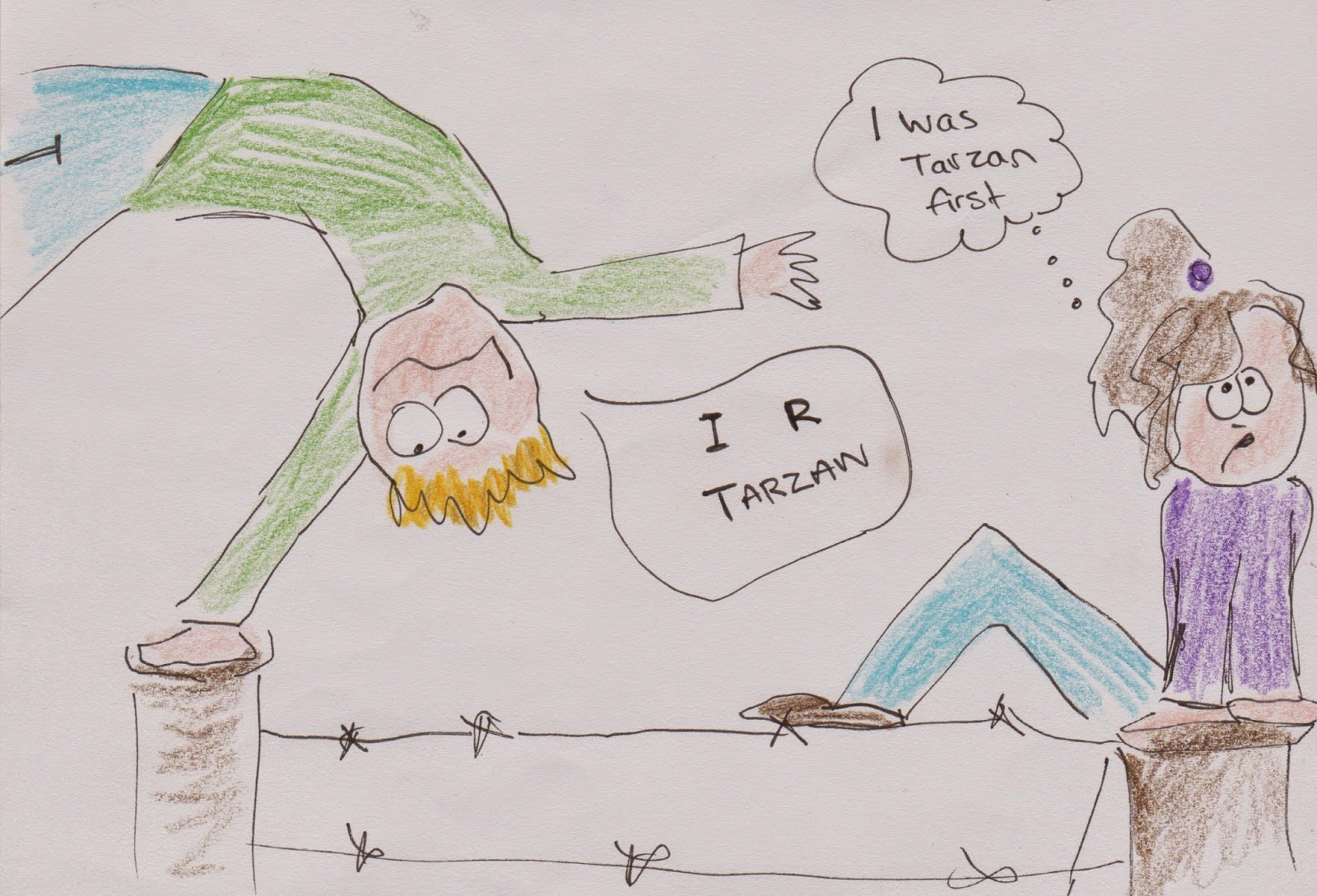 It wasn't long before some of us got left behind. We struggled on, as our parents skipped ahead with unsuppressed joy. 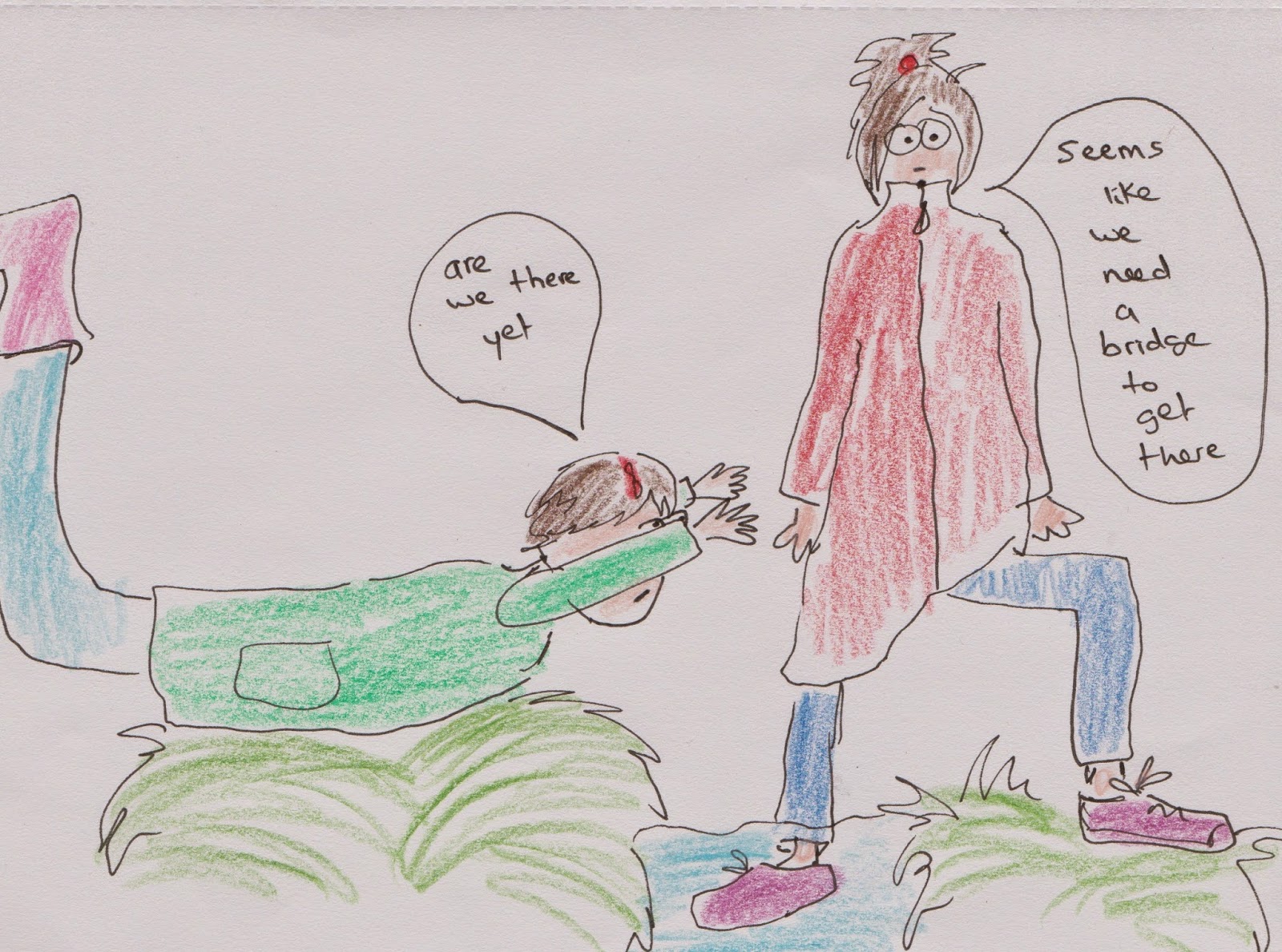 We did eventually catch-up. Not through any athletic prowess on our end, but because it soon became clear that the others were lost. 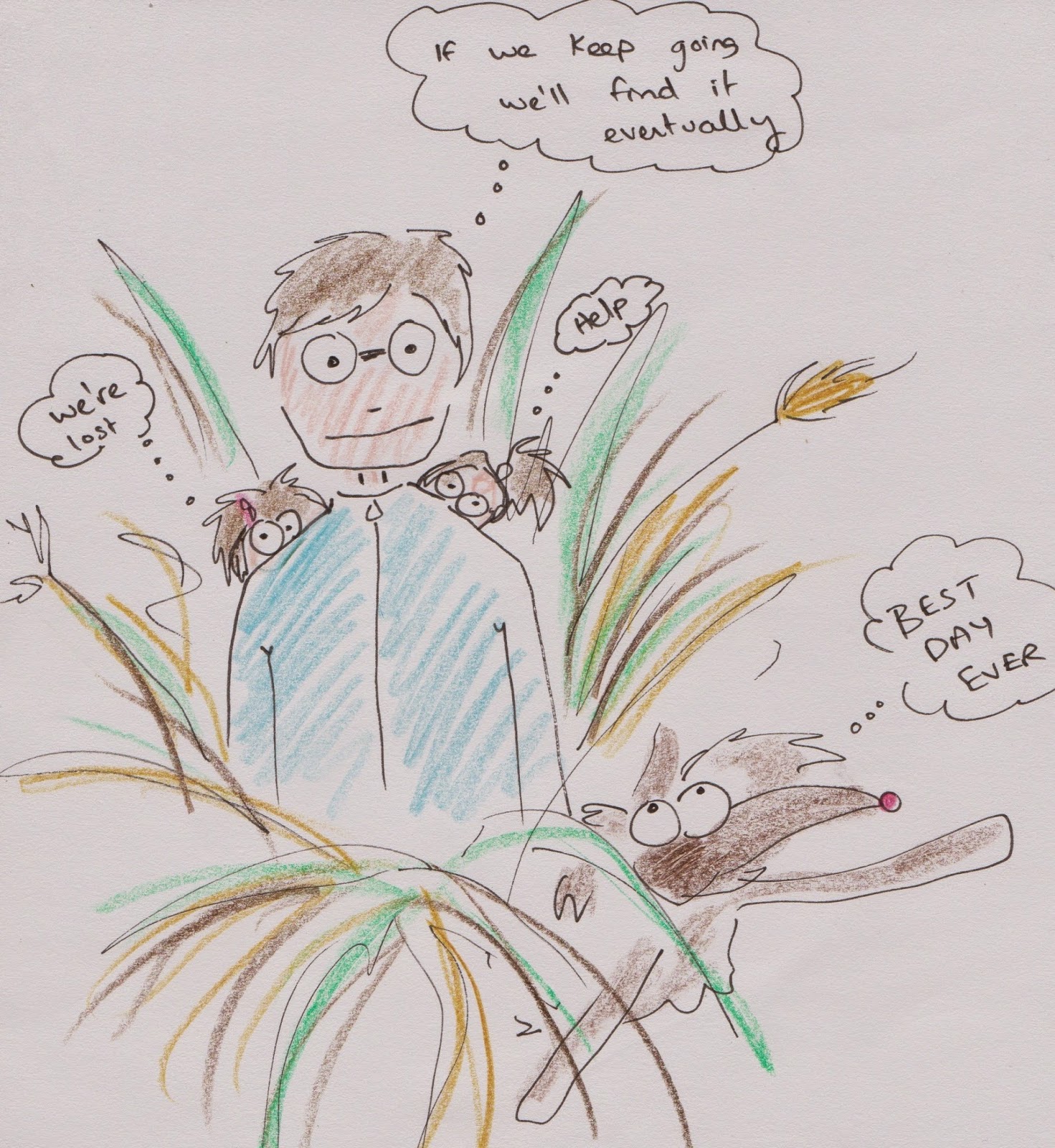 We trekked and trekked. We fell in puddles, we snagged our clothes, we got very grumpy and our parents were worse. They pretended like we weren't even lost. Everywhere we looked there were reeds and bog. Eventually my uncle decided we were there, even though it looked the exact same as everywhere else we had been. 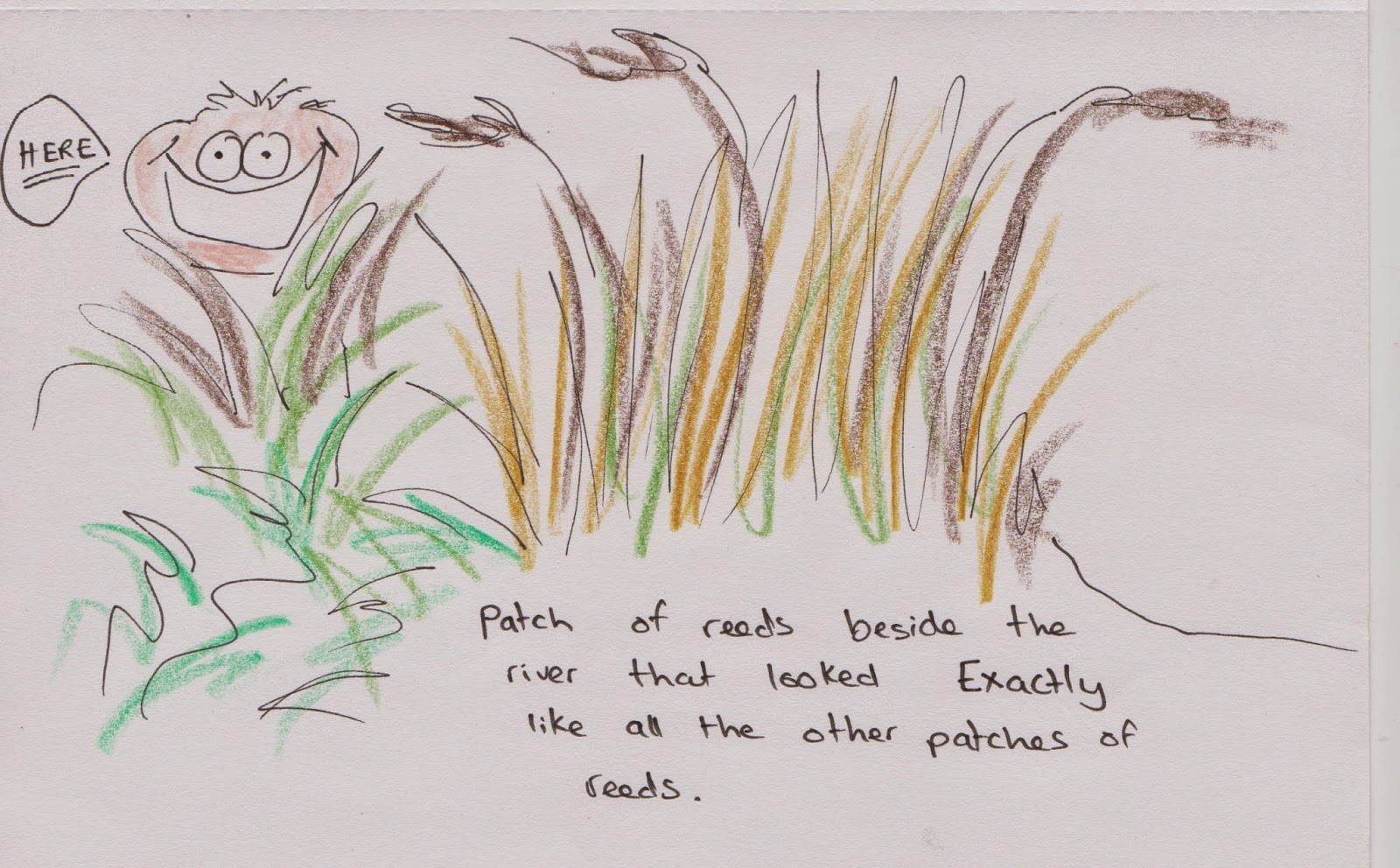 So we set about dispersing the tools. There were only enough tools for about four people, rendering the rest of us useless. We were going to take turns sawing down the trees. I began fantasising about the bridge we were going to build. My dream bridge was a bit unrealistic. 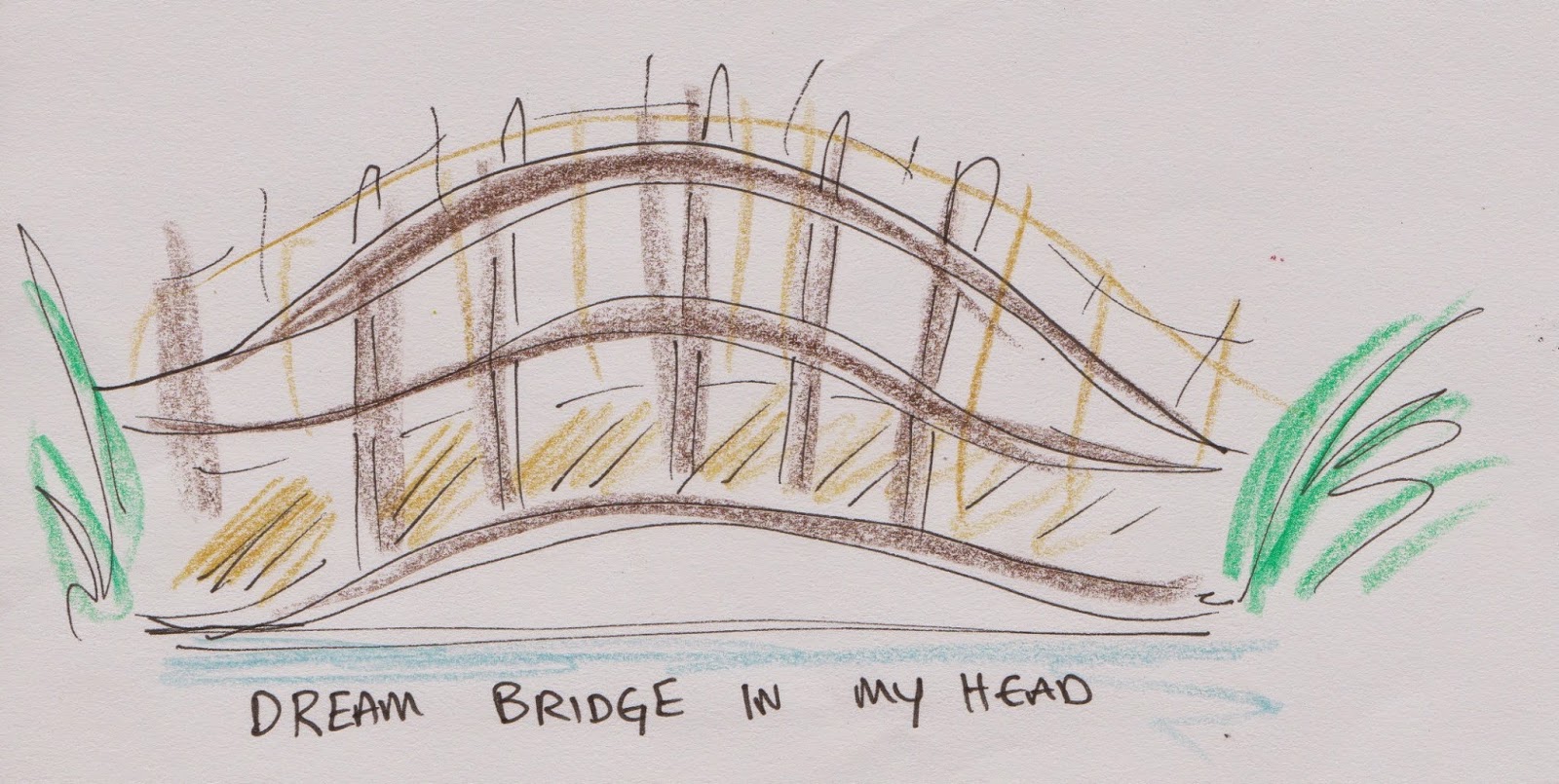 I knew this was highly unlikely. I imagined what the bridge would look like in the worst case scenario. 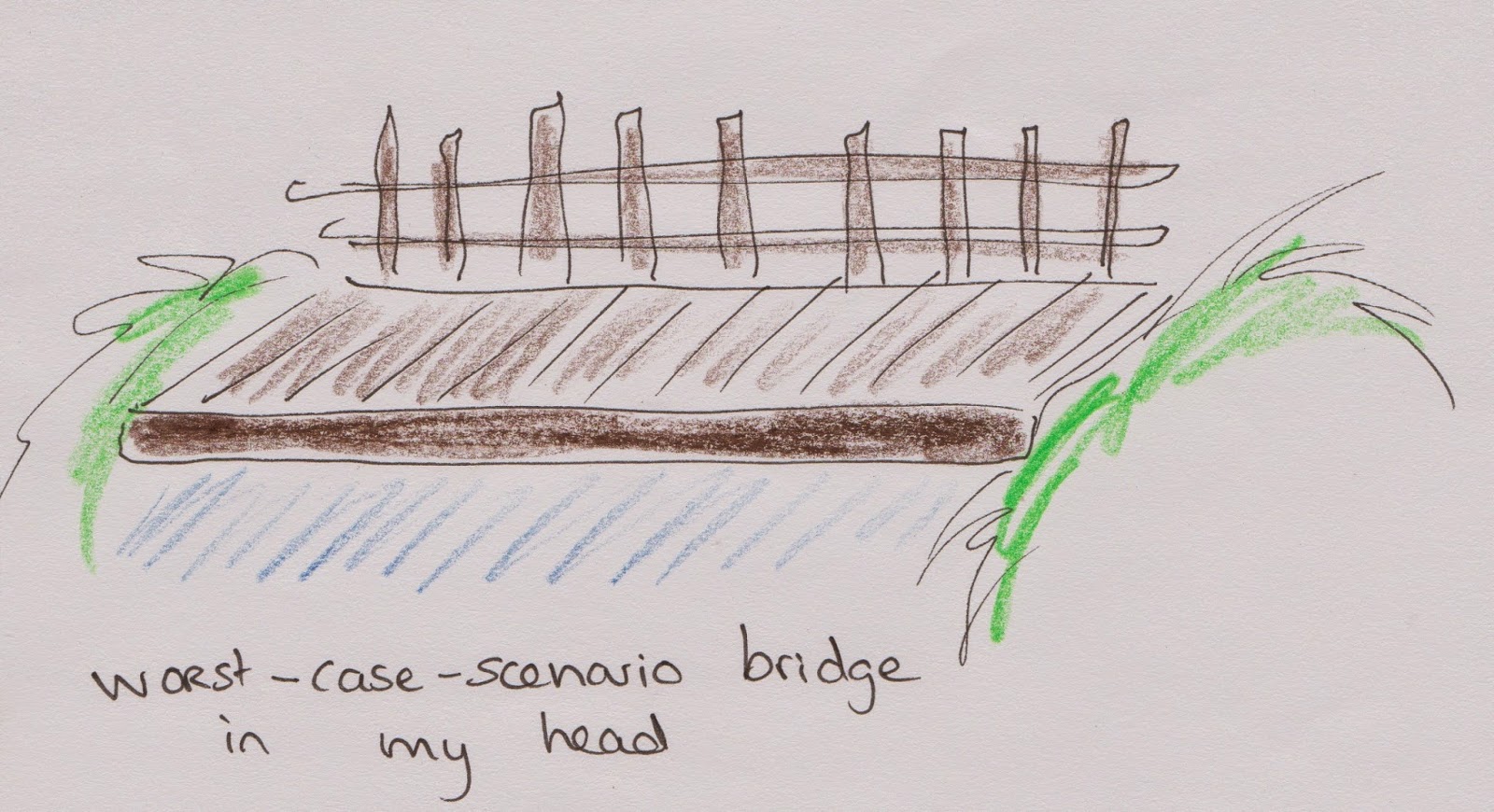 Once we started the process, and I saw some of the techniques being implemented, I realised even my worst case scenario bridge wasn't going to happen. 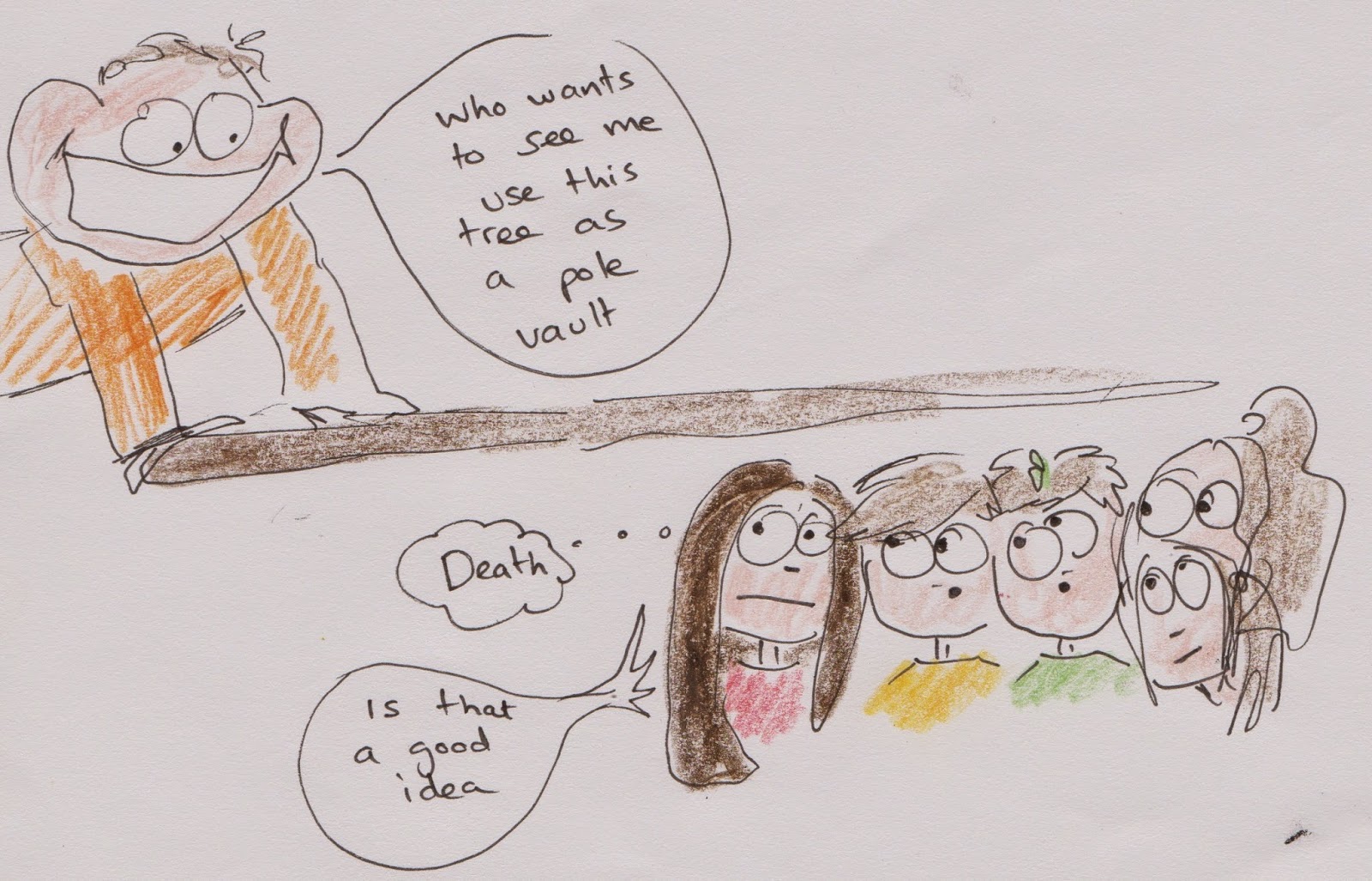 I watched as my brother became a cross between a violent murderer and a chipmunk. 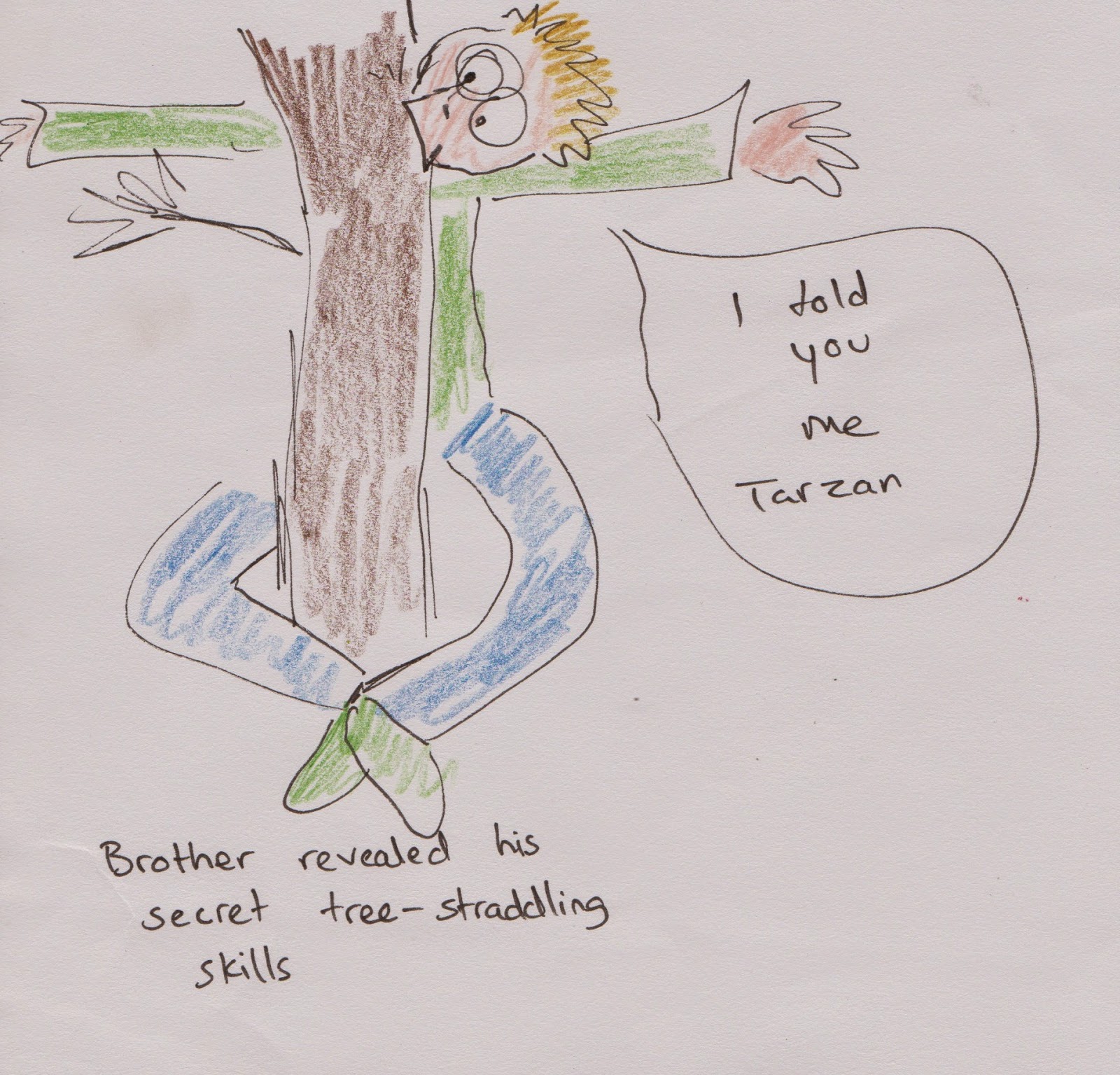 At one point my uncle sensed my wavering enthusiasm and offered me the saw. I reluctantly attempted to saw a bit of the tree. 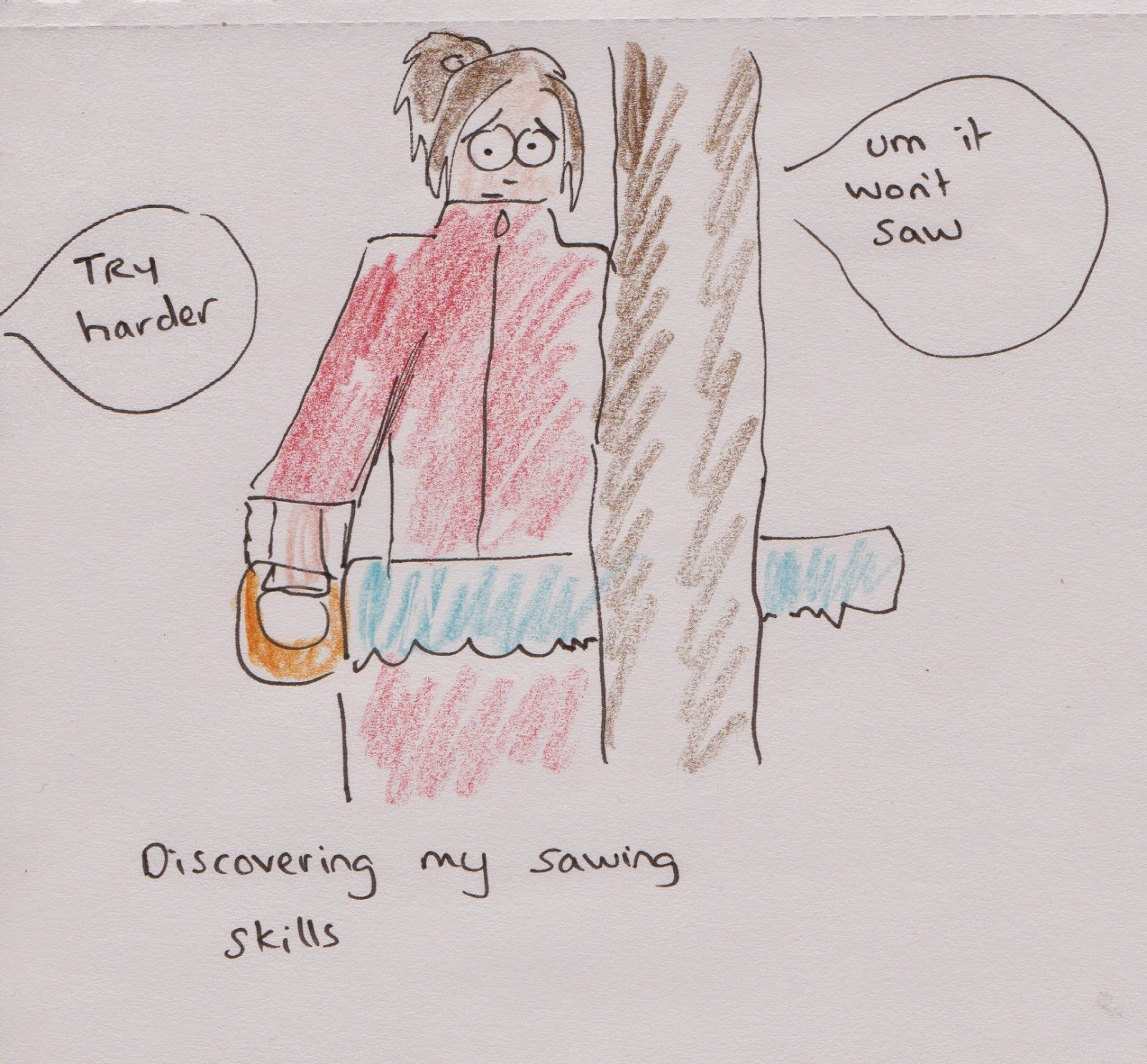 I was terrible. My Women's-yoga-pants-wearing cousin soon took the saw away from me. He was much more efficient. 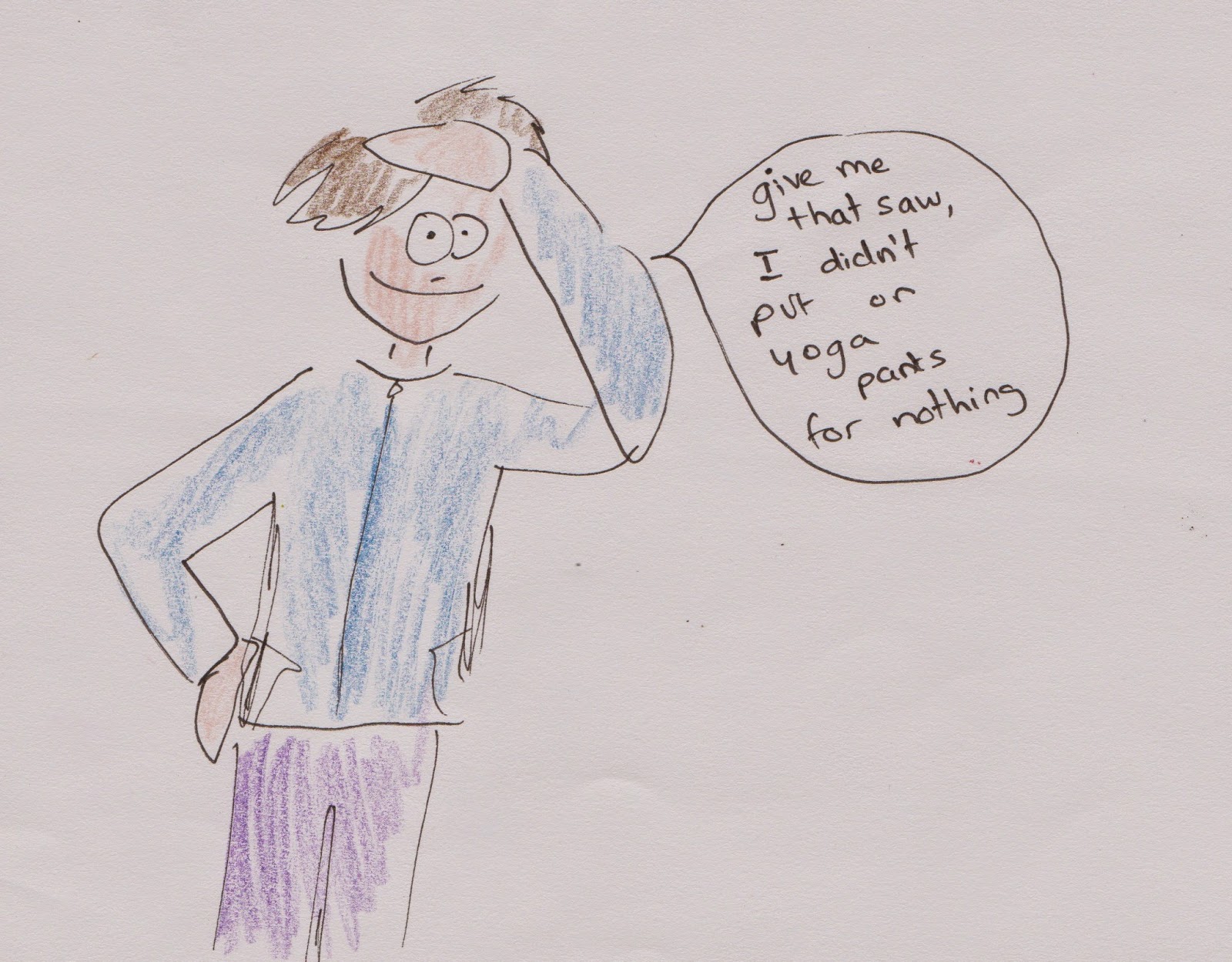 After the trees were knocked down, we pared them down and started moving them into position. My sister was not as good at straddling trees or wielding an axe as my brother, so she still had quite a bit to prove. She did so by picking up and moving an entire tree, all by herself. 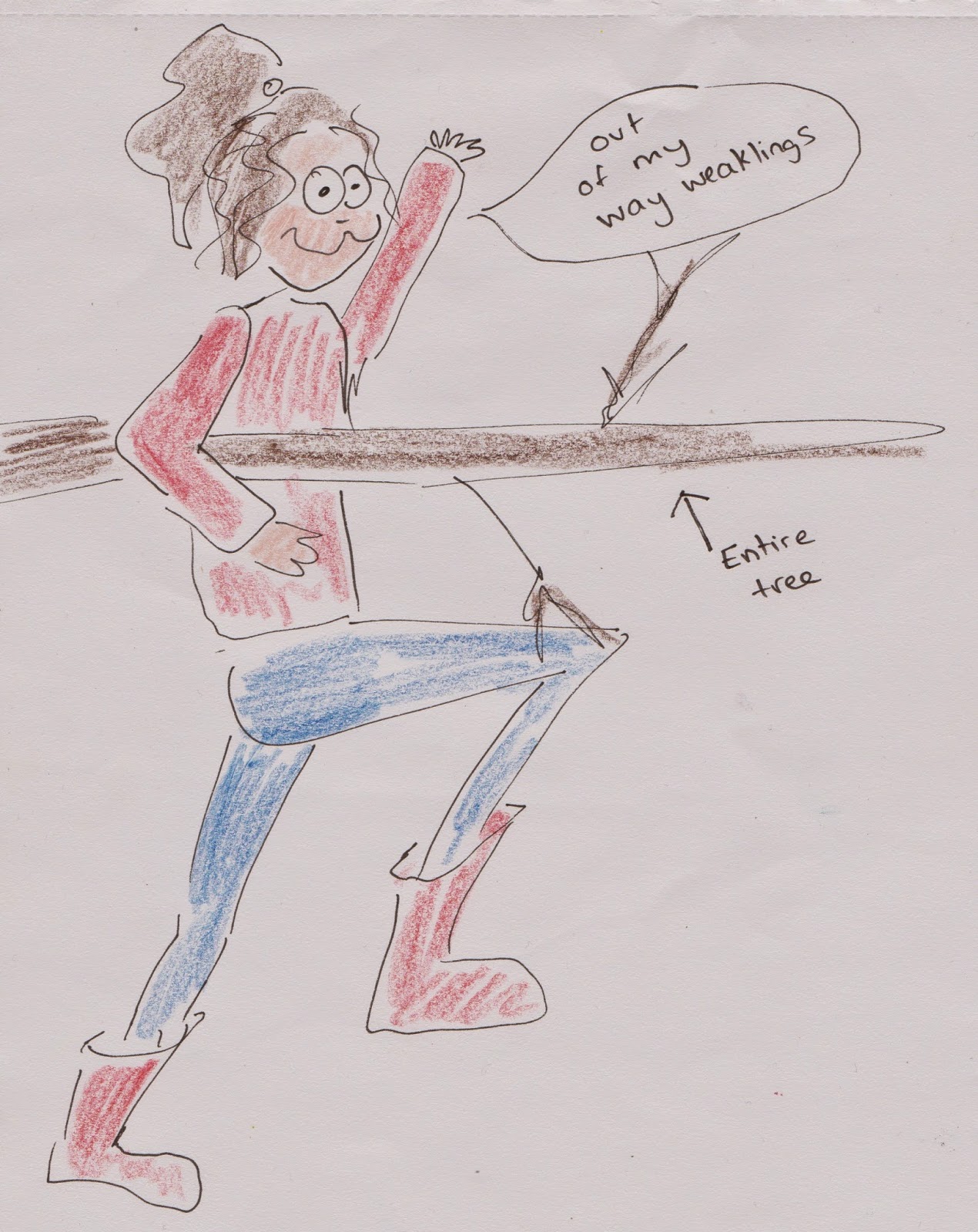 To put this in perspective, this is how we moved the other trees. 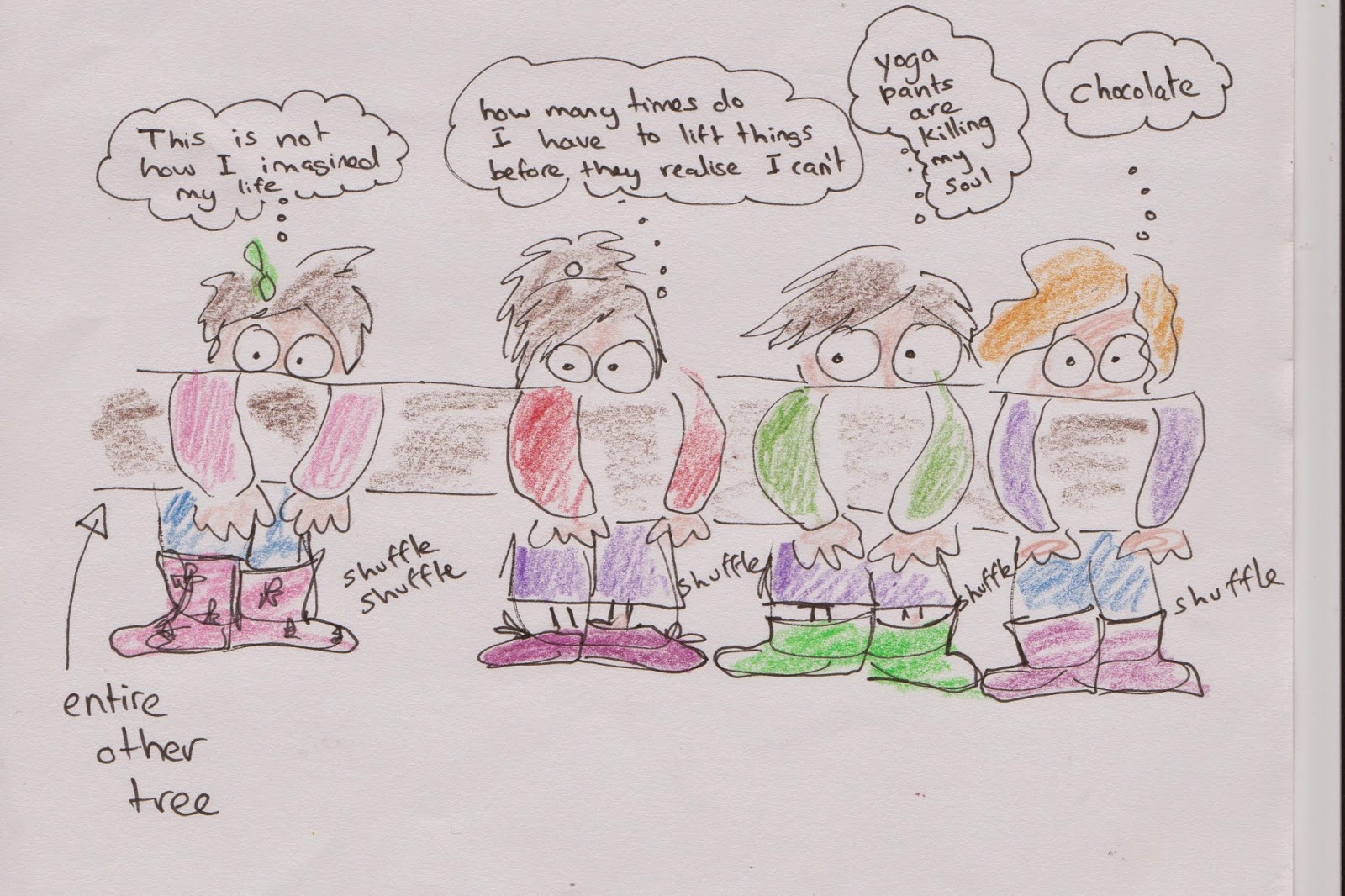 My Uncle then started the engineering of the bridge. This involved standing the tree up and allowing it to fall onto the other side. 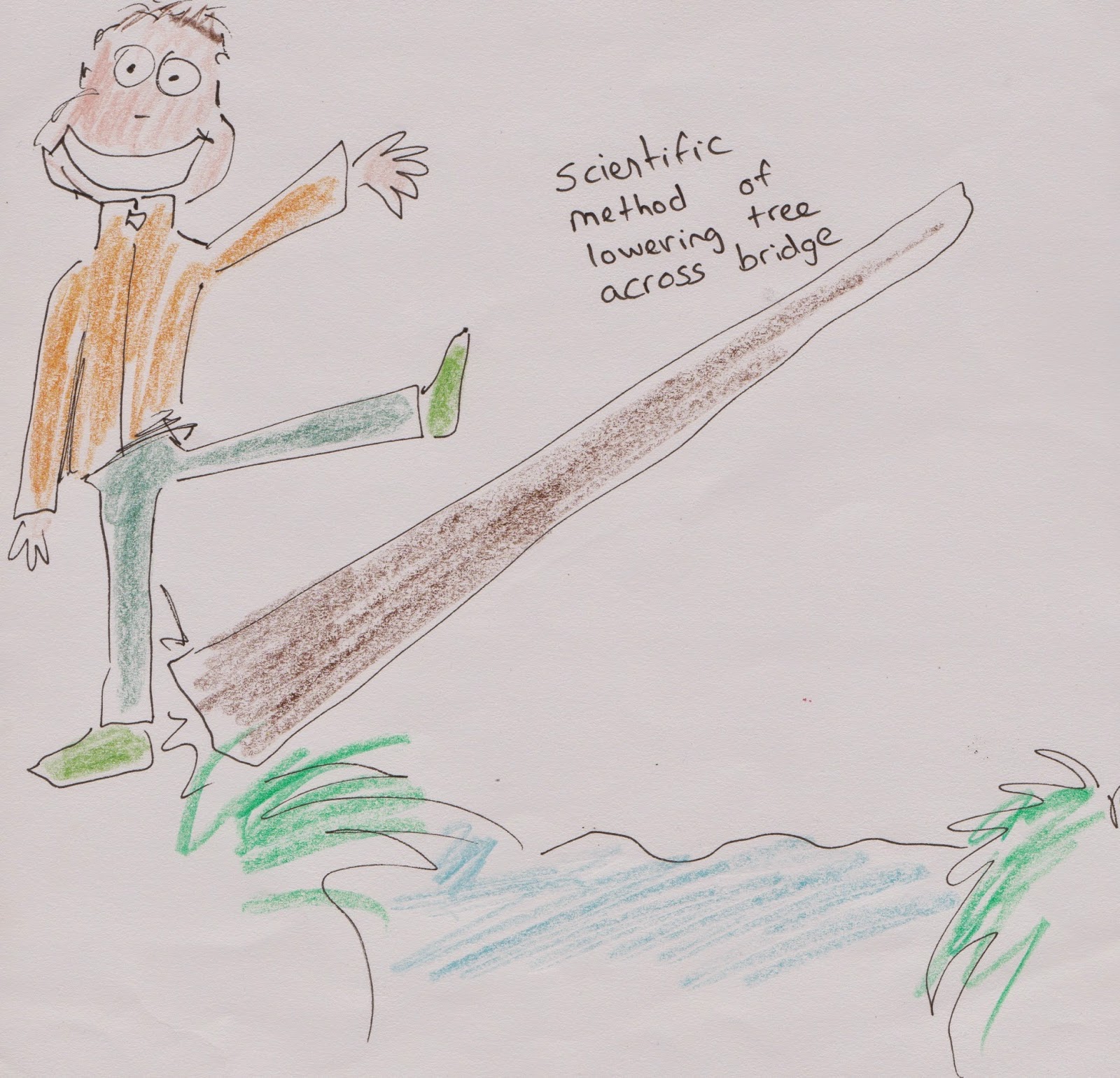 Once the bridge was engineered, we stepped back to admire our handy work. It was decided, by the sane amongst us, that we would only cross the bridge in an emergency, and if we were to cross it, we would most certainly be crawling. 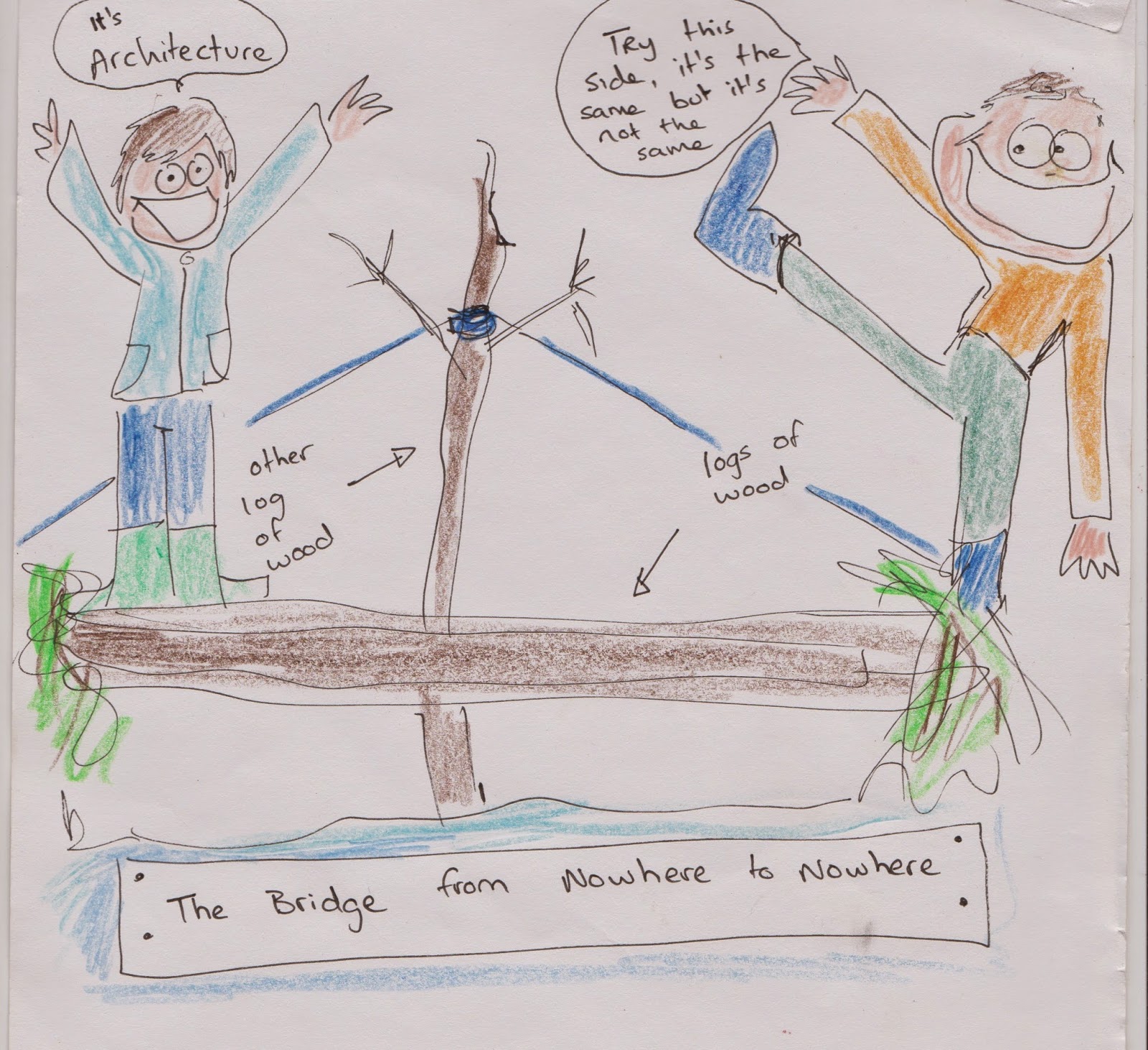 Posted by With all the Finesse of a Badger at 1:45 PM No comments: