The Time I was Abducted by Aliens

After finishing the obstacle course of death, (which you can read about by clicking here) I passed out. All I can remember is that I felt more cold and delirious than ever before. Even if I put all the cold bits of my life together, they would not have equalled the cold I felt. Everything went black and I dreamt about marrying the great big farmer I'd collapsed at the feet of. I know what happened next, I was lifted to safety, someone changed my clothes and dried me off. I was probably very heavy and dead-like during this entire process. I know that some of my co-workers saw my almost-dead body being dragged about by the Order of Malta and assumed I was being dramatic. I know all of this, but I do not remember it. What I do remember is when I woke up. 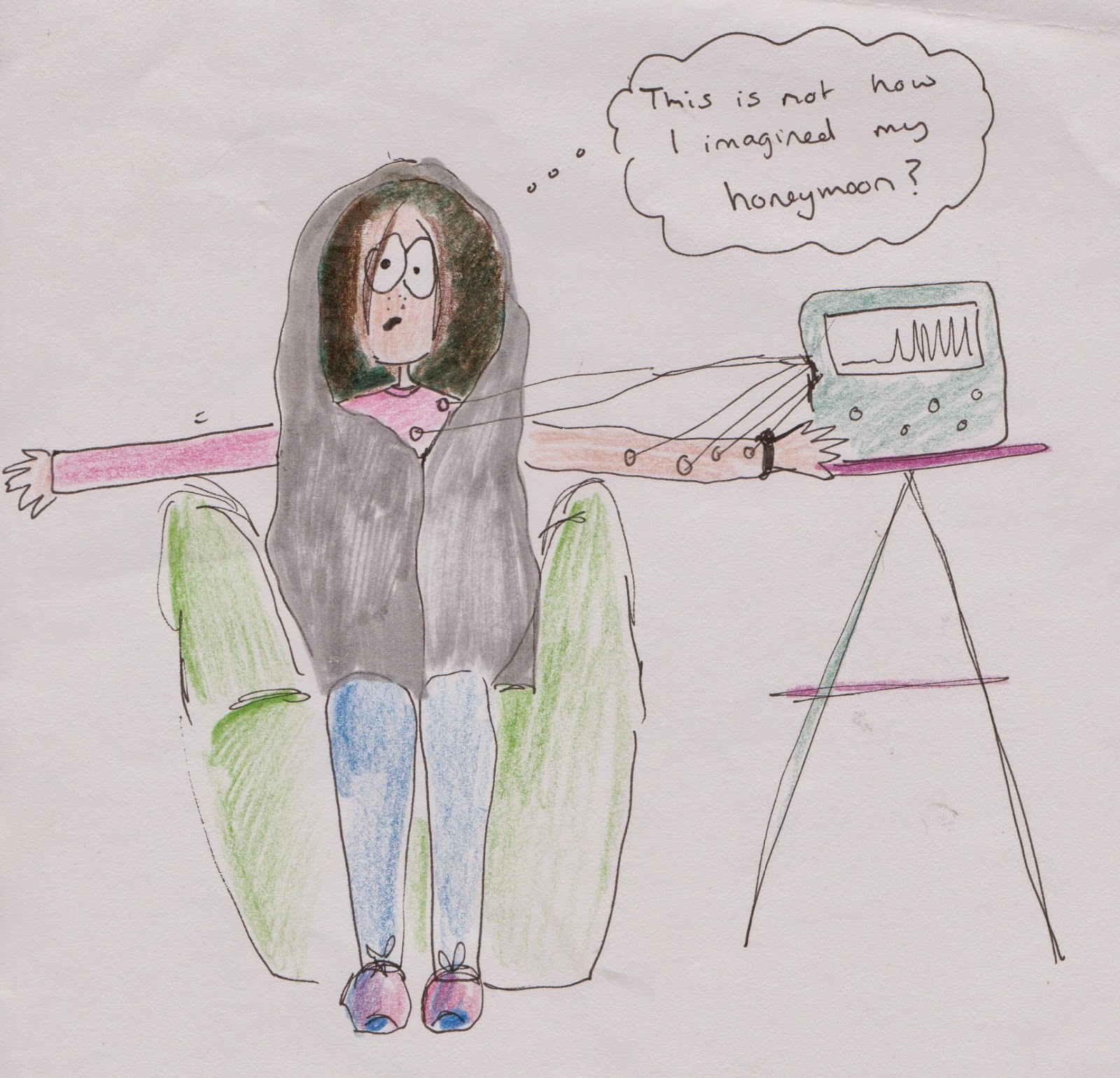 There were small suction things stuck to my arm, I was in a giant tinfoil blanket, my skin was a bit blue and there was a machine beeping. I made some noises. I was trying to ask where I was. 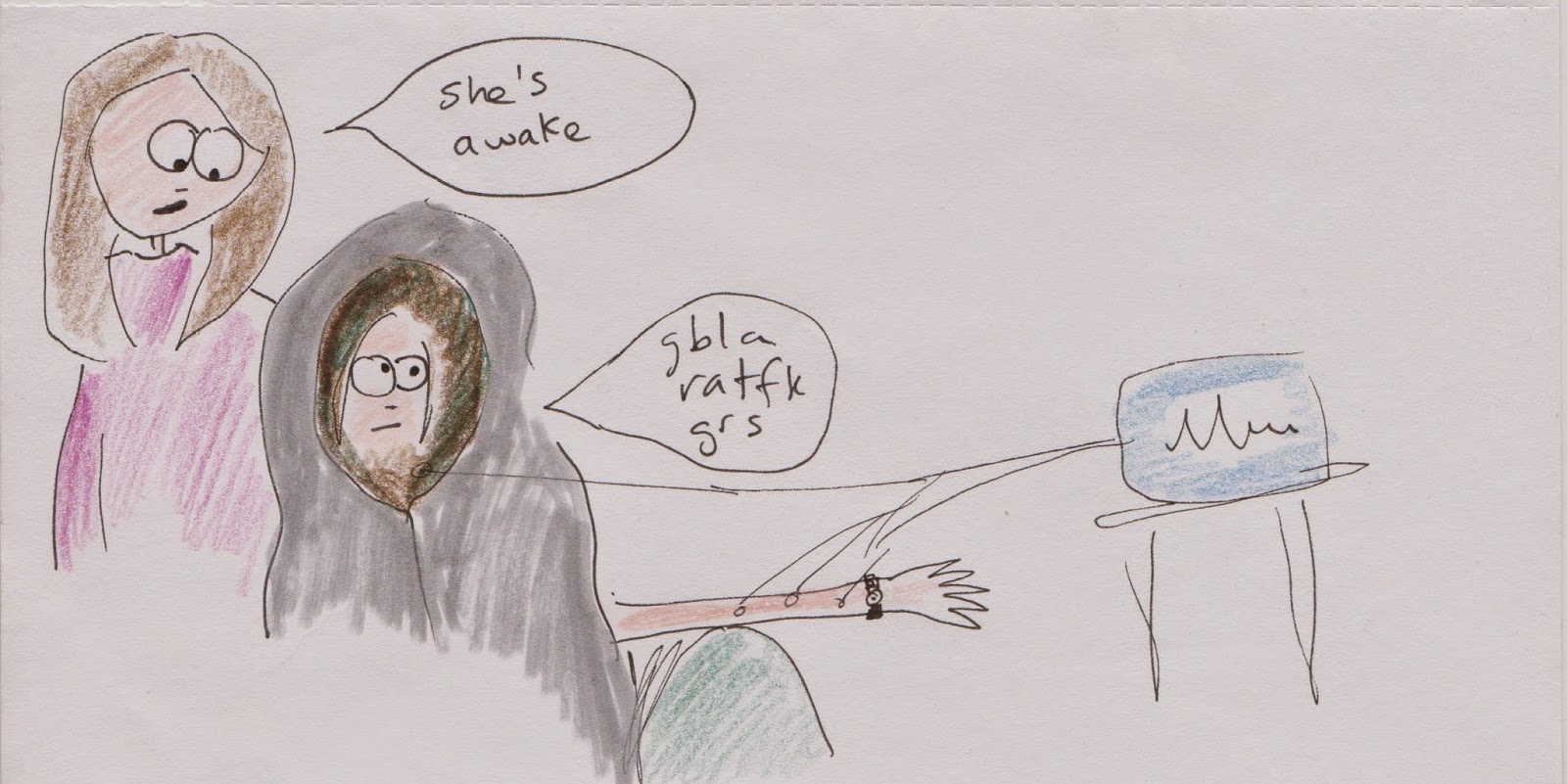 Then I noticed all the people in the room. They were more scary than the unexplained machine. They all had horror movie smiles on. I knew then that they assumed I was going to die or were relieved that I had somehow not died. 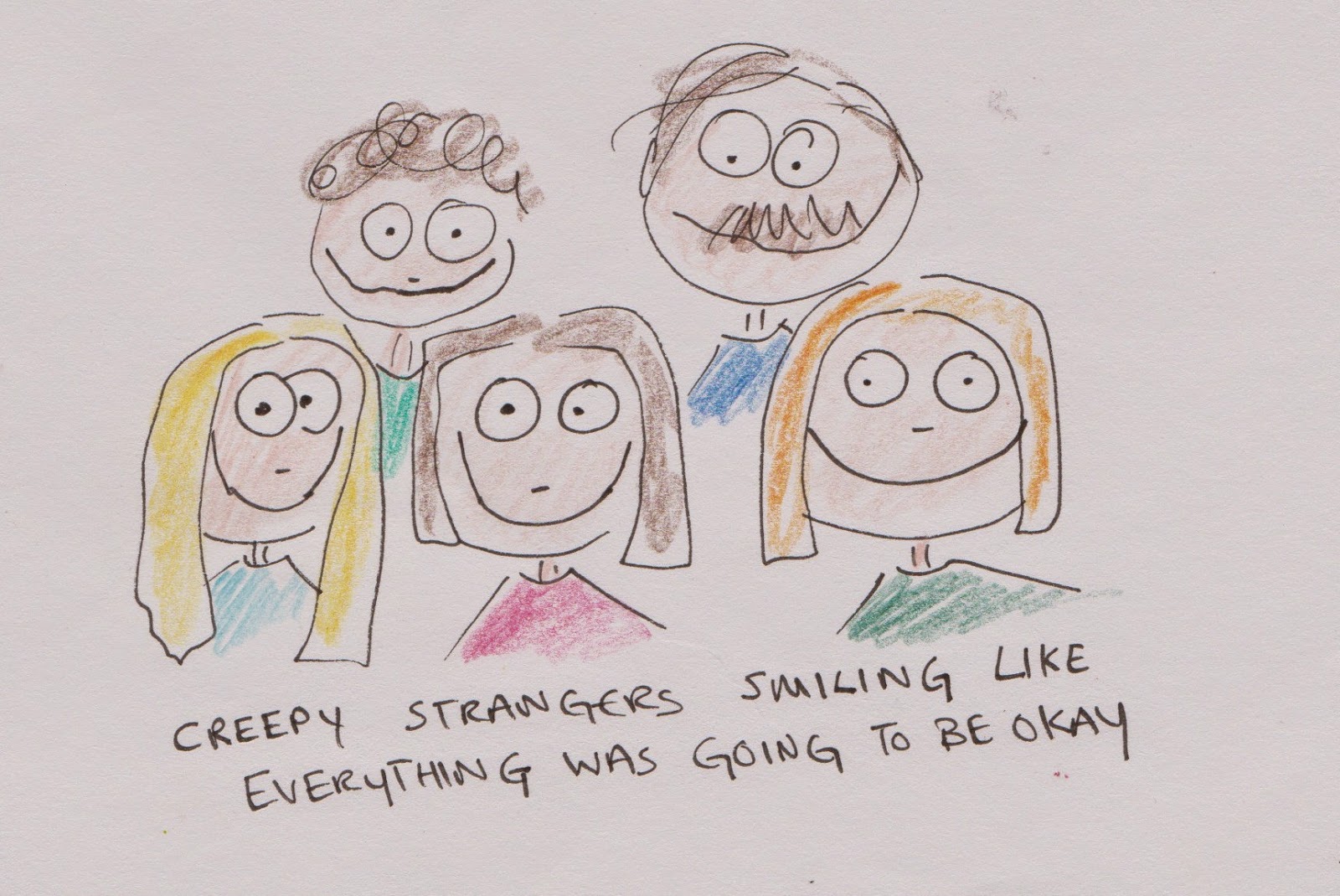 Then, I noticed my surroundings. I was sitting in a barn. A barn with a great roaring fire, a bunch of fake smiling people and a dead badger skin on the wall. There was also a very detailed map for the farm with pictures of all the things you could kill, if you were that way inclined. 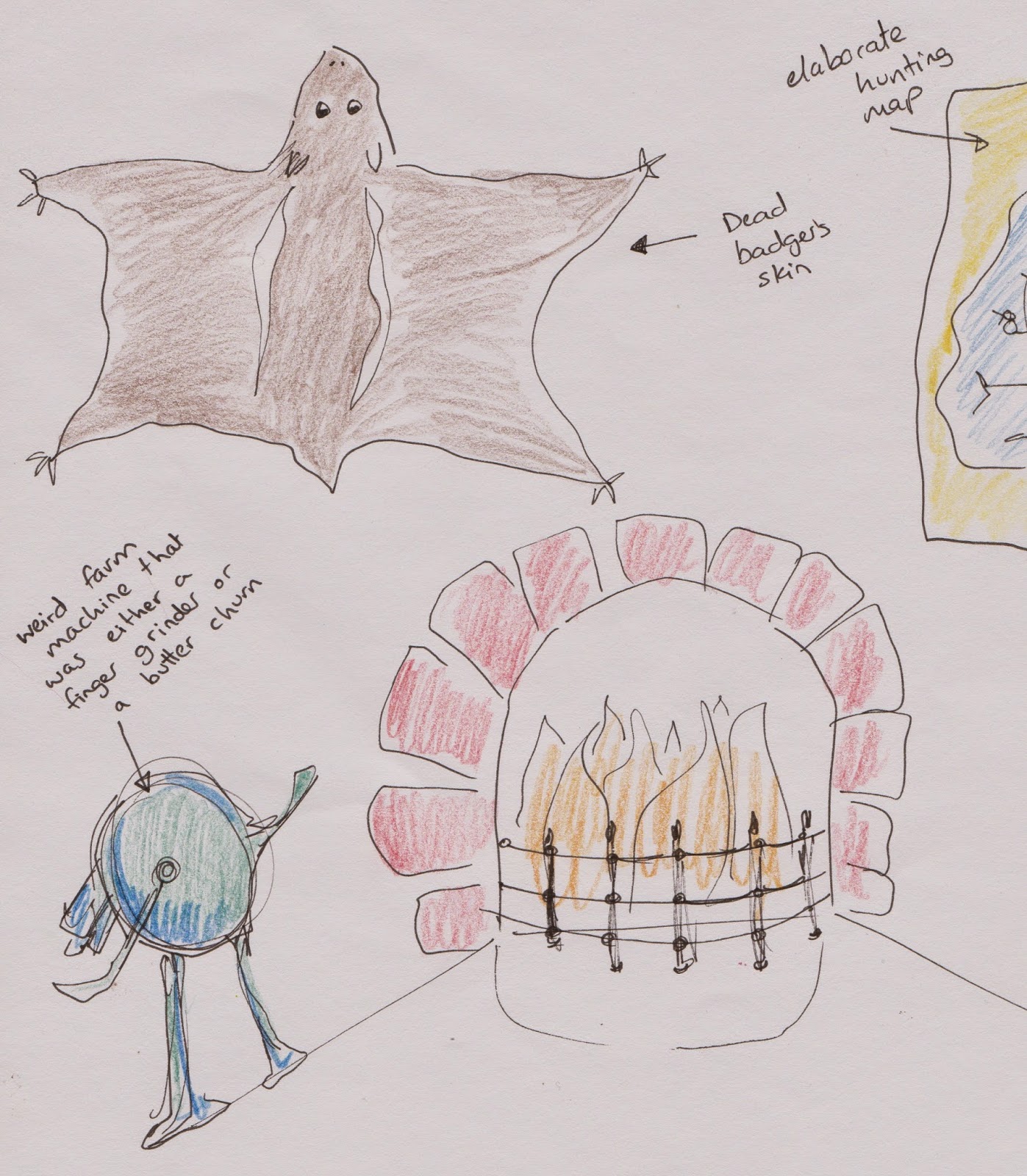 At the time, I had no idea where I was or why. I'd forgotten everything and so I assumed the most logical thing. 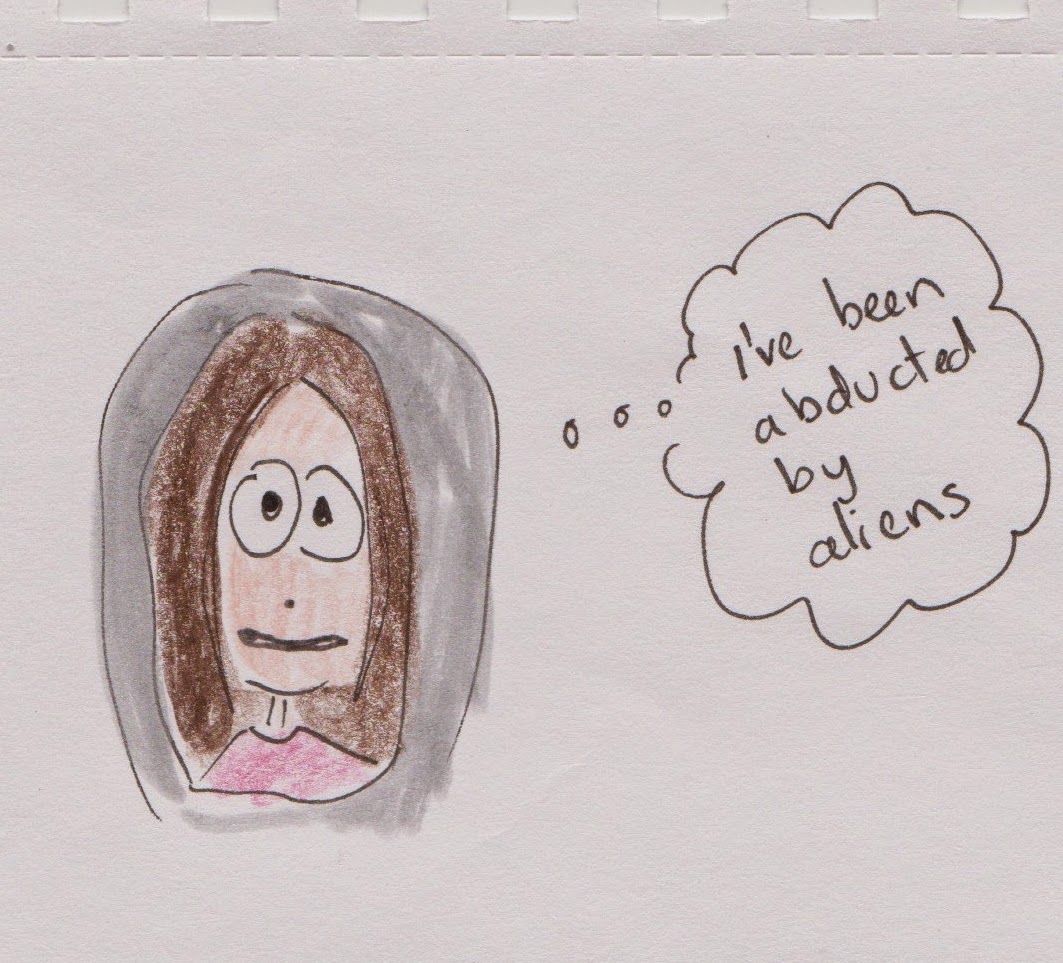 They had removed my clothes. I did not know what clothes I had been wearing, but I knew I would never leave the house in a giant tin foil blanket. 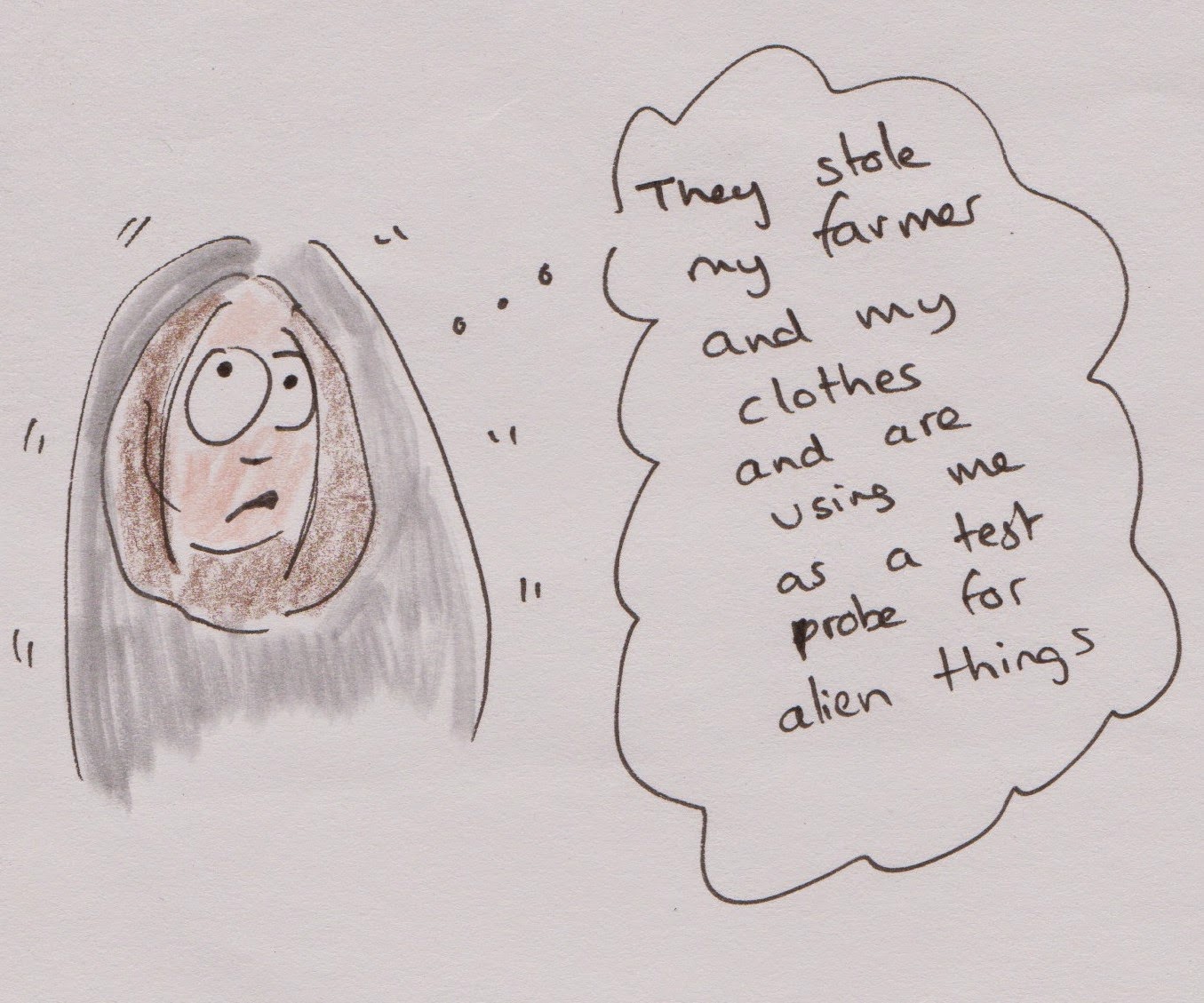 I do not believe in things. I don't even believe in myself 50% of the time, so this was not ideal. I made noises that I hoped would bring help. 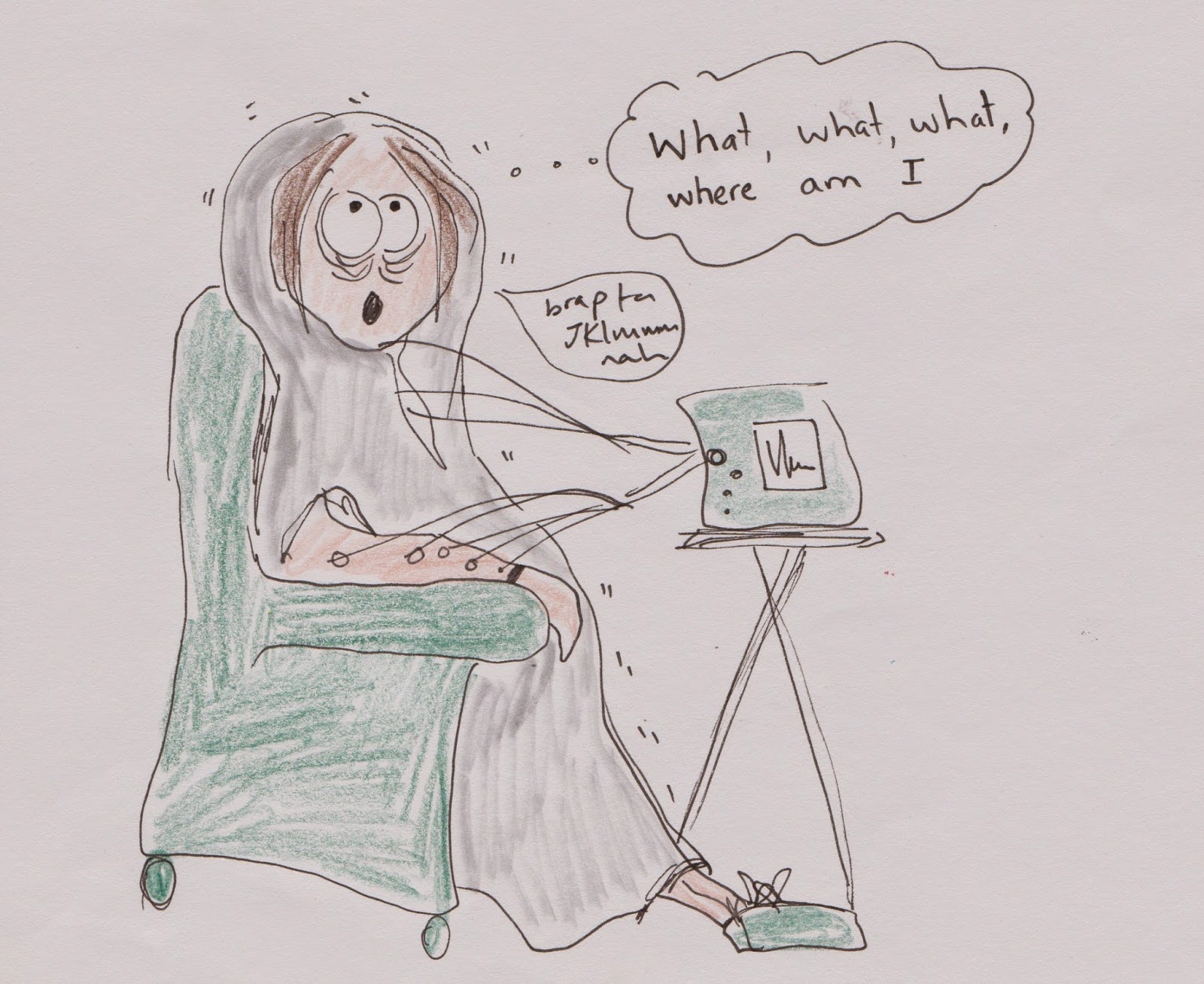 Help did not come. Instead a man with an incredibly rich moustache asked me impossible questions. I tried to answer, but weird noises were coming from my mouth and I couldn't move properly. I was trying, but my body was a lump. It was not doing anything. 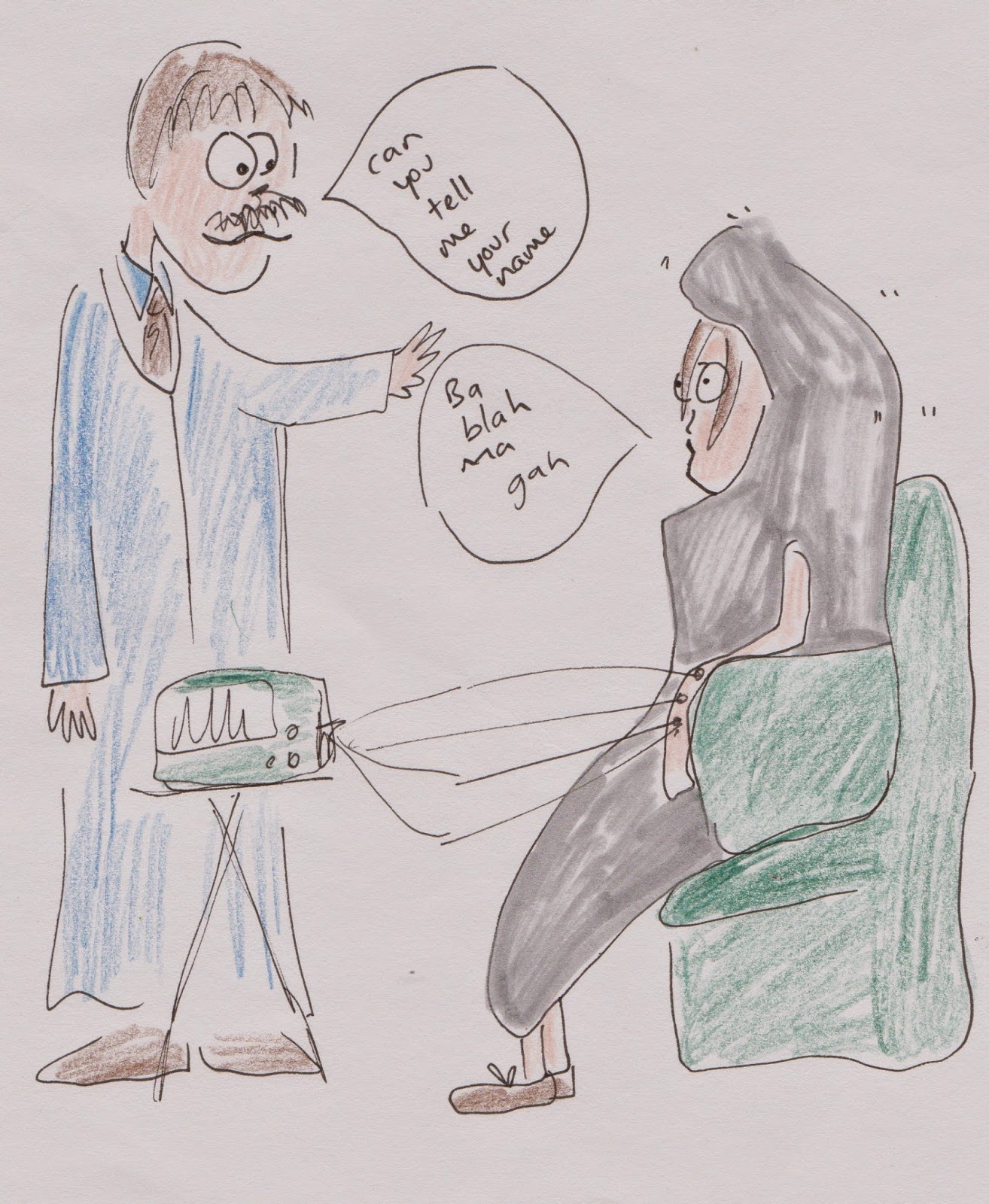 The annoying happy people offered me tea. I was beginning to remember flashes of the race, so I knew they were not aliens and accepted. 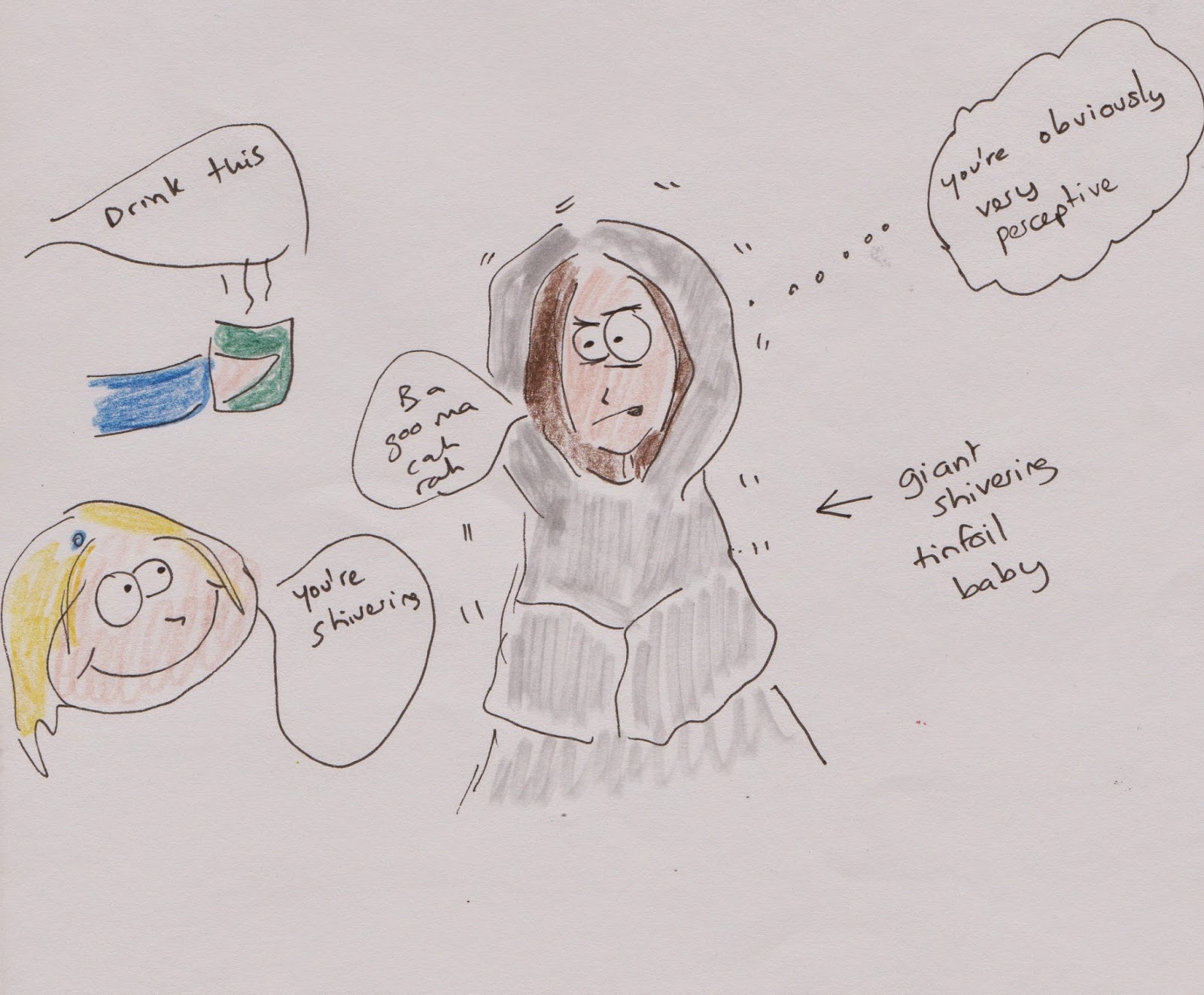 I did this by making odd noises, so I am not sure how they knew I consented. For all they knew I was not a fan of tea or highly allergic to caffeinated beverages. It was wild. They fed me tea with absolutely no concern for the consequences. They were very excited because I was shivering. It felt horrible, like my top teeth were trying to murder my bottom teeth, but it was apparently very impressive. Then something happened. Moustache man asked for my name again and this time a real word came out. 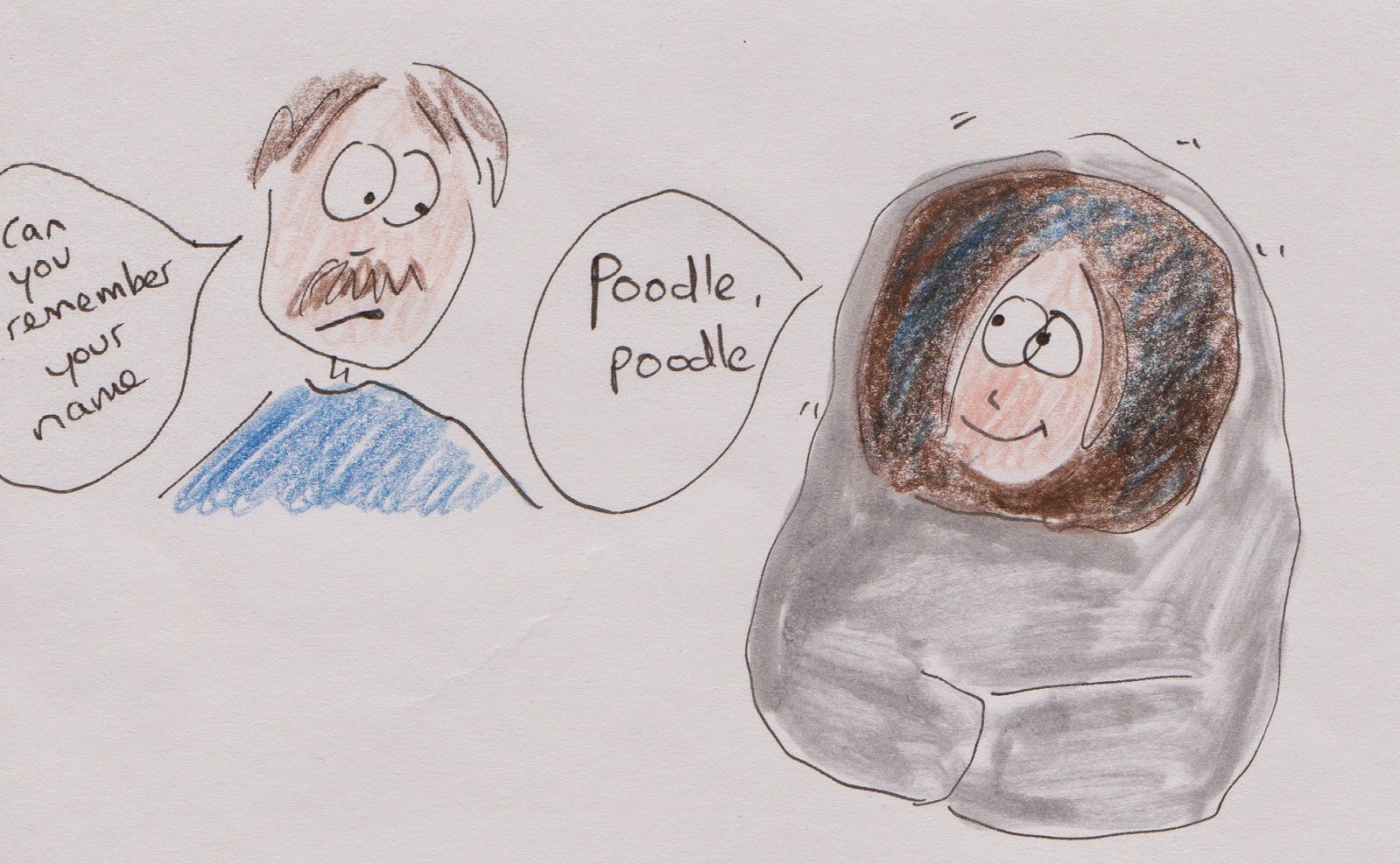 It was like being a baby. I had no idea what I was saying, but it was very exciting to say it because some part of me knew it was a real word that had something to do with my life before the tin foil blanket.

The people were confused.

I kept saying it because it was the only thing I seemed to be able to do. 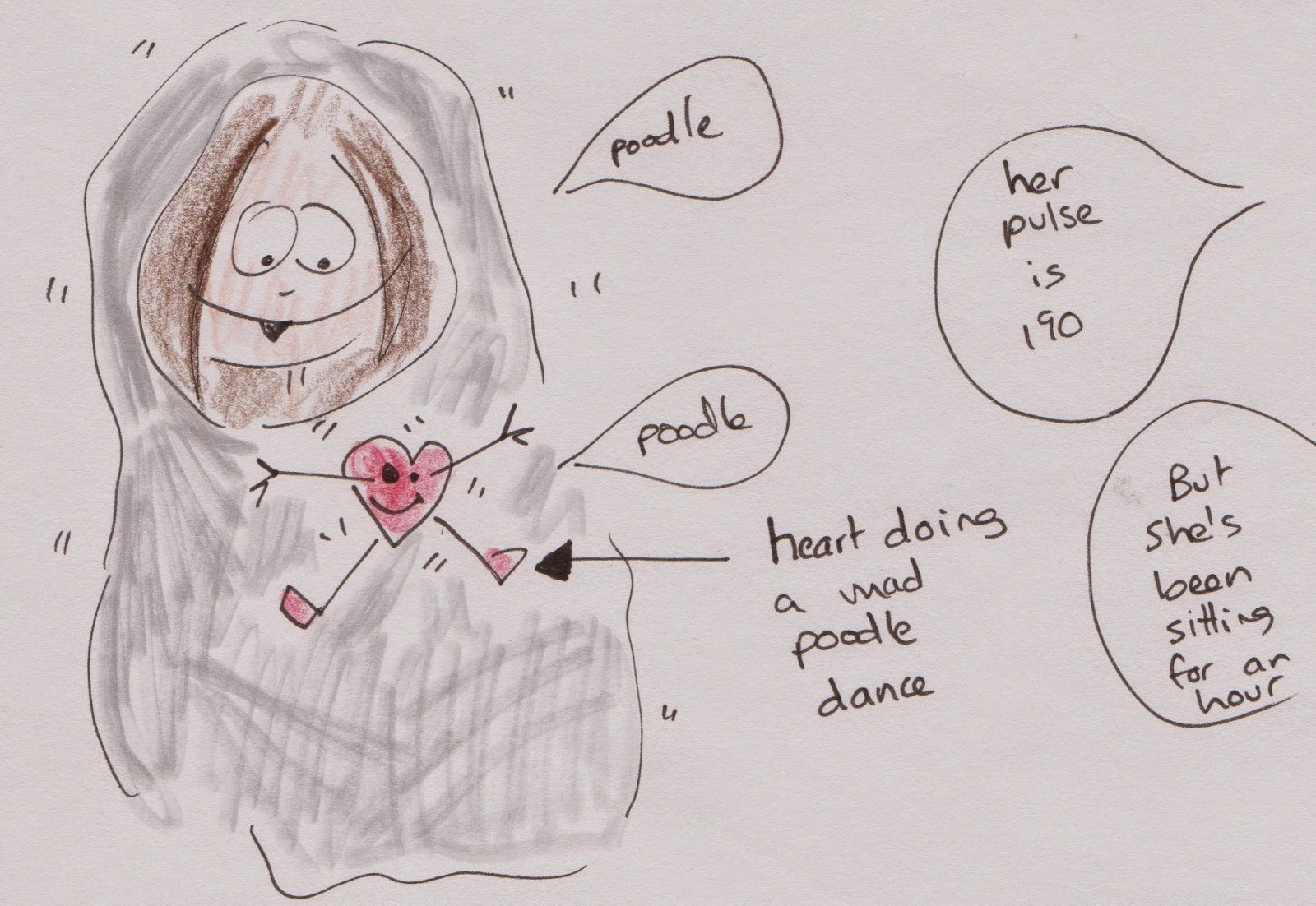 I remember the moustache man telling me I had severe hypothermia, but I wasn't really listening. I was too excited about my word. 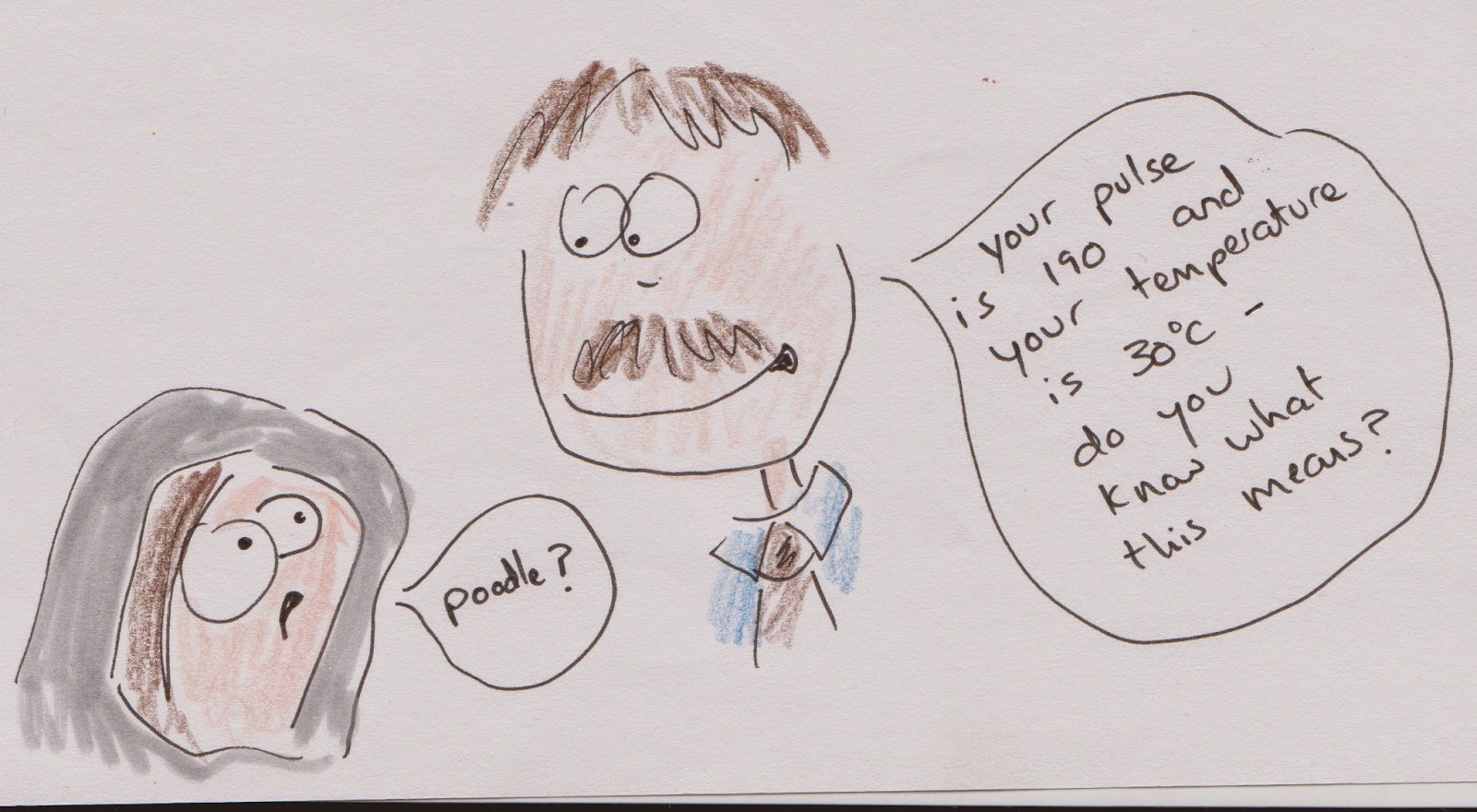 I spent a lot of time with the smiley people. I shivered lots, which is apparently how your body warms you up. My heart calmed down eventually - it had been through a lot - from obstacles of death, to a fantasy farmer marriage and then overcoming the shock of possible aliens. After sometime I started remembering things. I remembered that poodle was not my name and was actually the logo of the company I was running with. Then I remembered my name.

Every new thing I remembered made the smiley people very happy. 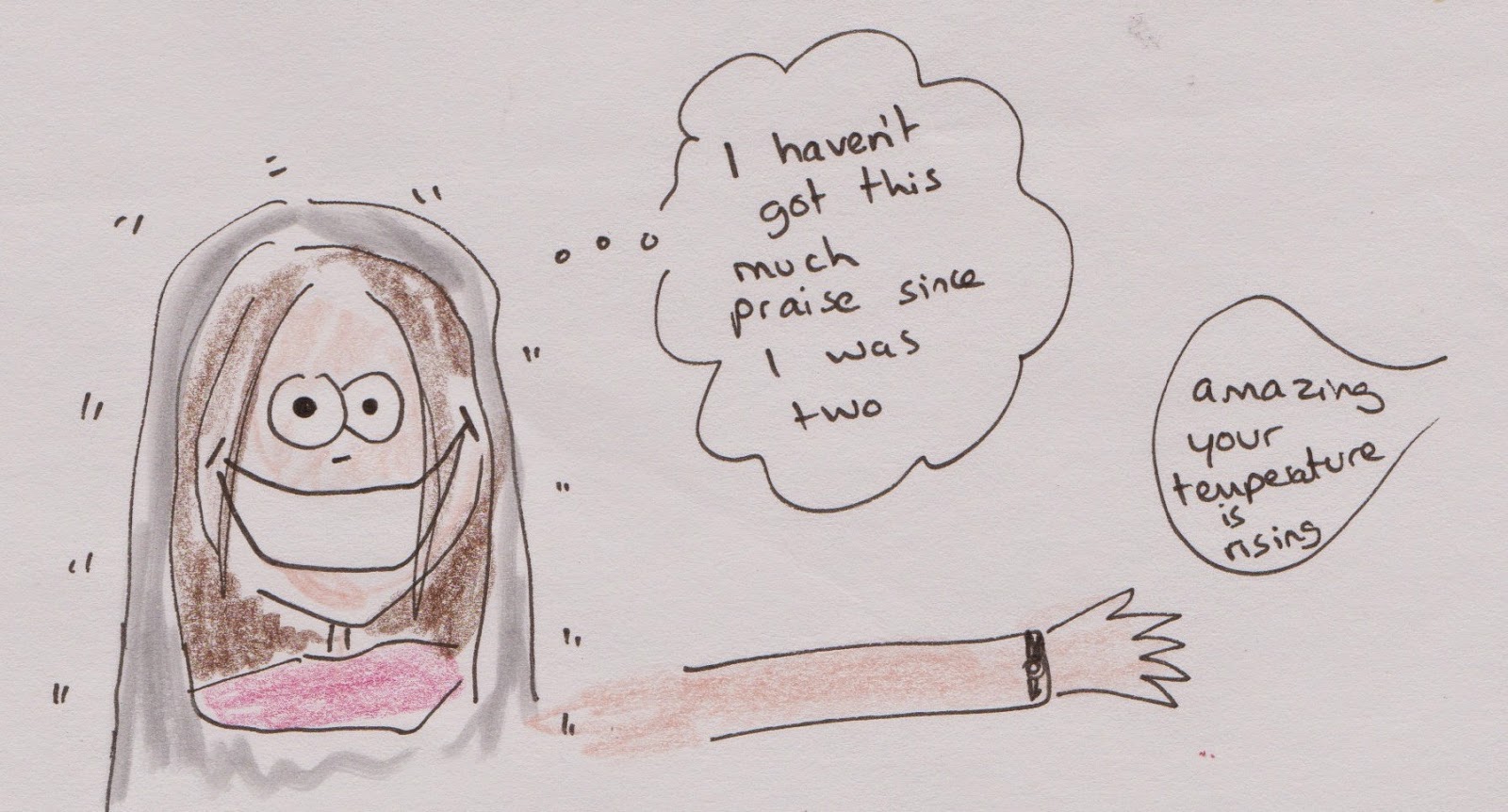 Then I acquired motor skills. It was tough, but I more or less drank from the cup independently without spilling too much.

After I'd spent enough time shivering they released me. I was still mildly concerned that the experience was a bit surreal. 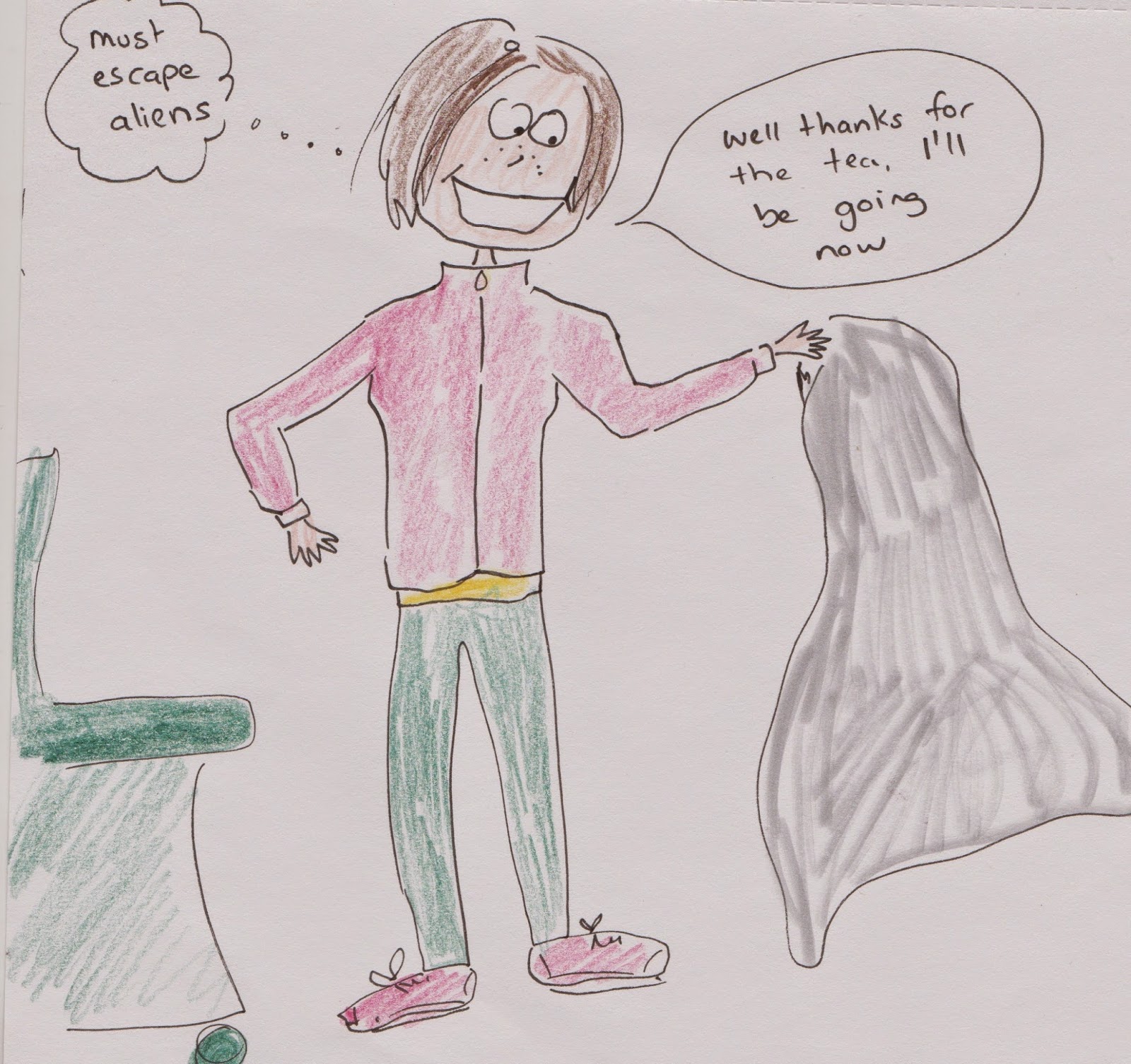 I got a lift home with my work people and hobbled to my bed. 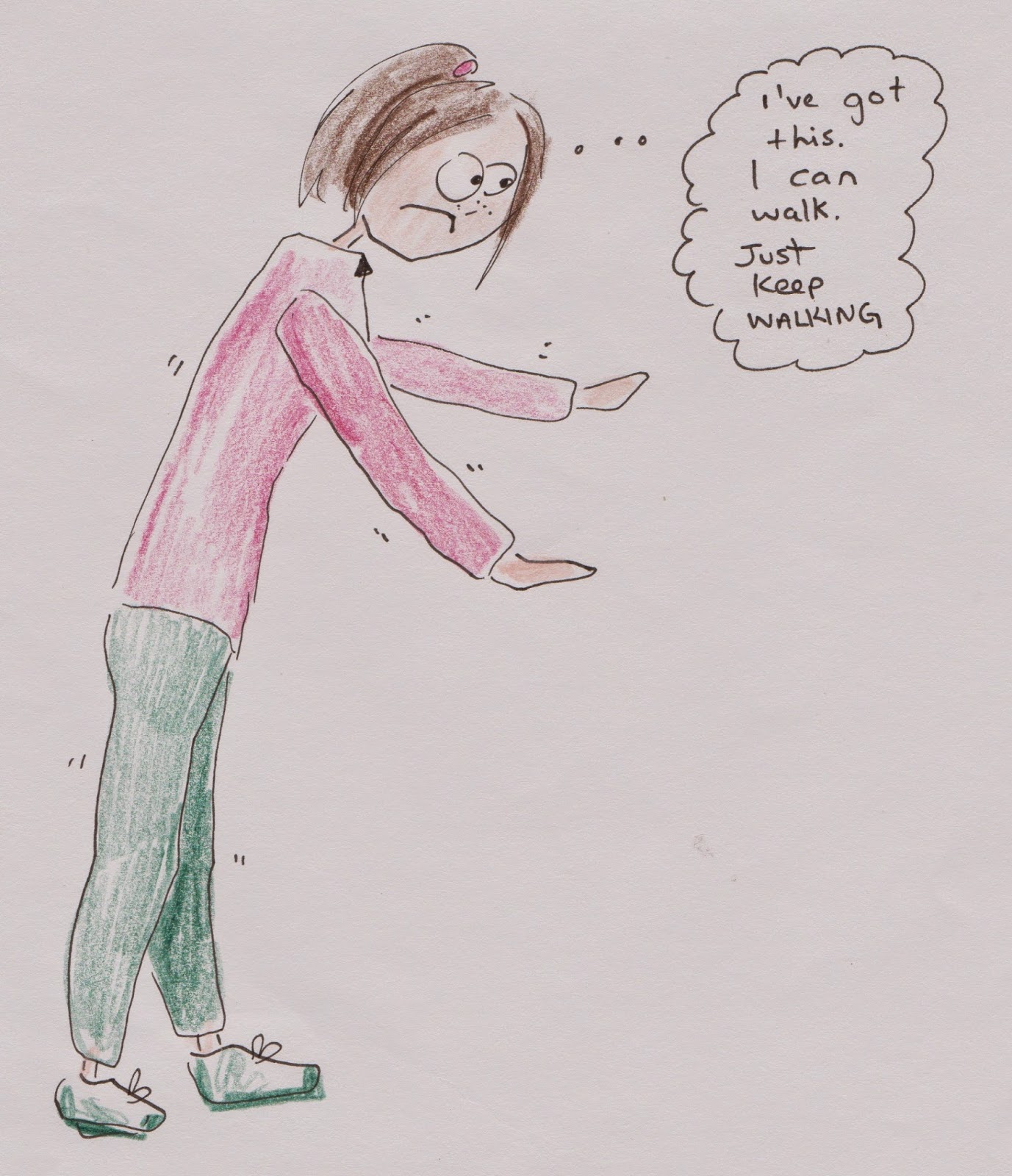 I was terrified of getting cold again, so I buried myself in hot water bottles. 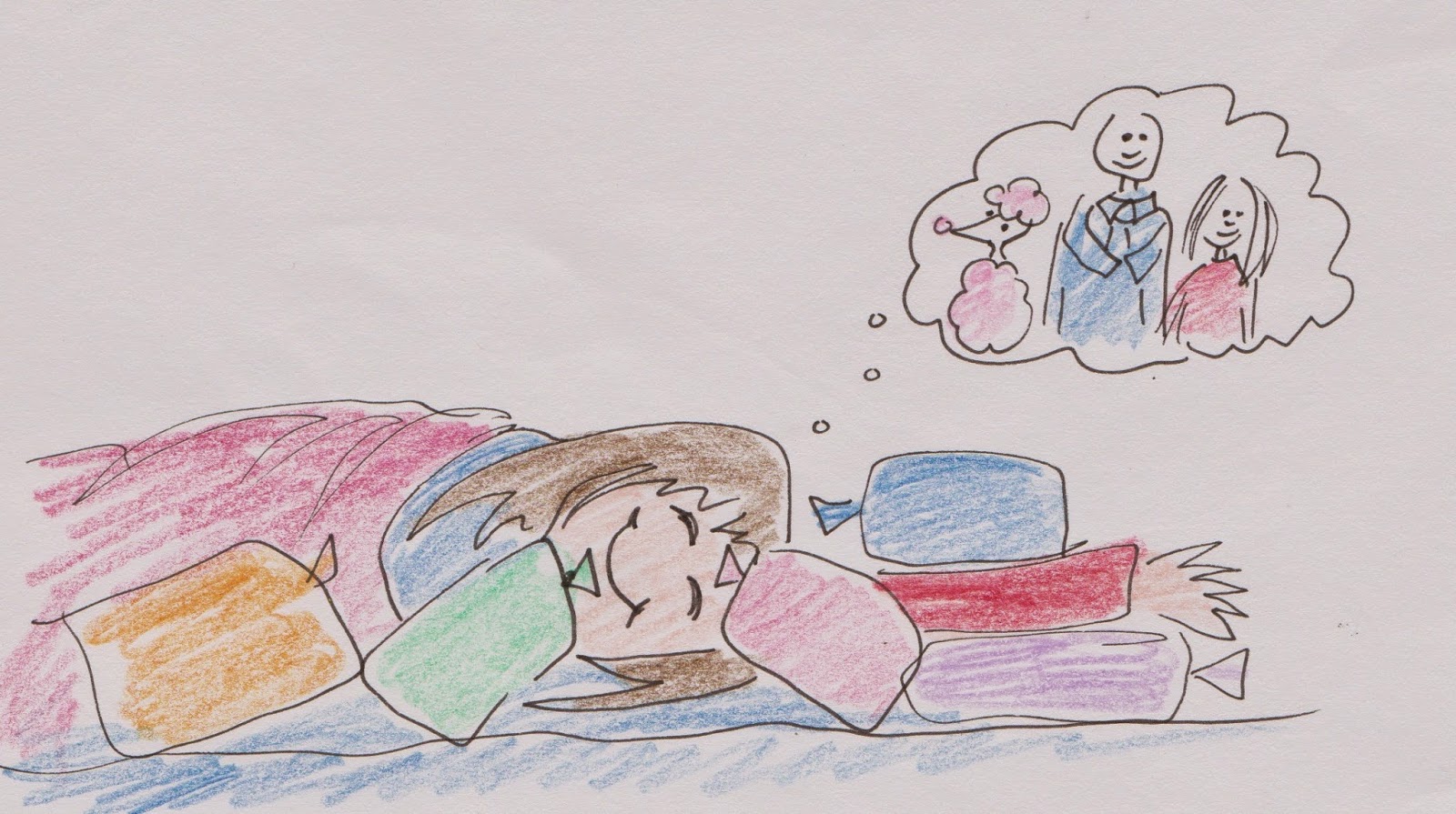 Posted by With all the Finesse of a Badger at 1:56 AM 2 comments: